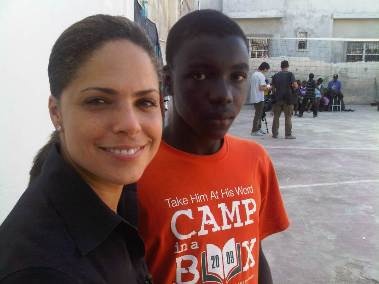 Photos: Courtesy Soledad O'Brien/CNN
In the wake of the Haitian earthquake, CNN's Soledad O'Brien rushed to the region to deliver the same sort of high-quality, eyewitness coverage that she has dependably broadcast in the past on location after location from such disaster areas as the Indian Ocean Tsunami and Hurricane Katrina. Because of her seemingly effortless style and her People Magazine's 50 Most Beautiful People List looks, what tends to get lost about this intrepid, Emmy-winning reporter is that she's also a Harvard grad with a keen intellect, a razor sharp wit, a great sense of humor and an ever-inquiring mind.
I've interviewed a bunch of bright people in my day and, trust me, Soledad might very well be the brightest. You'll instantly see what I mean, if you ever have the pleasure of engaging her in conversation one-on-one. Until then, I hope that this revealing tete-a-tete about the Haiti relief effort effectively conveys the essence of her brilliant mind and very likable spirit.
Soledad is never one to shy away from a difficult or probing question, but is rather refreshingly frank and forthcoming in addressing in considerable depth whatever issue she's asked to address. That's the reason I sought her out in the first place to get the scoop on what's really happening in Haiti.
Keep in mind that this interview was conducted soon after her return to the States, while she was cooking for and frequently distracted by a house full of rambunctious kids, and she even paused briefly from our conversation to pull one of her 5-year-old twins' baby teeth, all without ever missing a beat.

Kam Williams: Hi, Soledad, thanks again for the time.
Soledad O'Brien: Hey, how're you doing?
KW: Well, I guess my first question is, how's Haiti?
SO: Haiti's a mess for a host of reasons: because it's historically never been given a chance, because it currently has no real infrastructure, and because, of course, in the wake of the earthquake those factors combine to make for a country that's going to have a very slow recovery. These conditions don't exist in a vacuum but are correlated to how fast Haiti is going to be able to recover. There's a reason why people aren't getting food and other resources quickly, even when supplies have arrived to hand out, namely, that it's really hard to get to folks in the absence of an infrastructure.
KW: You also covered the tsunami and Katrina. How do these disasters compare to each other?
SO: To me, the scope of Katrina was so much bigger than where I was in Thailand. In Thailand, after a couple of days everyone could kind of get their act together, except for in the affected area which they needed to continue working on rebuilding. By comparison, Katrina was just giant, space-wise. As for Haiti, the damage caused by the earthquake is even more widespread than Katrina, and they have much less infrastructure. I found the same sort of devastation I saw in Port-au-Prince, when we drove to Jacmel and beyond. Plus, the population density in is so much greater in Haiti where they build homes right on top of each other into these hills. So, there was a domino effect when they collapsed, especially because of the substandard construction work.
KW: I write for a Haitian publication, Heritage Konpa Magazine, whose publisher, Rene Davis, is from a place called Petit-Goave located 30 miles outside of Port-au-Prince. He emailed me to say that still nothing in the way of help has reached his hometown.
SO: Part of the problem is just the logistics. Some of those places you can't reach simply because the roads are physically impassable. The other issue involves the challenge of delivering supplies to Haiti. Is the port open? How do you get shipments in? So, even right in Port-au-Prince, where you have such population density, you have a real problem just figuring out how to hand out stuff.
KW: Tony Noel wants to know, to what extent this is an international relief effort? Are there other countries contributing that might not be mentioned by the American mainstream press?
SO: Oh, yeah. Absolutely! What I found interesting from the getgo, when we went to the hospital in Jacmel, was that the first people I encountered were Cuban doctors. They already had a longstanding, joint project with Haiti, so they were the ones who immediately set up the outdoor, triage hospital. Those were Haitian and Cuban doctors. And at that hospital there were also medical teams from Costa Rica, Canada, Sri Lanka and the United States. It was truly an international response. No question. It was strange to be yelled at in so many different languages.
KW: After both 9/11 and Katrina, the Red Cross solicited donations but later admitted that it only distributed a small fraction of the funds raised during those ad campaigns. You were down there in Haiti. Laz Lyles asks, what's the most effective way people can help?
SO: From my perspective, I would wait now. They have a lot of immediate money in. And people have started bringing in supplies. The initial first phase of the crisis is over. The rebuilding effort is going to take so much time that whether I wanted to send $1,000, or $5,000 or even $50,000, I'd hold on and wait to see what's coming down the line, because that money is really going to be needed later. You might, for instance, be able to help rebuild a school, or some other project that nobody's thinking about right now. Wouldn't that be a wonderful way to help? But still, if you're not going to send any money when the hoopla dies down, then send it now. Otherwise, wait to see what projects emerge, because the initial response has been tremendous, financially.
KW: How did it feel to be in the midst of the continuing crisis?
SO: It's sort of the same feeling you get at any of these disasters. You don't have a 500 lb. bag of rice to feed people who are really hungry, or a dump truck to remove cement from a spot where someone might be trapped. It's frustrating, but I think I've sort of reconciled in my own head that my job is to bring notice to the world of these people's plight. And if I try to get involved in rescuing, too, I'll end up not doing either job very well. Although at one point, I helped out at an orphanage when an overwhelmed doctor pointed out a dehydrated baby that basically had about a couple of hours to live unless she got an IV. She was so dehydrated, it was obvious that she wasn't going to make it. After I got the IV in, I had never been so relieved in my life, because the risk had been so high. Fortunately, once we did get the IV running in her, she was fine.
KW: Well, thanks again for taking the time to share what you witnessed in Haiti with me and my readers.
SO: Thank you.

To see a video of Soledad O'Brien reporting about orphans in Haiti, visit:
http://www.youtube.com/watch?v=y1UKha9yoEw