Morgan Freeman was born in Memphis, Tenn. on June 1, 1937, but raised from infancy in Charleston, Miss. by his paternal grandmother. Every summer as a young child, he would visit his parents who had moved to Chicago, which is where he developed his love of the cinema.
He started acting at the age of 9, exhibiting promise as a lead character in a school play. Although he had won a statewide drama competition, upon graduating from high school, he opted to enlist in the Air Force rather than accept a college scholarship to pursue his true passion.
After being honorably discharged from the military in the late Fifties, Freeman decided it was time to take his shot at showbiz. But he struggled 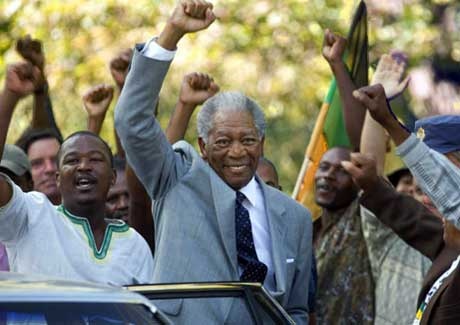 for years, first finding work as a dancer, then on the stage in a variety of modest company productions. Eventually, he made his way to Broadway where he debuted in "Hello Dolly" in 1968, which led to his landing a steady gig as Easy Reader on the children's TV series "The Electric Company."
He subsequently appeared on such soap operas as "Another World" and "Ryan's Hope" before finally landing his breakout role opposite Robert Redford in "Brubaker" in 1980. Hollywood soon took note, enabling the capable thespian to blossom into the universally-admired, consummate actor we've all enjoyed over the years.
A cursory glance at Mr. Freeman's resume' reveals a plethora of memorable hit movies, including "Lean on Me," "Glory," "Unforgiven," "Amistad," "Deep Impact," "Bruce Almighty," "Batman Begins," "Gone Baby Gone," "The Bucket List" and "The Dark Knight," to name a few. He delivered Oscar-nominated performances, in "Street Smart," "Driving Miss Daisy" and "The Shawshank Redemption" before finally winning that elusive Academy Award in 2005 for "Million Dollar Baby," which also earned Best Picture and Best Director honors for Clint Eastwood.
He reunited with Eastwood to make his latest picture, "Invictus," an uplifting, historical saga based on actual events which unfolded in South Africa shortly after the fall of the apartheid regime. Freeman, who still makes his home in Mississippi, spoke with me recently about his life, career and the challenge of portraying Nelson Mandela.

To see a trailer for Invictus, visit: http://www.youtube.com/watch?v=54HlG54IY6E