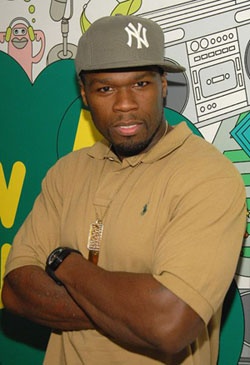 Curtis James Jackson, III, aka 50 Cent was born on July 6, 1975 in South Jamaica, Queens, where he was raised by his single-mom until she was murdered when he was only 8. He was taken in by his grandparents, but began hanging out with the wrong kids and began selling crack by the age of 12. While still a teenager, he was arrested and convicted for drug dealing, and turned his life around while serving out a six-month sentence.
After being paroled, he parlayed his street cred into an enviable career in gangsta-rap with the help of the late Jam Master Jay of Run-DMC, and the rest, as they say, is musical history. Here, he talks about his latest film, Streets of Blood, a crime thriller set in New Orleans and co-starring Val Kilmer.

Kam Williams: Hi 50, what interested you in making Streets of Blood?
50 Cent: I was looking to work with Robert DeNiro on this picture but ended up working with him on Righteous Kill. The script sat for a while, but once they got Kilmer involved I knew I had to do it.
KW: Tell me a little about your character, Stan Green.
50: My character Stan wants to play things straight but cannot provide the things his family needs and wants, so he makes some decisions that catch up with him.
KW: How did you prepare for the role?
50: I lost 25 pounds for the role of Stan. I wanted it to be realistic. I wanted the audience to believe I was vulnerable and in danger in parts of the film.
KW: How was it co-starring with Val Kilmer?
50: Amazing
KW: Is it true that you liked working with him so much that you gave him a classic car worth $100,000 as a gift after the shooting?
50: I gave Val Kilmer a '67 Impala as a gift for taking time to teach me some of the craft.
KW: I see you have already signed on to make eight more movies over the next couple of years. Which do you prefer, acting or music?
50: I am conditioned for music, although I like acting as you can tell a more complete story with a movie character than you can with a 3-minute song.
KW: When will your next CD, Before I Self Destruct, finally going to be released?
50: Very soon.
KW: The bookworm Troy Johnson question: What was the last book you read?
50: The 50th Law, written by myself & Robert Greene. I had to read my final edit in preparation for the Sept 8th release.
KW: The Rudy Lewis question: Who's at the top of your hero list?
50: Myself, as I have overcome so many obstacles
KW: What advice do you have for anyone who wants to follow in your footsteps?
50: [Kidding)] Don't try it! No, just be yourself as an artist and entrepreneur.
KW: Thanks for the time, 50.
50: Thank you.