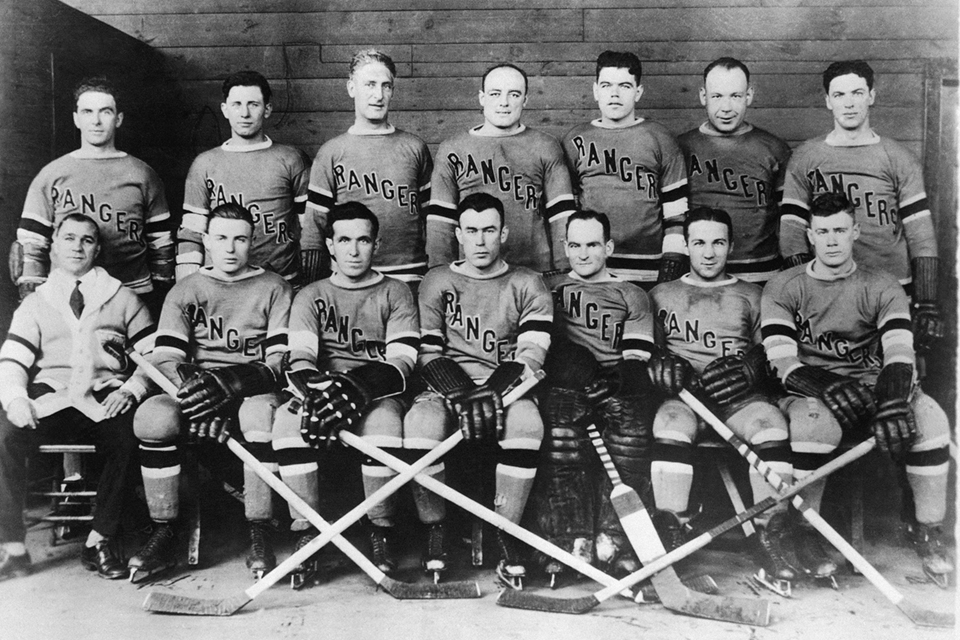 Taffy Abel carried the American flag at the 1924 Olympics, where his team won silver in hockey. Henry Elmer “Buddy” Maracle played 11 games in the early-1930s NHL. Paul Jacobs may have played in the league’s second season in 1918-19.

But in the commonly known history of hockey, a predominantly white sport in North America and Europe, these three men and others have been late to receive credit as Indigenous pioneers. Now, as part of a worldwide reckoning with prejudice, hockey historians are delving deeper into the role of some of the first nonwhite professional hockey players.

Historians agree that there were Indigenous players on the ice well before Willie O’Ree became the first Black player to skate in an NHL game in January 1958. O'Ree, who endured years of racism, was inducted into the Hockey Hall of Fame in 2018 and had his No. 22 retired this year.

There are no detailed demographical records from the NHL’s earliest years, the league and historians say. Because of that — and because some players hid or downplayed their own Indigenous or Asian heritage to avoid racist treatment — defining the sport’s trailblazers and who broke the so-called color barrier in the NHL is difficult at best and likely impossible to prove.

“It’s really hard to identify who was the first because if you go back into everyone’s certain ancestry, a lot of people will have Indigenous or other minority groups in them, so it’s hard to pinpoint,” hockey historian and author Ty Di Lello said. “There might be the first publicly known, but it’s probably near impossible just because so many people that had Indigenous or other minority backgrounds maybe didn’t look like it.”

Larry Kwong became the first player of Asian descent to appear in an NHL game — in 1948, a decade before O'Ree. And Di Lello and others wonder if there were Asian Americans or fellow Asian Canadians before Kwong, the son of two Chinese parents who was born in British Columbia. 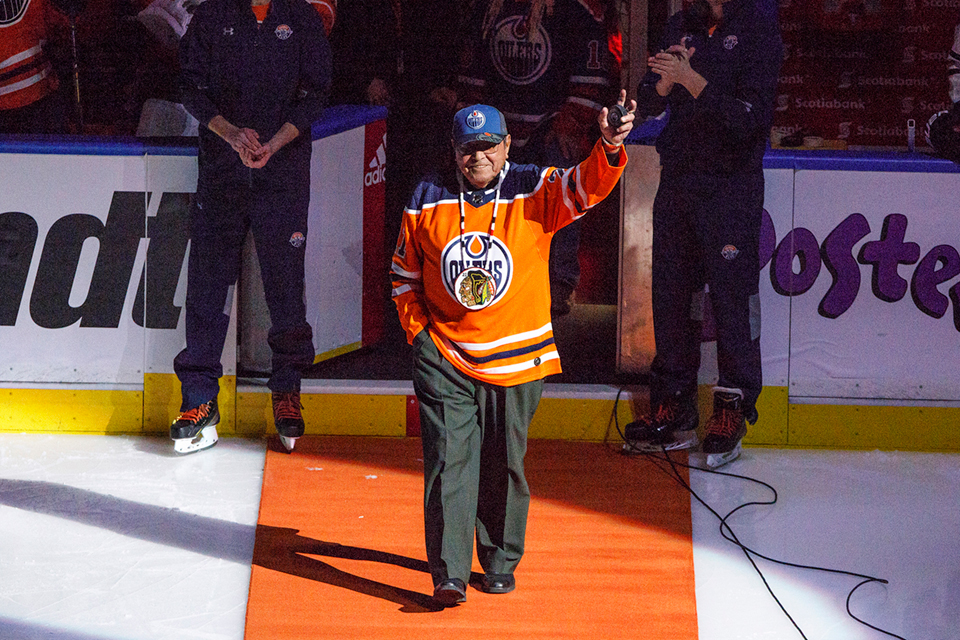 FILE - Former Chicago Blackhawks player Fred Sasakamoose is honored at the Edmonton Oilers-Chicago Blackhawks NHL hockey game Dec. 29, 2017, in Edmonton, Alberta. Sasakamoose is recognized as becoming the league's first Canadian aboriginal player in 1953, and he turned into a First Nations hero. But historians and the Hall of Fame would give that distinction to Mohawk player Paul Jacobs if he played in a game during the 1918-19 season. (Jason Franson/The Canadian Press via AP, File)

Fred Sasakamoose, who played 11 games in the mid-1950s, has long been recognized as the NHL's first Native Canadian player and became well known in the First Nations community. But historians and the Hall of Fame would give that distinction to Mohawk player Paul Jacobs — if he played in a game during the 1918-19 season, as may be the case.

Historical records are unclear and experts disagree on whether Paul Jacobs ever actually touched the ice. He was on the Toronto Arenas roster and, as the Hall of Fame notes, could have played in up to five games, which would make him the first nonwhite player in the NHL, which was formed in November 1917.

George Jones does not believe Jacobs played in a game and is adamant that Abel, his late uncle, deserves credit for breaking the league's color barrier in 1926. Jones has ramped up his effort to bring attention to Abel, a big defenseman who “passed” as white during his career before revealing his Native American heritage upon the death of his mother in 1939, five years after retiring.

“The reason he had to pass was not one of choice — it was one of survival,”

The NHL in a recent tweet heralded Abel as “a two-time Stanley Cup champion, ice hockey silver medalist at the 1924 Winter Olympics and one of the first known Native American players."

Celebrating the contributions Taffy, and the Native American community, brought and continue to bring to the game. #NHLIndigenousPeoplesHeritage #HockeyIsForEveryone pic.twitter.com/NVzHDkd9D3

Jones, who has taken his argument to Commissioner Gary Bettman and other league officials, said that's not enough. He wants acknowledgment from the NHL that Abel broke the league’s color barrier as its first nonwhite player, saying in an email: “Native American Taffy Abel was the first professional hockey player to break the NHL Color Barrier in 1926.”

League executives and researchers say they have looked into cases like Abel's and Maracle's and are not comfortable declaring a “first” among Native or Indigenous players because there's no way of proving it. Most NHL publications refer to O'Ree as the first Black player and Sasakamoose as the first Indigenous or First Nations player with treaty status.

It was more than a decade before Mike Marson became the NHL’s second Black player. More than 95% of current NHL players and nearly 84% of employees are white.

“The National Hockey League is determined to identify and celebrate the trailblazers on and off the ice who diversified our game — whether by being ‘first’ or by doing exemplary work," a league spokesperson said in an email to The Associated Press. "Understandably, record-keeping from the earliest days of the league — particularly as it pertained to the race and ethnicity of our players — was not what it is today. This complicates efforts to definitively identify individuals as the first of any particular group, but it does not diminish the contributions of these pioneers.”

The NHL has been reckoning with matters of race in recent years and it has become increasingly clear how much people of color shaped the history of hockey.

That includes Native American and First Nations players. Beyond Jacobs, Abel, Maracle and Sasakamoose, there are almost certainly many more whose tales are still unknown. Dan Ninham started the North American Indigenous Athletics Hall of Fame in the hopes of finding more.

"There are so many Indigenous athletes and hockey players out there," Ninham said. “They’re out there, and this is one of the ways we want to get their names and who they are out there and to continue their legacies.”

Those legacies are complicated. Sam McKegney of Queen's University in Kingston, Ontario, and one of the creators of the Indigenous Hockey Research Network, argues national policies specifically in Canada discouraged members of the Indigenous peoples from embracing their heritage and used hockey in boarding schools as a way of pushing children from the First Nations to assimilate to white culture.

Avoiding boarding school and making it to the NHL, Jones said, is why Abel and his family kept being Native American a secret. He's almost certainly not alone. 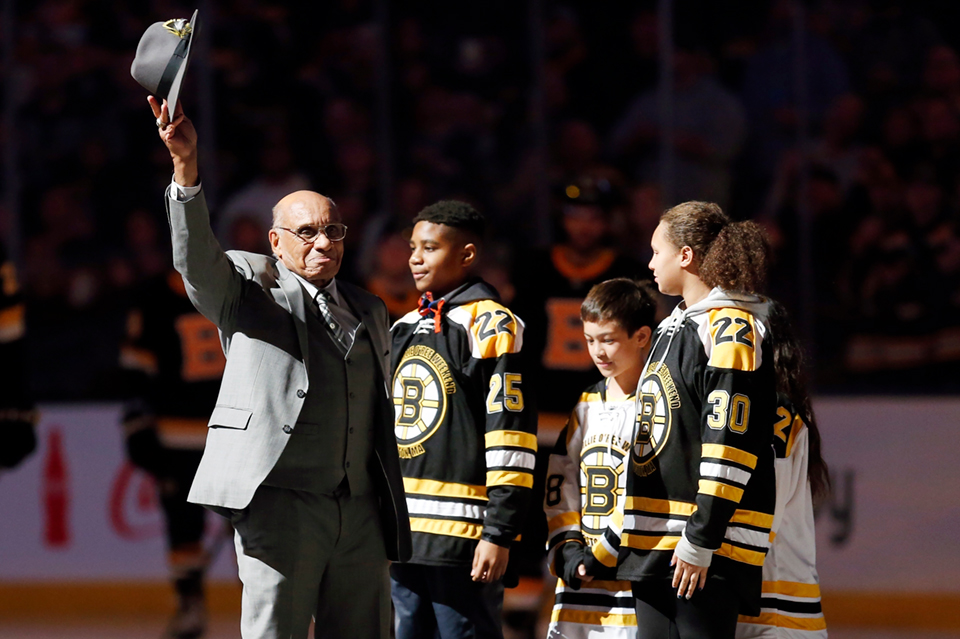 FILE - Hockey Hall of Famer Willie O'Ree, left, waves to the crowd before dropping the ceremonial puck before an NHL hockey game between the Boston Bruins and the Edmonton Oilers in Boston, Jan. 4, 2020. The first elite Indigenous hockey players played well before Willie O’Ree became the first Black player to skate in an NHL game in January 1958. (AP Photo/Michael Dwyer, File)

More than 150,000 Native children in Canada were forced to attend state-funded Christian schools from the 19th century until the 1970s in an effort to isolate them from their homes and culture. The aim was to Christianize and assimilate them into mainstream society, which previous Canadian governments considered superior.

“We’re at a moment of Indigenous resurgence,” McKegney said. “Reclamation of history is going to illuminate people whose stories haven’t yet been told or haven’t been understood in the public light. I do think that we’re going to hear more of these stories.”