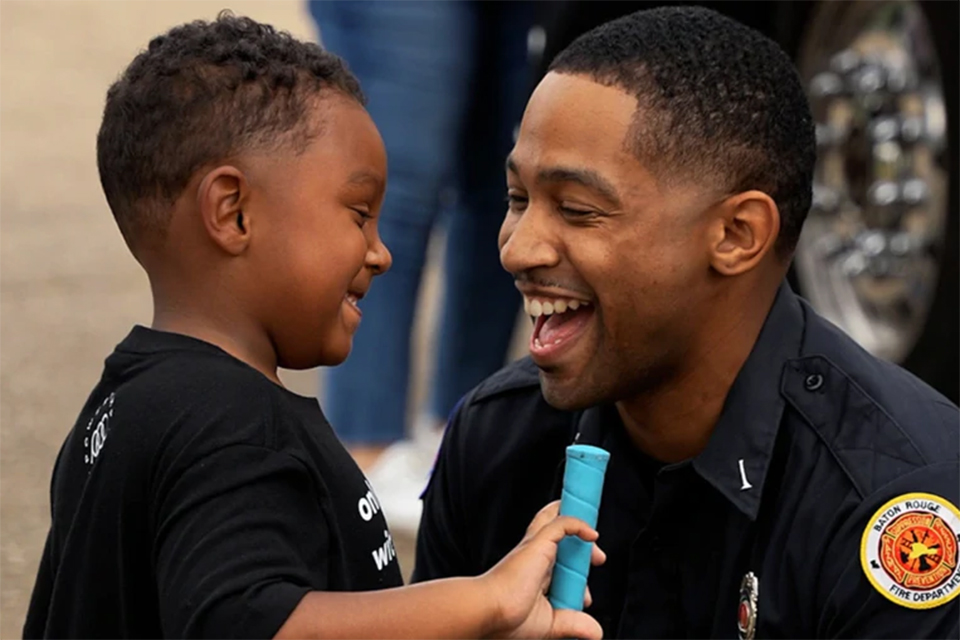 This joy makes the world go round!

“As a newborn, Rossy was hospitalized for jaundice and we noticed his eyes were twitching…We don’t know for sure what Rossy can see, but if you imagine putting a slice of Swiss cheese over your eyes, you would have pockets of vision,” Armstrong explained.

Today, Rossy uses a cane to get around and attends the Louisiana School for the Visually Impaired. Recently, Ross and Victoria visited his school to film a campaign for the non-profit Blind Grace. While there, they ran into Rossy on the way back to his classroom. Armstrong took to social media to share the moment he captured on video.

In the video, you can see 5-year-old Rossy walking through the corridor alone, his dad waiting unexpectedly. Just as he passes him, Armstrong says “Hi Rossy.”

“That’s daddy! Hey, daddy!,” Rossy exclaims as he walks toward the camera.

“Had the opportunity to see my Rossy at school today. He was walking from lunch and I was waiting in his pathway! His excitement brought me happiness and I wanted to share it with y’all! He’s so sweet,” Armstrong captioned the post.

To date, the video has been liked more than 4 million times, many taking to the comments to thank Armstrong for sharing the precious moment with the world.

But the super-dad didn’t stop there. The next week, Armstrong made sure Rossy was taken to school in a big blaring, red engine firetruck. Armstrong, a Baton Rouge firefighter, said he was grateful to the department for showing up for Rossy and treating him like the superstar he is. He hopes the content he shares with all of his children, Rossy, his 13-year-old son Jaden and infant daughter Cecelia, will continue to make people happy.

“I want these videos to be a catalyst for joy,” said Armstrong.

It definitely brought us joy! Sending so much love to Rossy and the family!