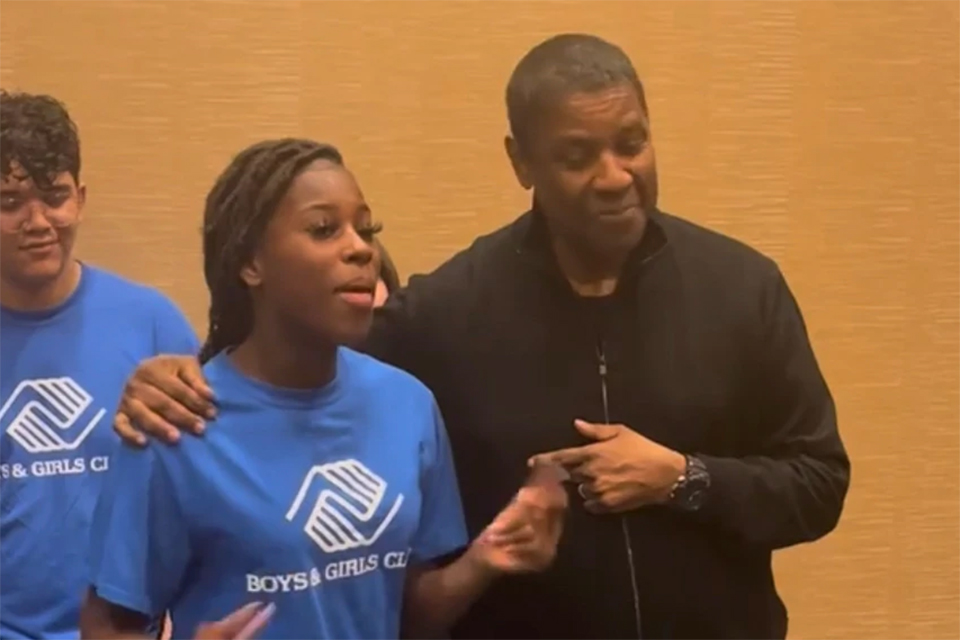 Denzel Washington recently joined a group of kids at the Boys & Girls Club national conference in an inspirational sing-along of “Stand by Me.”

According to Forbes, Washington has been a national spokesperson for the Boys & Girls Clubs of America (BGCA) for more than 25 years. The two-time Academy Award winner’s relationship with the club dates back to his childhood, Washington joining the Mount Vernon, New York chapter when he was just five years old. Over the weekend, he joined the organization for their national conference in Chicago.

Youth of the Year

There, Washington was present for the announcing of the Club’s 2021-22 National Youth of the Year, Brianna P. Brianna, who has been involved with BGCA since she was nine, was awarded a $72,500 scholarship and a new Toyota Corolla for her service. The Connecticut resident and aspiring social worker said she’s put in a lot of work over the years with the organization and she’s grateful to have had the experiences, noting that other Boys & Girls Clubs members are just as deserving as her.

“I was surprised once my name was announced but I know that I worked really hard for it…I know that I deserve the award and every single person that was [a nominee] deserves it as much as I do…every single one of them deserves the opportunity and the same exact thing that I’m getting from this,” said Brianna.

During a speech to the organization's thousands of employees, Washington emphasized the gratitude he feels for all of the work they do.

“All of you have proven that you need and deserve to be at the table when the issues facing our children must be addressed. Because when essential workers needed essential services for their children, you stepped up to provide those services. Because when many of our communities witnessed and experienced civil unrest, community leaders and law enforcement relied on you, club staff, to bring understanding and civility back to their communities.

While connecting one-on-one with various Club affiliates, Washington also took the time out to meet with a group of youth participants, joining them in an inspiring rendition of Ben E. King's “Stand by Me.” Visibly moved by the young singer Melvonia, a member of the Boys & Girls Clubs of Middle Tennessee, Washington joined in the chorus as the room erupted in excitement and song.

“Here’s my promise to you all, as a sixty-something… year member of the Boys & Girls Club, I promise to stand by you. I promise you that, I’ll always be there,” he told the group.

Check out the heartwarming moment below!

A post shared by Boys & Girls Clubs of America (@bgca_clubs)