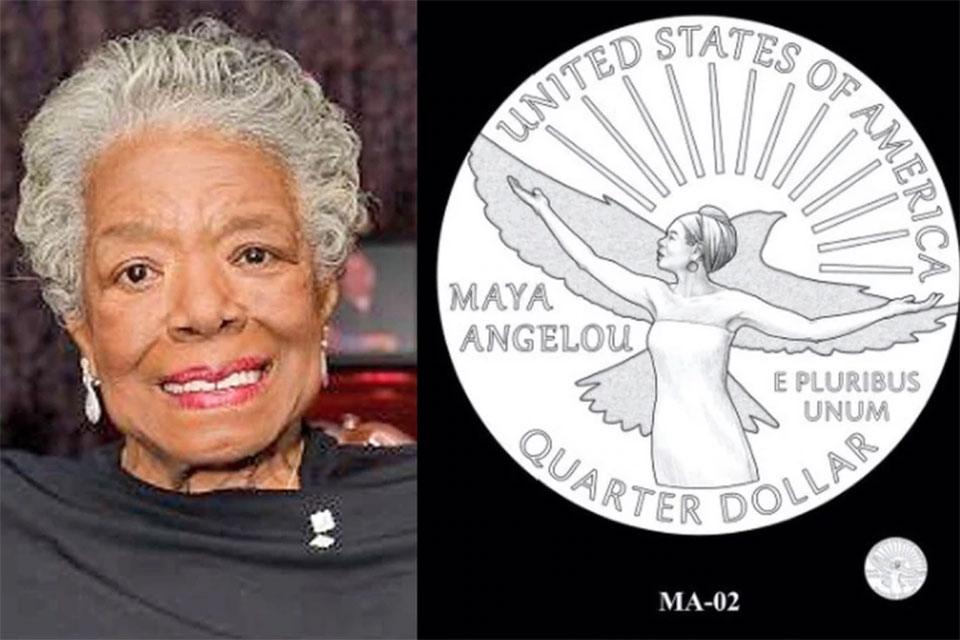 The Maya Angelou quarters from the U.S. Mint are finally being rolled out, ABC 7 News reports.

Last year, it was announced that Dr. Maya Angelou would make history as the first Black woman to be featured on a U.S. coin under the new American Women Quarters Program by the U.S. Mint. Senators Deb Fischer and Catherine Cortez Masto were first to introduce the program, which was passed in 2020. Now, the United States Mint has begun shipping the first quarters featuring an image of iconic poet Maya Angelou.

"These past 100 years of suffrage would not have been possible without the work of so many courageous women, whose efforts paved the way for many more to make crucial contributions to the history of the United States," Fischer and Cortez Masto previously told reporters.

The quarter features a depiction of Angelou in front of a bird in flight and a rising sun with outstretched arms, inspired by her 1969 autobiography, “I Know Why the Caged Bird Sings.”

First of a series

The program will release 20 quarters over the next four years paying homage to women who have been crucial in shaping American history. While George Washington’s face will remain on the head’s side of the coin, the tail’s side will be tailored to highlight the influential women.

Sen. Cortez Masto said she believes that Angelou is the perfect choice for the first coin.

“This coin will ensure generations of Americans learn about Maya Angelou’s books and poetry that spoke to the lived experience of Black women,” she said via statement.

Angelou will be featured on the coin along with other influential women including the first woman astronaut, Sally Ride, Wilma Mankiller, the first woman principal chief of the Cherokee Nation, Nina Otero-Warren, one of the key leaders in New Mexico’s suffrage movement, and Anna May Wong, the first Chinese American Hollywood star.

Janet Yellen, the first woman Treasury Secretary, spoke about the significance of the new coins, saying, “Each time we redesign our currency, we have the chance to say something about our country...I’m very proud that these coins celebrate the contributions of some of America’s most remarkable women, including Maya Angelou.”

We can’t wait to get our hands on these collectible coins!