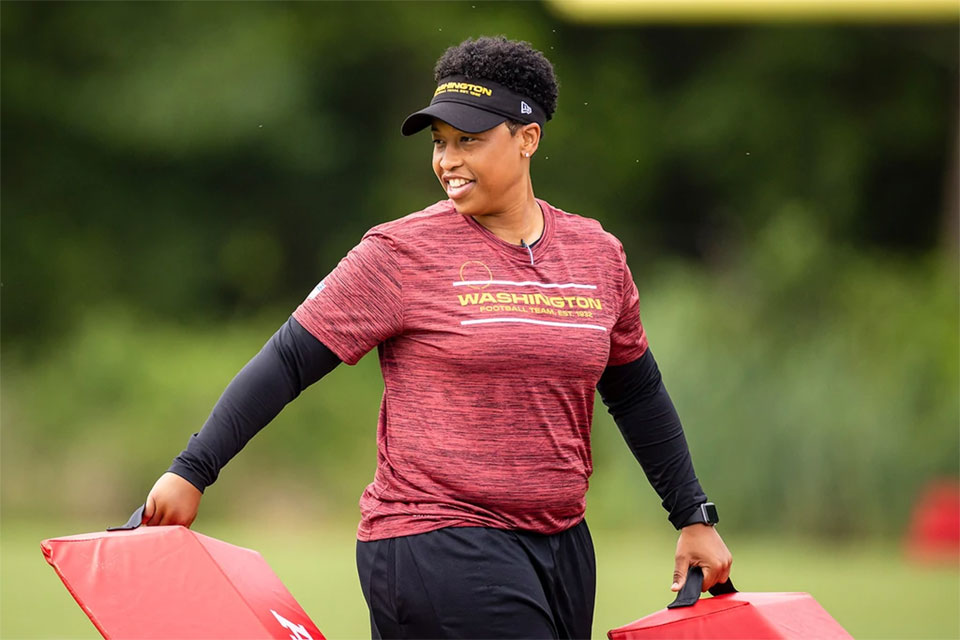 Back in January, King made history as the first Black woman to become a full-time assistant coach with the National Football League (NFL), working with the Washington Football Team (WFT). King is one of just two full-time women assistant coaches in the league, alongside Tampa Bay defensive line coach Lori Locust.

WFT running backs coach Randy Jordan praised King’s appointment at the time, saying, “First of all, she knows the game. It’s really helped me in terms of seeing the game in a different view...When we first started, I leaned on her a lot in terms of the terminology and the different things. Then, the way she’s worked with the guys, she’s just Coach King to us. Her input throughout the game, there are things I may not see, and she’ll point it out to me...Her input is very, very important not only to me, but to the entire staff. She’s been doing a heck of a job.”

Now, King has made history again. This past week, when the WFT faced off against the Philadelphia Eagles, they came up short handed, missing seven assistants due to COVID-19, including Jordan. That’s when the team decided to promote King to be the game day running backs coach, making history as the second woman game day coach and the first Black women to hold the position in league history.

While King has not yet spoken on the momentous occasion, she previously spoke about her historic appointment and the importance of continuing to champion diversity in the NFL.

“Being the first Black female full-time NFL coach is super special to me, and it’s very important for me to do a good job and just to be a good role model and a symbol of representation. I think it’s important to have diversity in football as it’s important to have diversity everywhere. There’s so many different points of view and backgrounds, and people bring different ideas to the table that are important. It was interesting to see so many playoff teams last season had women involved on their staff,” said King.

Congratulations, Coach King! Thank you for being an inspiration on and off the field.