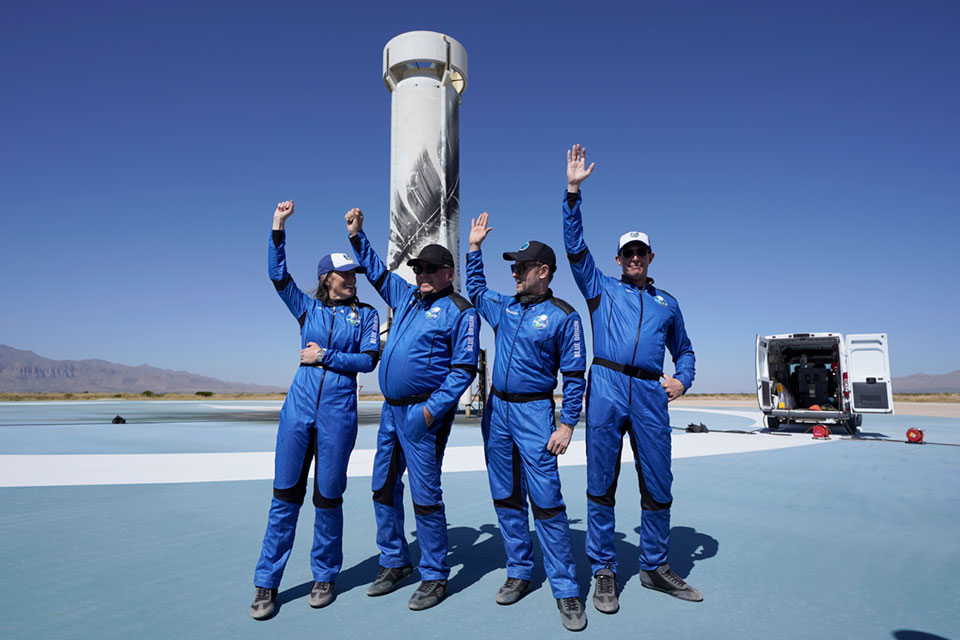 The “Star Trek” actor and three fellow passengers hurtled to an altitude of 66.5 miles (107 kilometers) over the West Texas desert in the fully automated capsule, then safely parachuted back to Earth. The flight lasted just over 10 minutes.

“What you have given me is the most profound experience," an exhilarated Shatner told Bezos after climbing out the hatch, the words spilling from him in a soliloquy almost as long as the flight. “I hope I never recover from this. I hope that I can maintain what I feel now. I don’t want to lose it.”

He said that going from the blue sky to the utter blackness of space was a moving experience: "In an instant you go, `Whoa, that’s death.' That’s what I saw.”

Shatner became the oldest person in space, eclipsing the previous record — set by a passenger on a similar jaunt on a Bezos spaceship in July — by eight years. The flight included about three minutes of weightlessness and a view of the curvature of the Earth.

Sci-fi fans reveled in the opportunity to see the man best known as the brave and principled commander of the starship Enterprise boldly go where no star of American TV has gone before. The internet went wild, with Trekkies quoting favorite lines from Kirk, including, “Risk: Risk is our business. That’s what this starship is all about.”

“This is a pinch-me moment for all of us to see Capt. James Tiberius Kirk go to space,” Blue Origin launch commentator Jacki Cortese said before liftoff. She said she, like so many others, was drawn to space by shows like “Star Trek.”

NASA sent best wishes ahead of the flight, tweeting: "You are, and always shall be, our friend.” 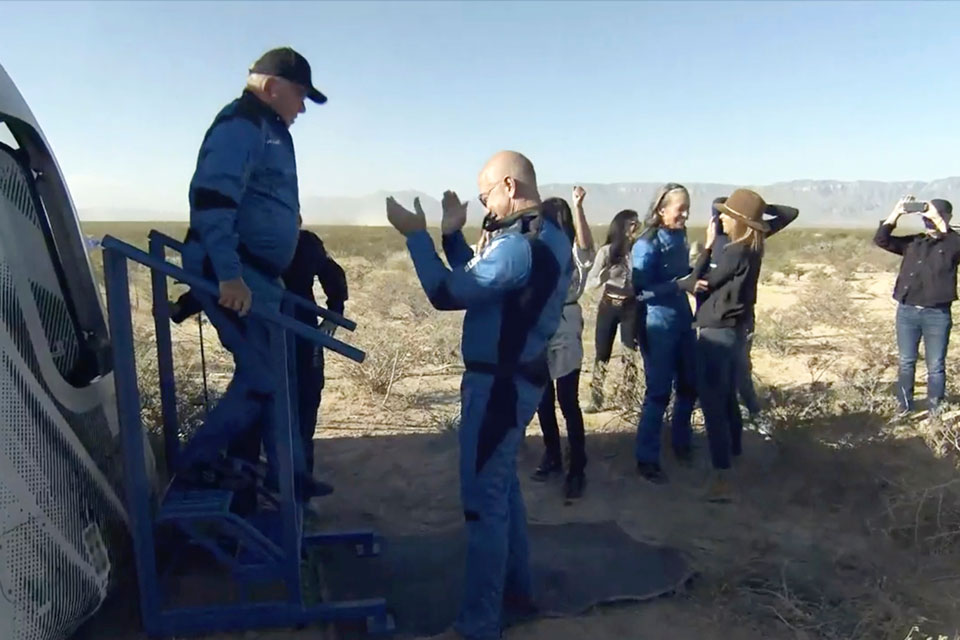 In this image provided by Blue Origin, William Shatner exits the Blue Origin capsule as he is greeted by Jeff Bezos near Van Horn, Texas, Wednesday, Oct. 13, 2021. The “Star Trek” actor and three fellow passengers hurtled to an altitude of 66.5 miles (107 kilometers) over the West Texas desert in the fully automated capsule, then safely parachuted back to Earth in a flight that lasted just over 10 minutes. (Blue Origin via AP)

The flight brought priceless star power to Bezos’ space-tourism business, given its built-in appeal to baby boomers, celebrity watchers and space enthusiasts. Shatner starred in TV’s original “Star Trek” from 1966 to 1969, when the U.S. was racing for the moon, and went on to appear in a string of “Star Trek” movies.

Bezos is a huge “Star Trek” fan — the Amazon founder had a cameo as an alien in one of the later movies — and Shatner rode free as his invited guest.

As a favor to Bezos, Shatner took up into space some “Star Trek” tricorders and communicators — sort of the iPhones of the future — that Bezos made when he was a 9-year-old Trekkie. Bezos said his mother had saved them for 48 years. 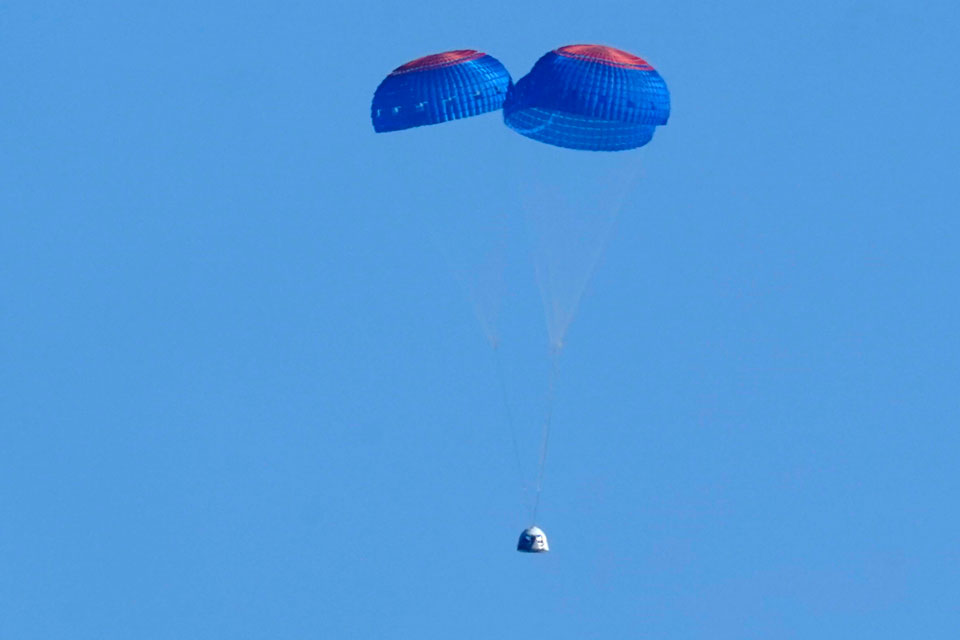 Bezos himself drove the four crew members to the launch pad, accompanied them to the platform high above the ground and cranked the hatch shut after they climbed aboard the 60-foot rocket. He was there to greet them when the capsule floated back to Earth under its brilliant blue-and-red parachutes.

“Hello, astronauts. Welcome to Earth!" a jubilant Bezos said as he opened the hatch of the New Shepard capsule, named for first American in space, Alan Shepard.

Shatner and the others wore close-fitting, flame-retardant, royal-blue flight suits, not exactly the tight, futuristic-for-the-’60s V-necks that the crew of the Enterprise had on TV.

The actor said he was struck by the vulnerability of Earth and the relative sliver of its atmosphere.

“Everybody in the world needs to do this. Everybody in the world needs to see," he said. “To see the blue color whip by, and now you’re staring into blackness, that’s the thing. The covering of blue, this sheath, this blanket, this comforter of blue that we have around, we say, ‘Oh, that’s blue sky.’ And then suddenly you shoot through it all, and you’re looking into blackness, into black ugliness.”

Shatner said the return to Earth was more jolting than his training led him to expect and made him wonder whether he was going to make it back alive.

“Everything is much more powerful," he said. “Bang, this thing hits."

"That wasn’t anything like the simulator. ... Am I going to be able to survive the G-forces?"

Passengers are subjected to nearly 6 G’s, or six times the force of Earth’s gravity, as the capsule descends. Blue Origin said Shatner and the rest of the crew met all the medical and physical requirements, including the ability to hustle up and down several flights of steps at the launch tower.

Shatner going into space is “the most badass thing I think I’ve ever seen,” said Joseph Barra, a bartender who helped cater the launch week festivities. “William Shatner is setting the bar for what a 90-year-old man can do.”

The flight comes as the space tourism industry finally takes off, with passengers joyriding aboard ships built and operated by some of the richest men in the world.

Virgin Galactic’s Richard Branson went into space in his own rocket ship in July, followed by Bezos nine days later on Blue Origin’s first flight with a crew. Elon Musk’s SpaceX made its first private voyage in mid-September, though without Musk on board.

Last week, the Russians launched an actor and a film director to the International Space Station for a movie-making project.

Blue Origin said it plans one more passenger flight this year and several more in 2022. Sounding like the humane and idealistic Captain Kirk himself, the company said its goal is to “democratize space.”

Shatner strapped in alongside Audrey Powers, a Blue Origin vice president and former space station flight controller for NASA, and two paying customers: Chris Boshuizen, a former NASA engineer, and Glen de Vries of a 3D software company. Blue Origin would not divulge the cost of their tickets.

The flight brought to 597 the number of humans who have flown in space. 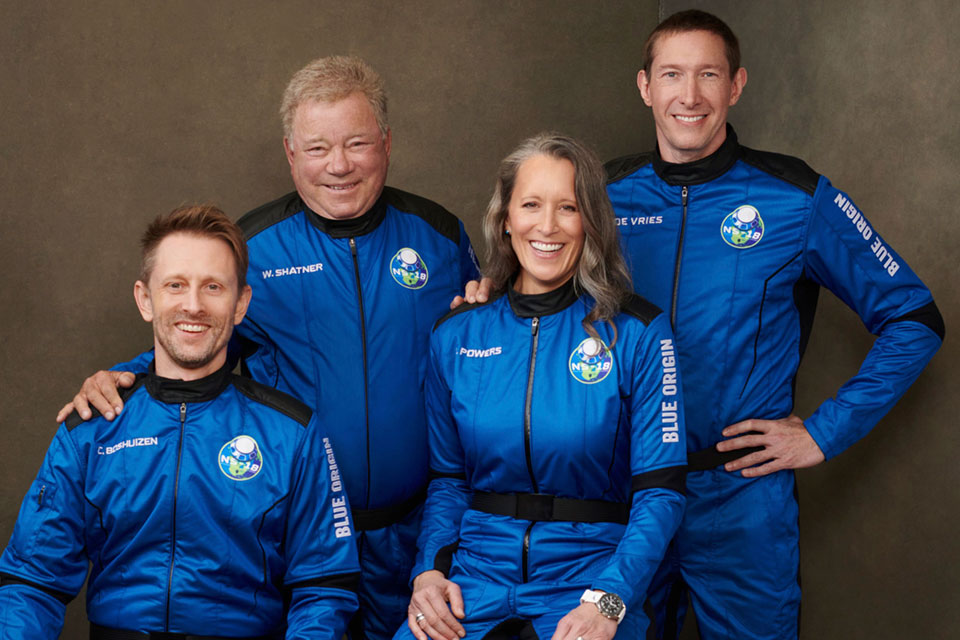 “Today’s launch is a testimony to the power of the imagination, and we should not lose sight of that power,” University of Rochester astrophysicist Adam Frank said in an email.

“William Shatner may be `just an actor,' but Captain James T. Kirk represents a collective dream of a hopeful future in space that ‘Star Trek,' and science fiction in general, gave us all,” Frank continued. “Bezos gave Shatner a seat on his rocket because he, like millions of others, fell in love with ‘Star Trek’ and its vision of a boundless frontier for humanity.”