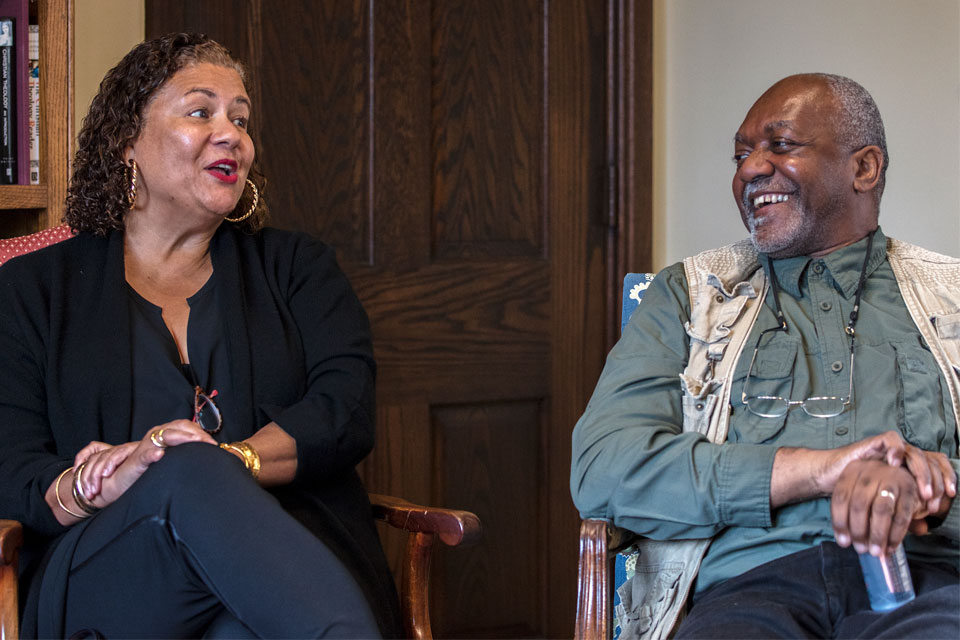 Washington National Cathedral stained glass window depicting confederate general Robert E Lee is one of the windows to be replaced. (Photo courtesy of Washington National Cathedral)WASHINGTON – The Washington National Cathedral today announced that it will replace its former stained-glass windows featuring Confederate iconography, removed in 2017, with racial-justice themed windows created by world-renowned artist Kerry James Marshall, described by The New Yorker as “a virtuoso of landscape, portraiture, still-life, history painting, and other genres of the Western canon.” The cathedral’s commission represents Marshall’s first time working with stained-glass as a medium, and the windows are expected to be his first permanent public exhibition anywhere in the country.

In addition, celebrated poet, author, and scholar Elizabeth Alexander, PhD., has agreed to pen a new poem that will be inscribed in stone tablets alongside Marshall’s window installation, overlaying the previous stone tablets which venerated the lives of Confederate soldiers. Completion of both Marshall’s new windows and the stone tablets featuring Alexander’s new poem is expected in 2023, at which time they will be permanently installed at the cathedral.

The cathedral removed windows featuring Confederate Generals Robert E. Lee and Thomas “Stonewall” Jackson—which were located along the southern face of its nave, or its main worship space—in September 2017, following the white nationalist violence in Charlottesville, Virginia. In the summer of 2020, amid the historic movement for racial justice following the police killing of George Floyd, the cathedral began collaborating with the Smithsonian’s National Museum of African American History and Culture (NMAAHC) to plan the public exhibition of the Robert E. Lee window.

“For nearly 70 years, these windows and their Confederate imagery told an incomplete story. They celebrated two generals, but they did nothing to address the reality and painful legacy of America’s original sin of slavery and racism. They represented a false narrative of what America once was and left out the painful truth of our history,” said The Rev. Randolph Marshall Hollerith, dean of Washington National Cathedral.

“We’re excited to share a new and more complete story, to tell the truth about our past and to lift up who we aspire to be as a nation.”

Marshall—the artist and professor whose paintings depicting Black life in America have been sold, viewed, and showcased across the world for decades—will design the stained-glass windows that will replace the Lee/Jackson windows. His new windows will reflect the Cathedral’s stated desire for new windows that “capture both darkness and light, both the pain of yesterday and the promise of tomorrow, as well as the quiet and exemplary dignity of the African American struggle for justice and equality and the indelible and progressive impact it has had on American society.” Marshall has taught painting at the University of Illinois at Chicago and has been named to TIME’s annual list of the 100 most influential people in the world.

“This project is not just a job—I don’t need the work—or only a piece of art.

"It’s kind of a calling, and a real honor to be asked,” said artist Kerry James Marshall.

“The themes that the Cathedral committee articulated set a great challenge for me as an artist and as a Black American man. The goal is to make truly meaningful additions to an already rich and magnificent institution, to make the changes they have embraced truly worth the effort.”

As a decorated poet, educator, memoirist, scholar, cultural advocate, Washington DC native, and president of The Andrew W. Mellon Foundation, Alexander dedicated decades of her life and work to the pursuit of creating and telling more truthful representations of our collective history—a theme she will explore in her commissioned poem for the cathedral. She has held distinguished professorships at Smith College, Columbia University, and Yale University, where she taught for 15 years and chaired the African American Studies department. In 2009 Alexander composed and delivered “Praise Song for the Day” for the inauguration of President Barack Obama, and is author or co-author of 14 books, including Pulitzer finalists American Sublime and, The Light of the World.

“I grew up in Washington DC and spent time throughout my childhood in the hallowed Cathedral.

"I am incredibly honored to be a part of the National Cathedral’s effort to ensure that those who worship within its sanctuary know that it is truly a space for all people, and that the stories relayed through its sacred walls, windows and other iconography represent the truth of our nation,” said Dr. Elizabeth Alexander. “I’m delighted to work in close collaboration with my dear friend of over thirty years Kerry James Marshall on this inspiring project for the Cathedral as we consecrate its sacred space with our artistic work.”