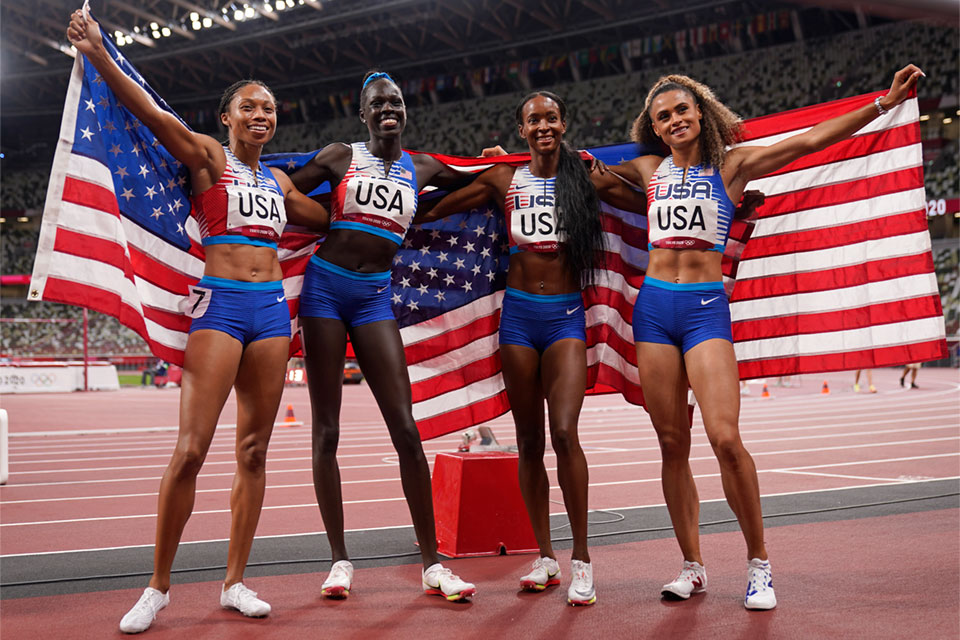 She made her record-setting 11th trip there Saturday, after starring as the headliner on a 4x400 relay win that featured a who's who of American running.

With the gold medal dangling from her neck and "The Star-Spangled Banner" playing in the near-empty stadium, Felix said

After the final race of the final Games of the 35-year-old sprinter's career, Felix leaves the stage having won the most medals of any track athlete in U.S. history. It's some list. She passed Carl Lewis, and now she only trails one person in the Olympic record book — Paavo Nurmi — the Finnish distance runner who won 12 between 1920 and 1928.

Felix, who a day earlier took bronze in the 400 meters to become the most decorated woman in Olympic track, has no plans to go any further. In her mind, as a sprinter at least, she also has nothing left to prove.

“I feel at peace,” she said. “I went out, had all the confidence in these amazing women. I wanted to take it all in one last time around, and it was special.” 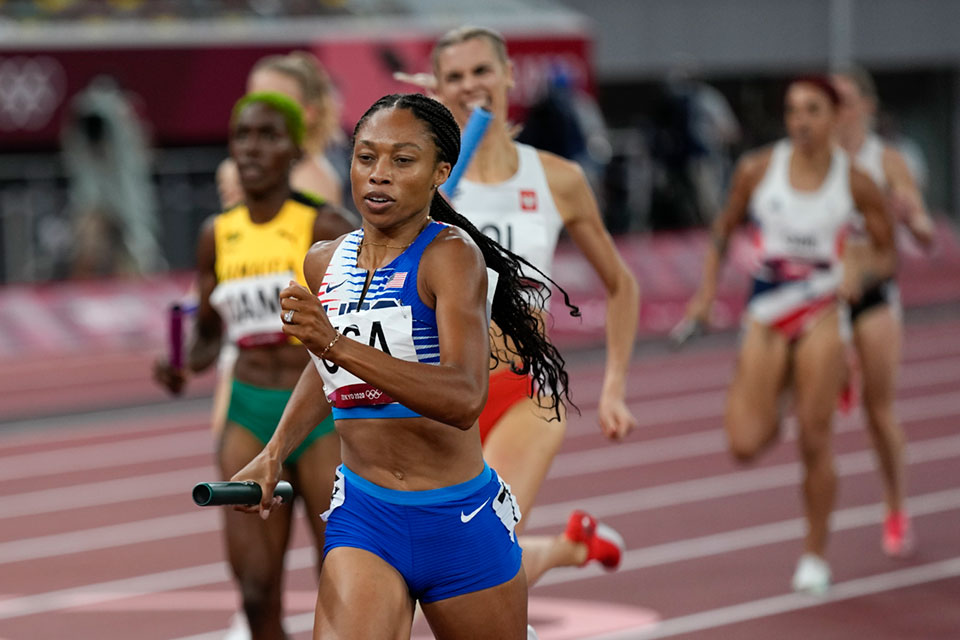 She still plans to sound an active voice for women, and especially for mothers who too often hear what she heard when she got pregnant with her now 2-year-old daughter, Cammy: That once women start having babies, their best athletic days are behind them.

But if she had any concerns about the future of her sport on the track, the 3 minute, 16.85-second jaunt she was part of in her last Olympic race — good for a 3.68-second romp over Poland — certainly put those to rest.

It was a 19-year-old, Athing Mu, who ran the anchor leg to secure Felix's medal — the seventh gold in her collection of 11.

Sydney McLaughlin, the 400-meter hurdles world-record holder, celebrated her 22nd birthday by running the opening lap. She handed to Felix, who handed to another hurdler, Dalilah Muhammad, who is 31.

They had two things in common:

— All won medals in their individual races over the nine days in Tokyo.

McLaughlin and Muhammad are friendly rivals in the hurdles, where they went gold-silver. Mu won gold in the 800. Felix has always considered herself more of a 200 runner. Three of her 11 medals have come at that distance. Six of the medals have come in relays. All of those ones have been gold.

“I was just honored," Muhammad said of her reaction when she was presented with Saturday's eclectic lineup. “Of course she earned it, but she's so deserving of it, too. I've just been inspired by her throughout my entire career.”

Felix wasn't the only inspirational woman on the track on closing night. 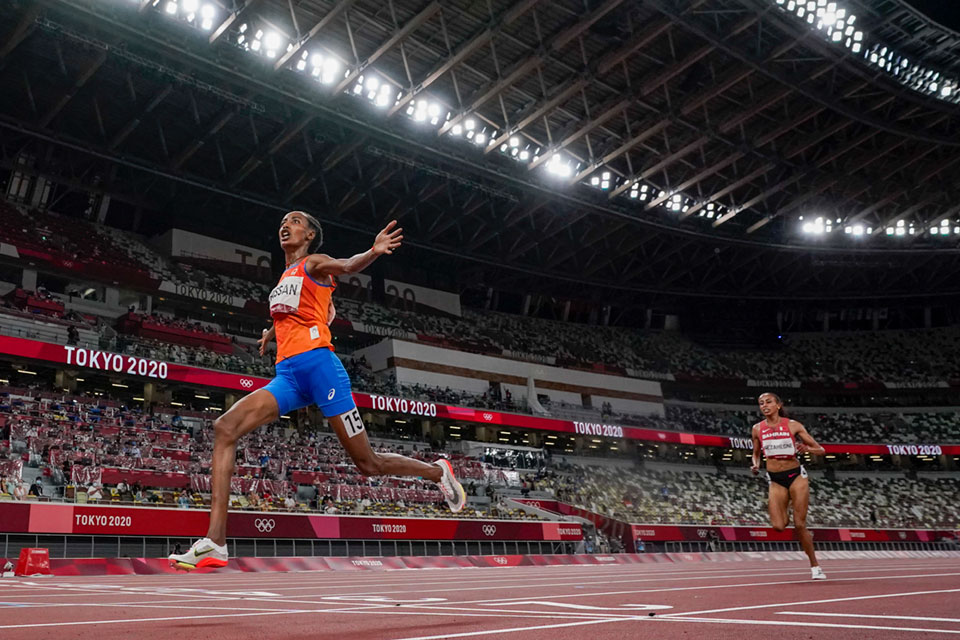 She said she had lost all feeling in her neck and her arms by the end. Well after she crossed the finish, she was sitting beneath the bleachers, spitting up into a cup. She walked away with gold in the 5 and 10K, a bronze in the 1,500, and hopefully an ice bath in her very near future.

“I wanted to celebrate,” she said, “but when I finished, I just fell down.”

Also in celebration mode was the U.S. men's relay team. The combo of Michael Cherry, Michael Norman, Bryce Deadmon and hurdler Rai Benjamin combined to win America's first and only gold medal for the men's runners on the track. The U.S. closed out action at the stadium with seven golds and 26 overall medals. 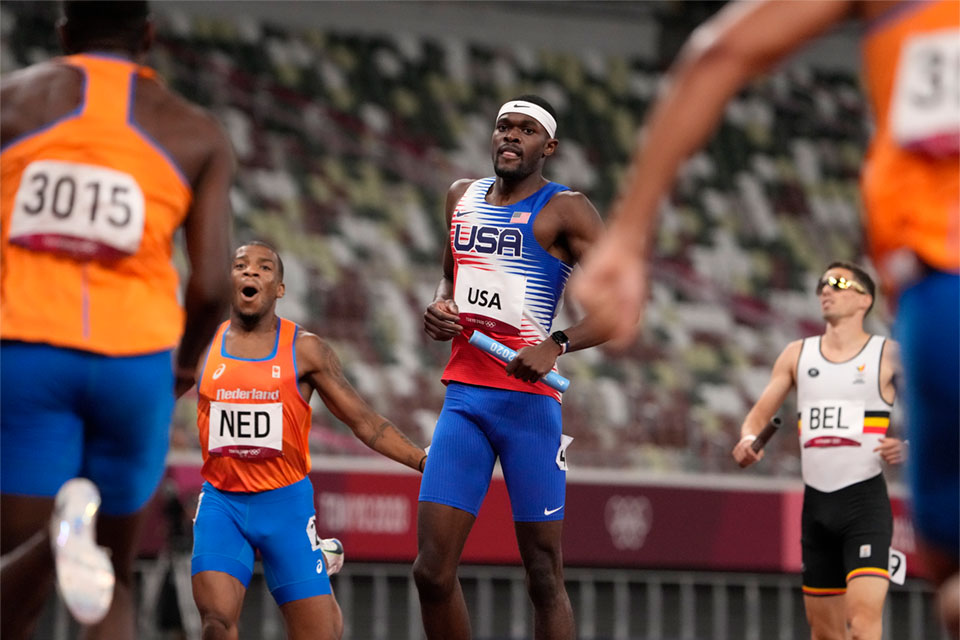 Rai Benjamin, of United States anchors his team to the gold medal in the final of the men's 4 x 400-meter relay at the 2020 Summer Olympics, Saturday, Aug. 7, 2021, in Tokyo, Japan. (AP Photo/Charlie Riedel)

There were other firsts

And Mariya Lasitskene of Russia took the first gold of the Olympic track meet for that team, which was only allowed to bring 10 athletes to track due to sanctions related to the country's long-running doping scandal.

“It has broken a lot of careers,” Lasitskene said. “Partially mine, too.” 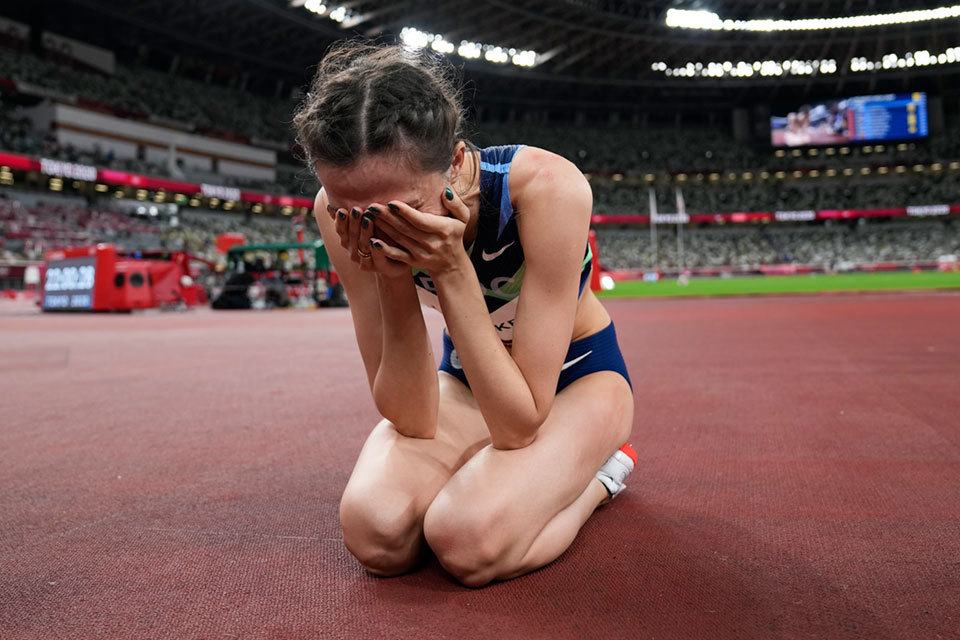 Felix's career was almost derailed by a difficult pregnancy that led to an emergency cesarean section at 32 weeks, which threatened the lives of both her and her baby.

At around that time, she was facing a salary cut from Nike — an insult she felt was too much to ignore.

At that point, Felix, who made her Olympic debut in 2004 as a shy, smiling teenager, became something much different: an outspoken advocate who was no longer simply happy to shut up and run.

Running, though, is what gave her the platform, and so it was fitting that the last platform she stepped on before she exited the Olympic stage was the top step on the medals stand. 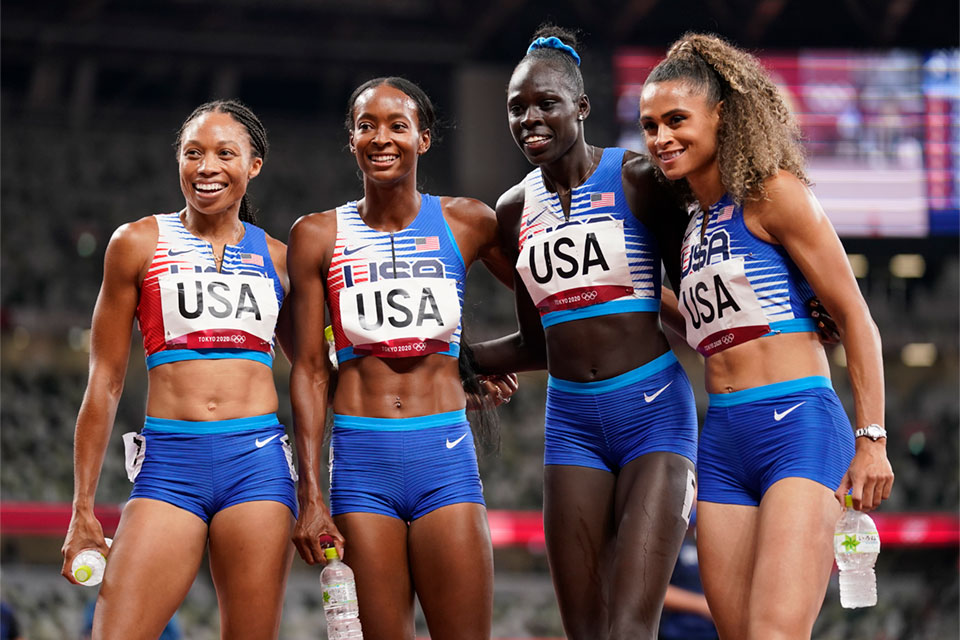 “I feel like I have no regrets,” she said. “I feel like I've given my all to this sport and there's nothing left on this Olympic stage I need to do now.”

Her last pass of the baton was also a passing of the torch, she said, as she nodded to the three women beside her, "and now they're taking this into the future and it's in very good hands.”