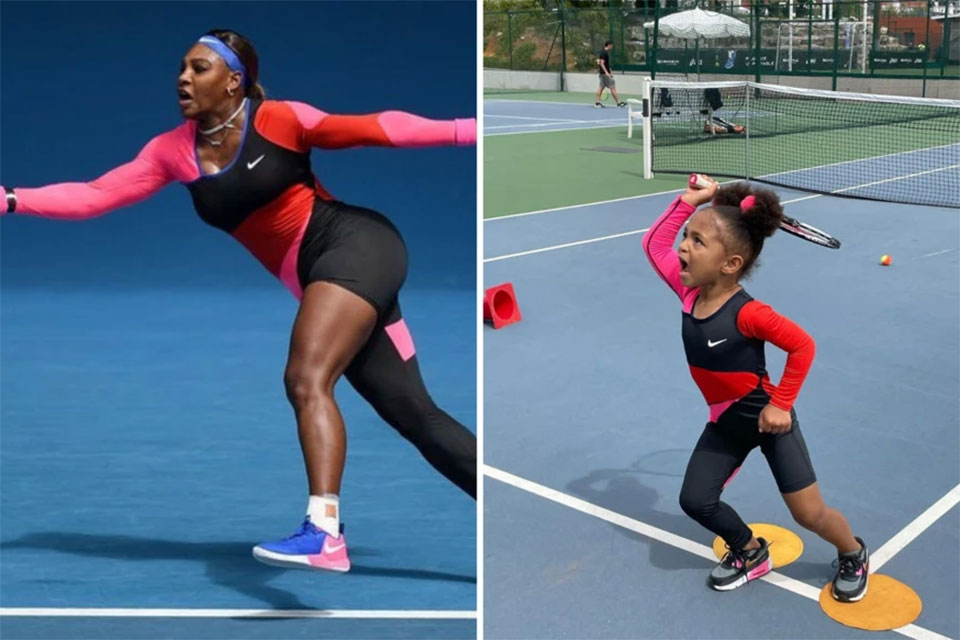 Serena Williams is giving her daughter the game in a series of adorable viral videos, Blavity reports.

Williams said she never planned to allow her daughter to play tennis. If it happened naturally, sure, but it was never in her plans to begin teaching 3-year-old Olympia how to play. And recently, Olympia donned one of her mother's signature looks, melting the internet's heart.

“It’s all-consuming. It’s stressful. It’s a lot of work. It’s a huge commitment, and that might be a little dab of pressure on her...I wouldn’t naturally put her in it, but if that was something that she wanted to do, I would absolutely be like, ‘Oh my gosh, you should totally do that.’ And I’d be rooting for her and supporting her, but it wouldn’t be the first thing that I would do,” Williams previously told reporters.

However, during the pandemic, that all changed. With outside closed and minimal activities for the wee ones to safely social distance and participate in, tennis became the mother-daughter duo’s go-to. Now, Olympia is finally getting the hang of it.

“She’s a perfectionist on the court. I’m not quite sure where she got that from, but yeah, she loves it. I never thought I would let my daughter play tennis, but then during the pandemic, it was the only thing that we could do safely, so I’m like, well, tennis it is,” said Williams.

Now, the 23-time Grand Slam champ recently shared some videos from their sessions, instantly going viral as fans soak up all the goodness in watching the game being passed down from one superstar to the next.

In the first video, Williams begins guiding her daughter through a warm-up as Olympia breaths in deep and keeps up with the stretching routines.

The next video shows the two going through forehand drills, Williams prompting her daughter to pretend the tennis balls are cupcakes, urging her to hit the balls as hard as possible.

The last video shows Williams relaying some advice she received from her father. “You know what Grandpa taught me? First thing you do is turn. Back, reach, hand, follow-through. That’s very complicated for a 3-year-old, but you might get it,” Williams says as she acts out the movement.

Social media hasn’t been able to get enough, sharing the videos far and wide as they witness another budding star in the making. Both Williams and sister Venus learned tennis from their father before they could even walk, residents saying the girls used to hold tennis rackets in their strollers. The two trained at a tennis court in Compton, California, waking up daily as early as 6 am to train before and after school.

Both Williams sisters are widely considered the greatest tennis players of this generation. Knowing that there might be another Williams offspring poised for tennis in the future is a dream come true!