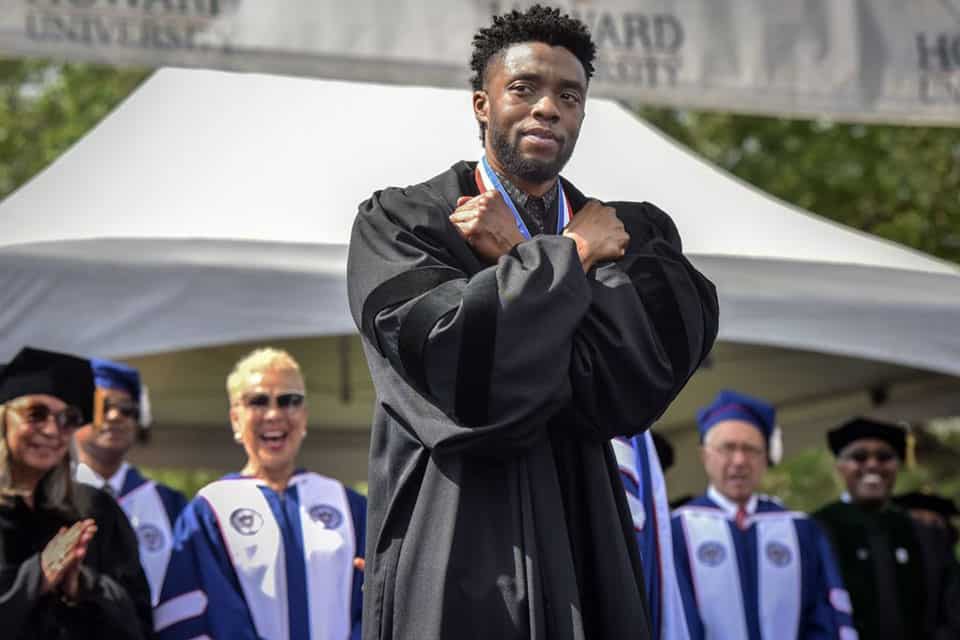 Howard University just announced the renaming of its College of Fine Arts after the late Chadwick Boseman, The Washington Post reports.

In 1997, when Boseman was an undergraduate student at Howard, he spearheaded a protest against the administration after officials decided to consolidate the College of Fine Arts into the larger College of Arts & Sciences. The multi-day protest was just the beginning of Boseman’s passion for the arts and his beloved HU. He would go on to graduate in 2000 with a bachelor of arts degree in directing.

In 2018, he returned to Howard as a commencement speaker, receiving an honorary doctorate and inspiring graduates with stories about his days as a student. At the time, President Wayne A.I. Frederick announced the return of the College of Fine Arts to its independent status, a full-circle moment for Boseman.

Last year, Boseman passed away after a private battle with colon cancer at 43. Posthumously, he has received several honors and recognitions, including an Academy Award nomination for his performance in his last film, “Ma Rainey’s Black Bottom.” Shortly after his passing, students began a petition to rename the fine arts college in his honor. Frederick also wanted to honor Boseman, who had agreed to serve on the board of the fine arts college and was working on a master class series for students. Now, the university has officially announced its plans for the Chadwick A. Boseman College of Fine Arts, with the new state-of-the-art building currently in the development phase.

Walt Disney Co.’s executive chairman, Bob Iger, is working with Howard to lead fundraising efforts for the new building and an endowment in Boseman’s honor. The building will house the fine arts college, the Cathy Hughes School of Communications, the University TV station, WHUT, and the radio station, WHUR 96.3. Iger is committed to ensuring Boseman’s legacy is cemented, developing a friendship with the late actor after the success of “Black Panther.”

“We are very excited. This is the right thing to do. Chadwick’s love for Howard University was sincere, and although he did not live to see those plans through to fruition, it is my honor to ensure his legacy lives on,” Frederick said.

Iger echoed those sentiments, saying, “Through his tremendous example, he inspired millions to overcome adversity, dream big and reach beyond the status quo, and this college named in his honor at his beloved Howard University will provide opportunities for future generations of artists to follow in his footsteps and pursue their dreams.”

Boseman’s parents, Caroline and Leroy Boseman, also issued a statement about the tremendous honor, saying, “[Chadwick] would be overjoyed by this development. His time at Howard University helped shape both the man and the artist that he became, committed to truth, integrity, and a determination to transform the world through the power of storytelling.”

His widow, Simone Ledward-Boseman, shared in the excitement.

The news of the renaming comes on the heels of the announcement of the iconic actress and Howard alumna, Phylicia Rashad, being named as dean of the College of Fine Arts. When Boseman was a student, Rashad mentored him, helping secure funding for him to attend a summer acting program at Oxford University.

“Unrelenting in his pursuit of excellence, Chadwick was possessed with a passion for inquiry and a determination to tell stories, through acting, writing, and directing, that revealed the beauty and complexity of our human spirit,” said Rashad.

Frederick says the pandemic is the only roadblock to breaking ground on the new building but affirms that the University is “moving with haste.” The new building will be located directly behind the current building College of Fine Arts.