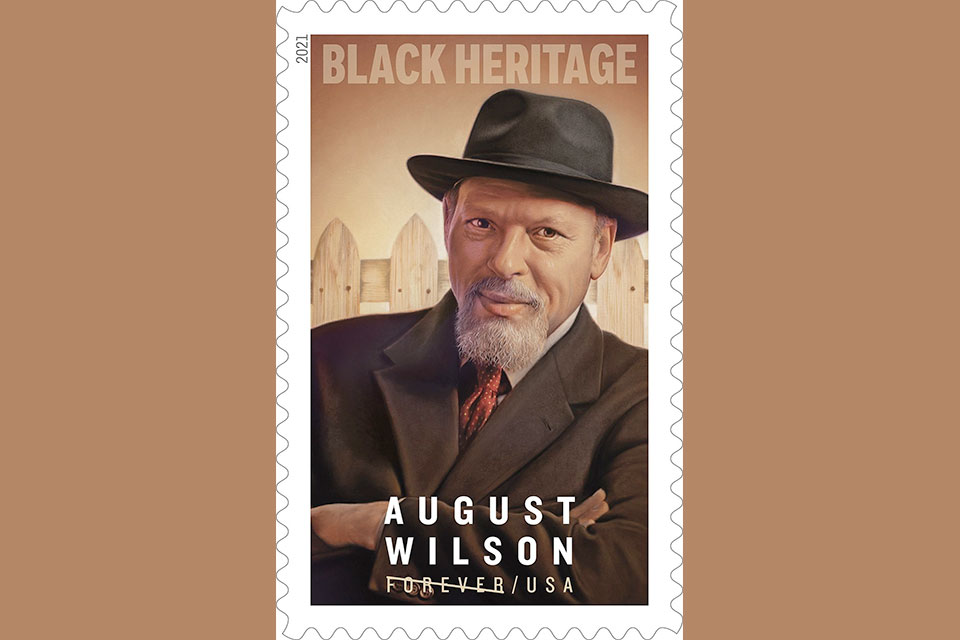 WASHINGTON, Jan. 28, 2021 /PRNewswire/ -- The U.S. Postal Service issued the August Wilson Black Heritage stamp today. This Forever stamp was dedicated during a virtual ceremony and is now being sold at Post Office locations nationwide and online at usps.com/wilsonstamp.

"Wilson is hailed as a trailblazer who brought fresh perspectives and previously unheard voices to the stage."

Colin was joined for the ceremony by Constanza Romero, trustee of the August Wilson Trust and widow of August Wilson; Sakina Ansari, daughter of August Wilson; Phylicia Rashad, actor, director; and Stephen McKinley Henderson, actor and associate artistic director for the audio recordings of August Wilson's American Century Cycle. The virtual ceremony also included photos from the August Wilson Archive courtesy of the University of Pittsburgh and a video tribute featuring actor Viola Davis. The ceremony can be viewed on the Postal Service Facebook and Twitter pages.

"August Wilson was a literary master. He understood the inherent power of language," said Rashad. "I am overjoyed that the Postal Service has selected this inspired playwright as its 44th honoree in the coveted Black Heritage stamp series."

One of America's greatest playwrights, Wilson is hailed as a trailblazer for helping to bring nonmusical African American drama to the forefront of American theater.

August Wilson was born Frederick August Kittel in Pittsburgh, PA, on April 27, 1945. After dropping out of high school, he became a voracious reader at the local library, served in the Army for a year, and worked a variety of jobs. In 1965, the year he took the surname of his African American mother, he discovered the blues, which inspired a lifelong fascination with the importance of music and oral tradition in African American culture. Energized by the Black Power movement, he helped found a theater company in 1968 in Pittsburgh's Hill District, his childhood neighborhood. In the late 1970s, Wilson moved to St. Paul, MN, where he worked for a science museum, honing his scriptwriting skills by adapting Native American stories into plays for children.

Between 1982 and 2005, Wilson focused on writing his acclaimed American Century Cycle. This series of 10 plays includes nine set in Pittsburgh's Hill District, with one play for each decade of the 20th century. Loosely connected through a few characters who appear at different stages of their lives, the American Century Cycle plays have been praised for being emotionally powerful but not sentimental, and for demonstrating Wilson's ear for African American storytelling traditions. All 10 plays have been produced on Broadway, and several have returned to the Broadway stage for critically successful revivals.

The only play in the American Century Cycle not set in Pittsburgh, "Ma Rainey's Black Bottom" chronicles a tense 1927 recording session in Chicago that reveals truths about the exploitation of African American musicians and the tenuous nature of African American success. Noted for its statement about the blues as a way of understanding African American life, the play debuted at the Yale Repertory Theatre in 1984; Wilson typically debuted his plays with regional theater companies before honing them for the Broadway stage. "Ma Rainey's Black Bottom" opened on Broadway later the same year. Several awards and nominations marked the Broadway production as a turning point for Wilson's career, including a New York Drama Critics' Circle Award for Best American Play and a Tony Award nomination for Best Play, and the original Broadway cast recording won a Grammy for Best Spoken Word or Non-Musical Recording. The film adaptation of the play was released on Netflix last month.

With lyrical language and the emotional power of the blues as staples of his work, Wilson collected innumerable accolades, including seven New York Drama Critics' Circle Awards; a Tony Award for 1987's "Fences"; and two Pulitzer Prizes for "Fences" and 1990's "The Piano Lesson."

A pictorial postmark of the designated first-day-of-issue city, Pittsburgh, PA, is available at usps.com/shopstamps.