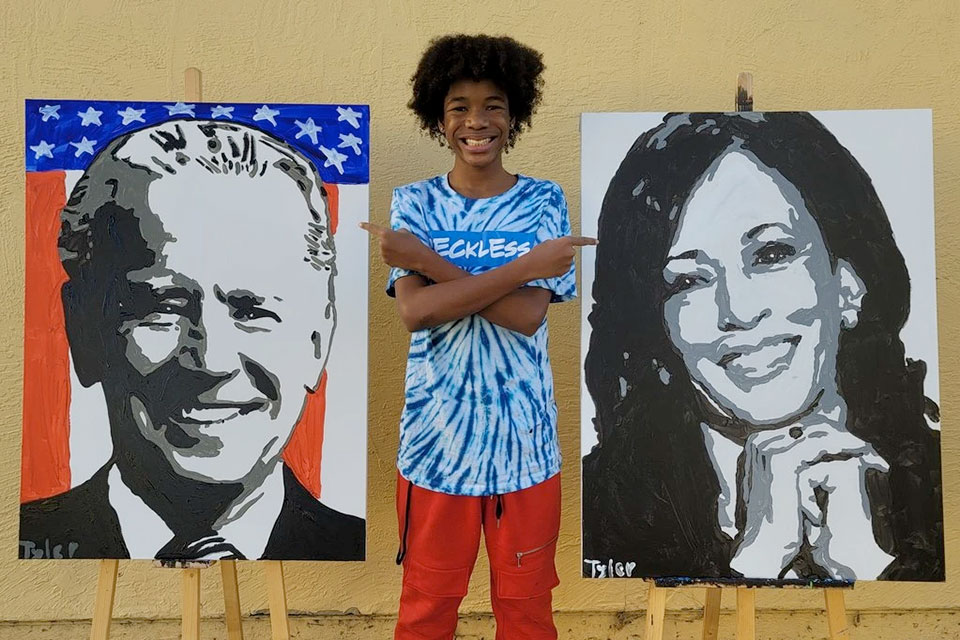 14-year-old Tyler Gordon went viral last Sunday after sharing a timelapse video of himself painting a portrait of Vice President-elect Kamala Harris. Last week she surprised him with a phone call to express her amazement.

"I'm overwhelmed with just the magnificence of your artistry," Harris told Gordon. "You really have a gift, my goodness. I was so touched to see it."

The self-taught artist said it took about 51 minutes to complete. When he was finished, he showed the final product, with the Golden Gate Bridge in the background, and asked his Twitter followers to help Harris see it.

@KamalaHarris My name is Tyler Gordon and I'm 14 years old and I live in the Bay Area! I painted this picture of you and I hope you like it!!! Please Rt and tag her so that she can see this. Please!!!@JoeBiden @DouglasEmhoff @SenKamalaHarris @WeGotGame2 pic.twitter.com/X0qtChKBf2

"I painted this picture of you, and I hope you like it!!! Please Rt and tag her so that she can see this," he tweeted.

Twitter got to work, and Gordon's portrait made its way to Chelsea Clinton on Twitter. She tagged Harris, telling her to check out his "beautiful portrait." Harris told Gordon that when she makes it back to Oakland, she wants to meet him.

"It means so much to me," she said. "And for you to be my homeboy and to do that kind of thing, it really touches me."

Gordon describes himself on Twitter as partially deaf with a stutter and a vitamin D deficiency, "BUT I am also a 14 yo artist that seeks to inspire through the stories of heroes in my work." He decided to honor President-elect Joe Biden with a portrait as well, noting how he’s learned from his ability to overcome the speech impediment.

This isn’t the first time Gordon’s work has caught the attention of one of his muses. He has also been recognized by Janet Jackson and went viral last year after painting the Exonerated 5 on a book bag.

Gordon says he wants to inspire people and we think he's accomplished his goal!

This story was originally published on Because of Them We Can.