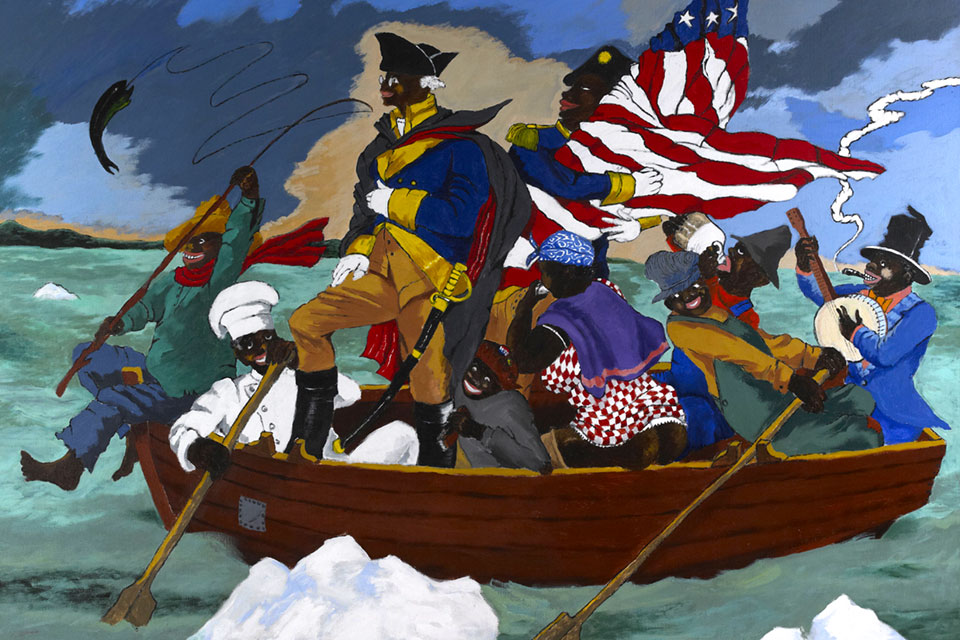 Colescott began his career teaching at Portland State in 1957 after graduating from Berkeley. His work caught the eye of Arlene Schnitzer, who first showed it at her Fountain Gallery in 1961. The two became lifelong friends, and the exhibit was made possible in part by a $10 million gift Schnitzer recently gave to the art museum: Art and Race Matters: The Career of Robert Colescott.

Colescott was well-known--and often criticized--for exploring race relations with aggressive imagery, rendering Aunt Jemima’s face on more than one occasion and switching the races of an entertainer widely known as Bojangles and a famous child star in his painting “Shirley Temple Black and Bill Robinson White.”

“Every culture has a kind of stereotypical imagery that somehow places somebody in the position of being other, or exposes some aspect of society that they think is ridiculous or to be laughed at,” art historian Lowery Stokes Sims, who acted as a guest curator for the retrospective, told The Skanner.

“Unfortunately, Black imagery was used so virulently as a kind of weapon against Black advancement.

"That’s where the troubles come in.”

But while Colescott engaged with the pop art movement, he was well versed in what were then known as the great masters of his field.

“For those of you who have studied art history, Robert Colescott takes art history, makes us think deeply about it, makes us problematize art history, and then tosses it around and beats us around the head a little bit,” Ferriso said in introducing the more than 70-piece exhibit. 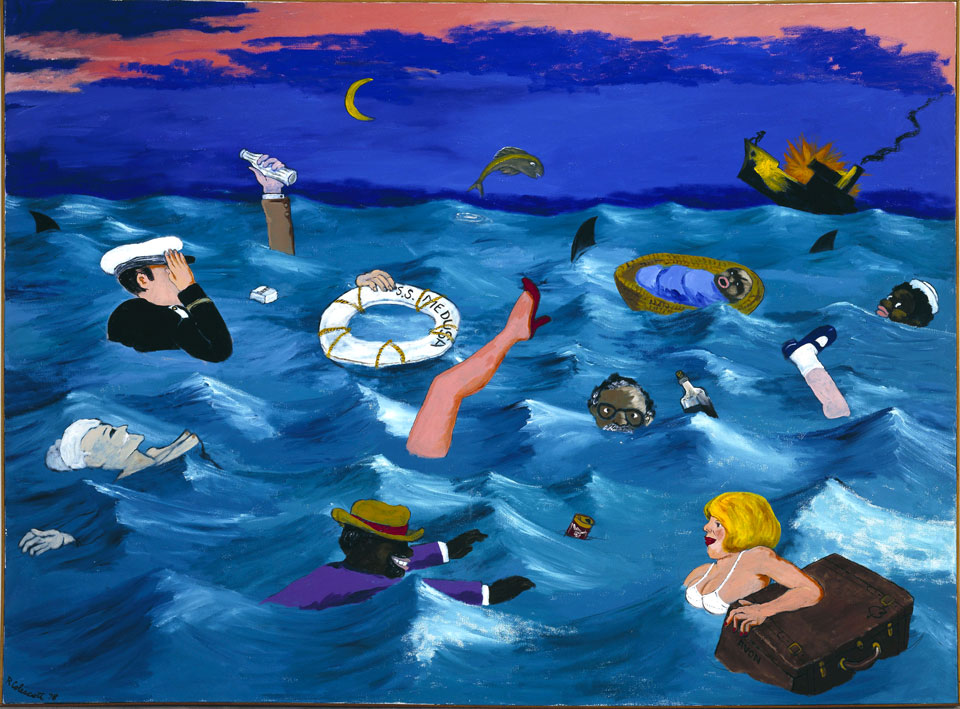 Painter Robert Colescott's "The Wreckage of the Medusa" (1978) demonstrates the artist's interest in imitating earlier works, often with a playful or sarcastic edge. (courtesy Portland Art Museum)“He always said he painted in the grand traditions, of history paintings with mythology and history subjects,” Sims said. “And the scale of his paintings really carries that over.”

This exhibit alone features his re-imagining of work by Manet, Picasso, Théodore Géricault, and Emanuel Leutze, whose “Washington Crossing the Delaware” is spoofed with Colescott’s “George Washington Carver Crossing the Delaware.” His controversial 1975 “Eat Dem Taters” is a play on van Gogh’s “Potato Eaters,” recasting Dutch peasants as Black caricatures.

“Bob, when he came into the 70s, was doing two things: He was trying to blacken art history by switching--code-switching--the races,” Sims said, “but he was also doing daily, sort of workaday at the office or at the home kinds of situations that very much reflected what was going on. If you look at those paintings, you sort of realize how much he’s indebted to R. Crumb.” 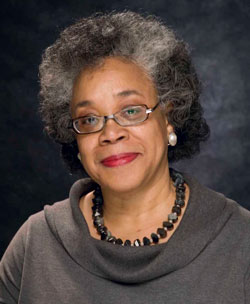 Art historian Lowery Stokes Sims was a guest co-curator for the Robert Colescott exhibit. She has spent more than 40 years studying his work.Sims was the first--and, until last year, she points out, only--Black curator at New York’s Metropolitan Museum of Art. She has studied Colescott’s work for more than 40 years, and says that his often playful engagement with art history did not initially endear him to the more traditional art world.

“He wasn’t politically correct,” Sims said. “But for me, it struck a kind of note of freedom that I didn’t have to conform. I’m of the generation of coming of age in the 60s and 70s. So you’re breaking away from your middle-class parents, and traditional values of assimilation, and exposing yourself to the women’s movement, the Black Power movement. Each place had its own set of rules and ethics that were very fixed.”

The first time she saw Colescott’s work, she said, “I was just blown away because it sort of helped me know that there was a kind of way that you could sort of entertain transgression. And transgression didn’t necessarily have to be something that was overt. Sometimes it’s covert. There is a group of particularly women friends of mine and we all worked in establishment institutions, and we transgressed everytime we could to sneak something in, to get our agenda done, that was different or ignored by the institutions.”

For Sims, that meant finally getting Colescott shown at the Met. It took her nearly seven years of pitching his work before he got any wallspace.

“Sometimes there was a strong rejection of his appropriations,” Sims said.

It was a different series, with an equally strong eye on history, that finally got Colescott shown at the Met in the late ‘80s. His “Knowledge of the Past is the Key to the Future” battles the erasure of Black contributions and suffering in key events. Currently on display at the Portland Art Museum is "Matthew Henson and the Quest for the North Pole,” about the African American explorer who spent a total of nearly two decades on expeditions to the Arctic, but who is often overshadowed by his White colleague Robert Peary.

“In this series, (Colescott) really began to look at the impact of history, from the neglect of Matthew Henson to what really happened when Columbus came, in these crammed compositions that bring in all the people,” Sims said.

Sims admits that it can be a challenge to reconcile Colescott’s attitudes toward women with more modern sensibilities. Female subjects in much of his work are buxom, and at times appear to simply serve the male gaze. 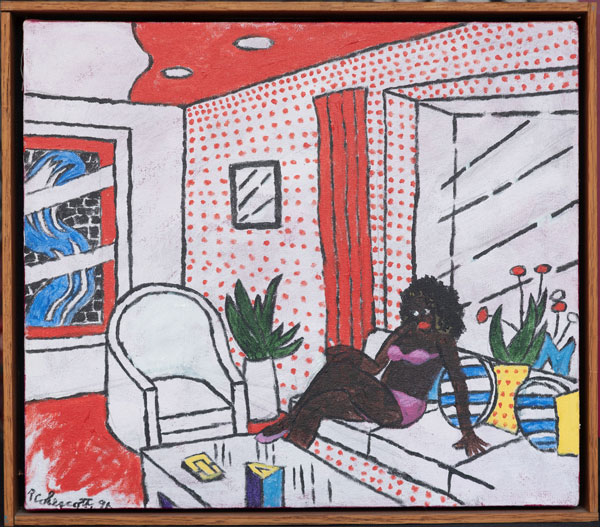 Robert Colescotts "Interior II – Homage to Roy Lichtenstein" (1991) shows the painter's interest in art history and Black representation. (courtesy Portland Art Museum)“Whether or not they reflect his attitudes specifically, I don’t know. Bob was a man who enjoyed life,” Sims said. “I think the interesting thing when you have certain kinds of subject matter, racially and gender-wise, is that you have to be careful of the specificity of the time that it’s produced in. Sometimes today we conflate them, because we come at them with our own attitudes. That’s not to make excuses, but it’s to sort of have a comprehension of where they come from, and to understand what the artist was trying to do at the time.”

Photography from Colescott’s collaboration with artist Carrie Mae Weems offers a more recent conversation on sexuality and power dynamics between an artist and his model, and provides a balance to the often cartoonish depictions of American beauty standards.

“The exhibit feels quite conversational,” Kook-Anderson said, calling it a “loose chronology of Colescott’s career.”

Kook-Anderson pointed out that Colescott, who died in 2009, was determinedly painting into his 80s, even as he coped with Parkinson’s disease. In pieces on display toward the exhibit’s end, skin tones become more muddled and harder to decipher, she said, as his work becomes “more political, less tongue-in-cheek.”

Art and Race Matters: The Career of Robert Colescott is on display at the Portland Art Museum through May 17. It was organized by the Contemporary Arts Center in Cincinnati. Sims co-curated the exhibit with Matthew Weseley.