With 'Megxit,' Harry and Meghan Aim to Control Media Image 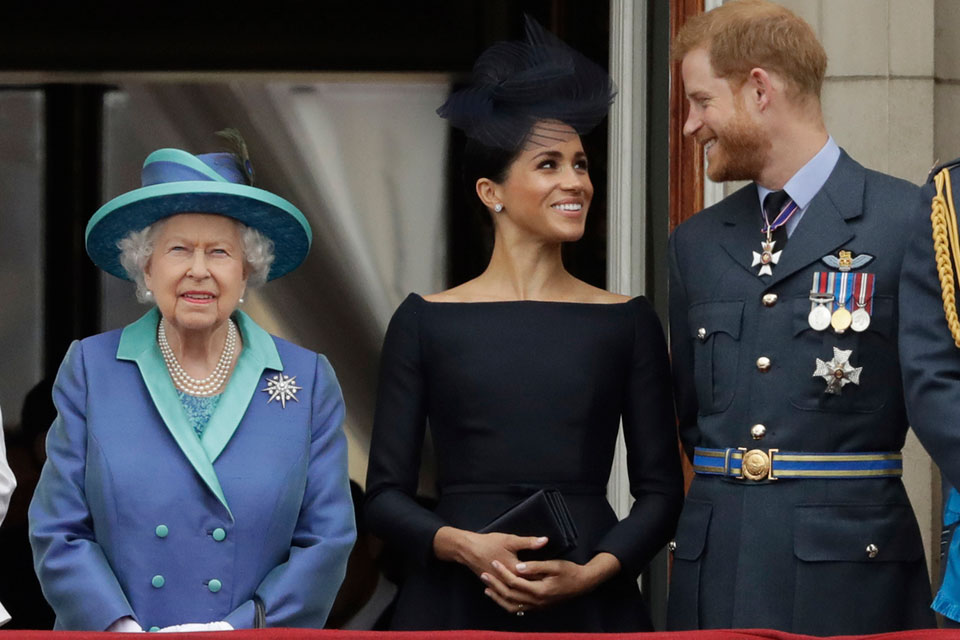 The relationship between Britain's royals and the media is awkward, mistrustful — and seemingly inescapable. But now Meghan and Harry want out.

After years of growing tension with the press, the prince and his wife have announced plans to quit their senior royal duties, move part-time to North America, seek financial independence and withdraw from regular media scrutiny.

The couple — who have complained of intrusive media coverage and accused some British media commentators of racism — slammed the country's long-standing arrangements for royal media coverage, saying they prefer to communicate directly with the public through social media.

The British press was stung by the snub, reacting Thursday with articles, columns and editorials that ranged from disappointment to fury. 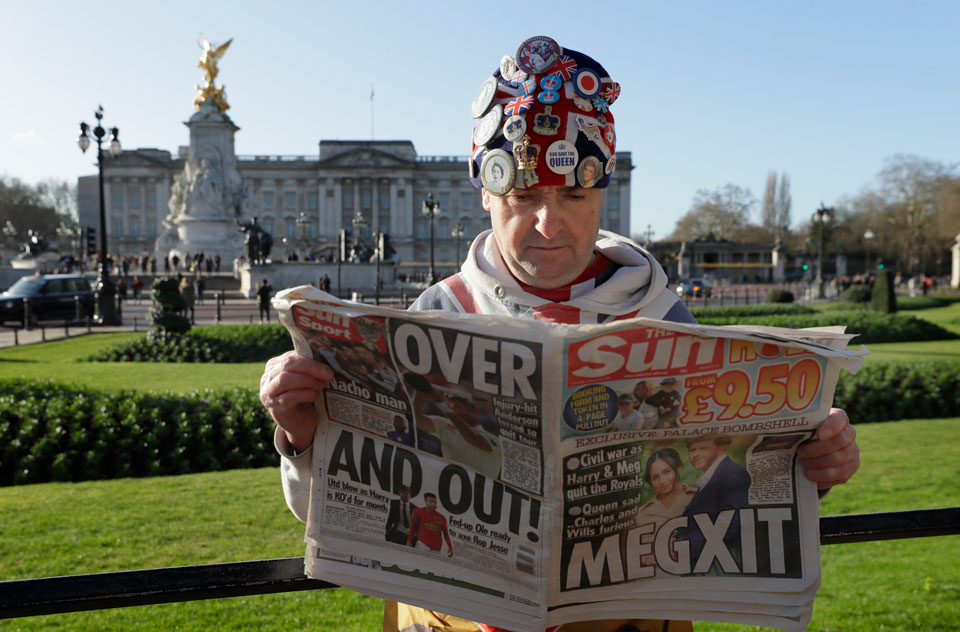 Self-proclaimed royal super-fan John Loughrey poses for the media backdropped by Buckingham Palace in London, Thursday, Jan. 9, 2020. In a statement Prince Harry and his wife, Meghan, said they are planning "to step back" as senior members of the royal family and "work to become financially independent."(AP Photo/Kirsty Wigglesworth)The Daily Mirror said in an editorial that the couple's failure to tell Harry's grandmother Queen Elizabeth II about their plans "shows shocking disregard for a woman whose entire life has been ruled by a sense of public duty and honor." The Times of London accused Harry of "petulance and hot-headedness," while the Daily Mail said the couple wanted "the status of being 'senior' royals but the privacy and freedom of being private citizens."

The Sun and the New York Post both described the departure as "Megxit," a play on Brexit, Britain's impending departure from the European Union.

The 93-year-old monarch moved Thursday to take control of the situation. Britain's national news agency, Press Association, reported that the queen had ordered officials representing the monarch, Charles, Prince William, and Harry and Meghan to meet and find "workable solutions" within "days not weeks."

Harry and Meghan's shock announcement drew comparisons to the abdication of the queen's uncle King Edward VIII, who gave up the throne in 1936 so he could marry divorced American Wallis Simpson. Once again, waspish commentators noted, an American woman has caused a ruction in the British royal family.

But the relationship between royals and the media has changed dramatically in the intervening decades. Before the abdication, the romance between Edward and Simpson was headline news in the United States but went largely unreported by a deferential British press.

The trauma of World War II and the social revolution of the 1960's demolished that tradition of deference to royalty. For decades, the U.K. media has proclaimed its reverence for the queen while treating the travails of her family as fair game, from the divorces of three of her four children to second son Prince Andrew's troubling friendship with the late sex offender Jeffrey Epstein.

Princess Diana and the media

After Prince Charles married Lady Diana Spencer in 1981, the media charted every twist in the marriage: the births of sons William and Harry, Diana's glamour and charity work, the slow public crumbling of the relationship.

Charles and Diana both used the media as a weapon as their marriage foundered, giving TV interviews to present themselves in a sympathetic light. But Diana — a global megastar, followed by paparazzi wherever she went — was never fully in control of the media attention. She was killed in a car crash in Paris in 1997 while being pursued by photographers.

Diana's death provoked a crisis for the monarchy — which was portrayed as remote and cold at a time of national grief — and for the media, accused of hounding a vulnerable woman.
In the wake of Diana's death, the palace and the press reached an uneasy truce. The British media left young William and Harry alone in exchange for carefully staged interviews and photo opportunities as they grew up. That practice has continued with the three young children of William and his wife Kate.

Prince Harry and the media

Harry, however, still blames the media for his mother's death, and since meeting his wife — the former actress Meghan Markle — he has become less willing to play the game.

In 2017, the prince accused the media of directing "a wave of abuse and harassment" at the biracial Markle, including "racial undertones" in articles. Last year the couple launched a lawsuit against the Mail on Sunday newspaper over its publication of a letter written by Meghan. Harry said he feared "history repeating itself. … I lost my mother and now I watch my wife falling victim to the same powerful forces."

Yet using the media has been a key part of Harry and Meghan's strategy, just as it was for Diana. When they wanted to make their unhappiness public, the couple gave an interview to a sympathetic journalist from broadcaster ITV.

In that interview, Meghan said that "very naively," she had been unprepared for the intense media scrutiny she would receive once she married into the British royal family.

"I never thought that this would be easy, but I thought it would be fair," she said.

Harry and Meghan now want to use the media on their own terms, dropping out of the "royal rota," a pool system that organizes media coverage of the royal family's public events. On a newly launched website, they said the system hampered their ability to "personally share moments in their lives directly with members of the public" via social media.

They said in the future they would "engage with grassroots media organizations and young, up-and-coming journalists." They also slammed the "misconception" that the British media's royal correspondents were "credible sources" of information.

Freddy Mayhew, editor of the Press Gazette, a newspaper industry trade publication, said the royal couple was aiming for a "much more controlled, much more private" approach to the media, drawing on Meghan's experience as a U.S. television star.

"I think they are perhaps seizing an opportunity with the decline of print media to break away," he said. "That's something they couldn't have done before, when papers were at their full strength.

"But now that a lot of it is moving online, there's the ability for people like Harry and Meghan to take control of what they put out there."

Harry, 35, is Elizabeth's grandson and sixth in line to the British throne, behind his father, brother and his brother's three children. With his ginger hair and beard, he is one of the royal family's most recognizable and popular members and has spent his entire life in the public eye.

Before marrying the prince in a wedding watched around the world in 2018, the 38-year-old Meghan was a star of the TV legal drama "Suits." The couple's son Archie was born in May 2019.

Surprise statement from Harry and Meghan

Less than two years after that fairy tale wedding, the couple was enmeshed in an uproar that began Wednesday with a statement from Buckingham Palace, described as "a personal message from the Duke and Duchess of Sussex." It said Harry and Meghan intend to become financially independent and to "balance" their time between the U.K. and North America.

In a subsequent statement just 90 minutes later, though, a difference of opinion was laid bare. The palace said many issues still had to be worked out before the couple's plan could be realized and discussions with the couple "were at an early stage."

That communique suggested that Harry and Meghan's statement had caught the royal household by surprise.

"We understand their desire to take a different approach, but these are complicated issues that will take time to work through,'' it read.

The announcement left a slew of questions: Where exactly do Meghan and Harry plan to live, and how will they earn private income without tarnishing the royal image? At the moment, they are largely funded by Harry's father, Prince Charles, through income from his vast Duchy of Cornwall estate.

The move dominated the news in Britain, and divided opinion. Some blamed Meghan for the troubles. A social media storm compared her to Yoko Ono, the widow of Beatles singer John Lennon, who was blamed for the breakup of the famous band.

Madame Tussauds, the famed London waxwork attraction, moved the couple out of the royal section, where they had previously stood next to the monarch and Prince Philip.

Others offered sympathy for the queen, who remains a revered figure.

"We don't mind them having an ordinary life. What we don't like is the queen not being informed about nothing," said royal super-fan John Loughrey, adding that the British public did not want to see the royal couple "isolated" abroad.