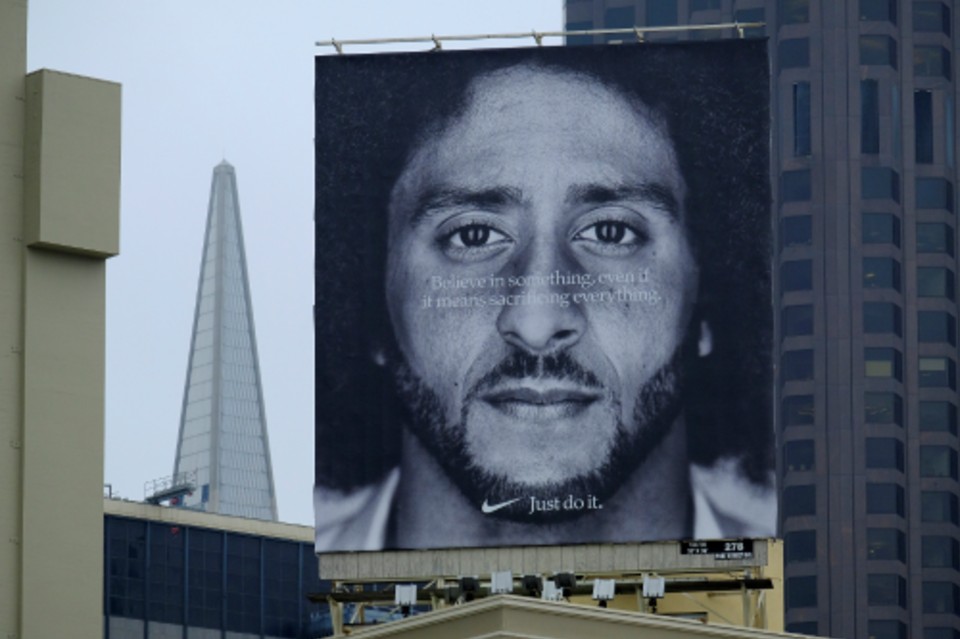 NEW YORK (AP) — Nike's sales have only grown since it seized attention with its ad campaign featuring former NFL quarterback Colin Kaepernick. So, the shoemaker deferred to its star endorser when he raised concerns over a sneaker featuring an early American flag. 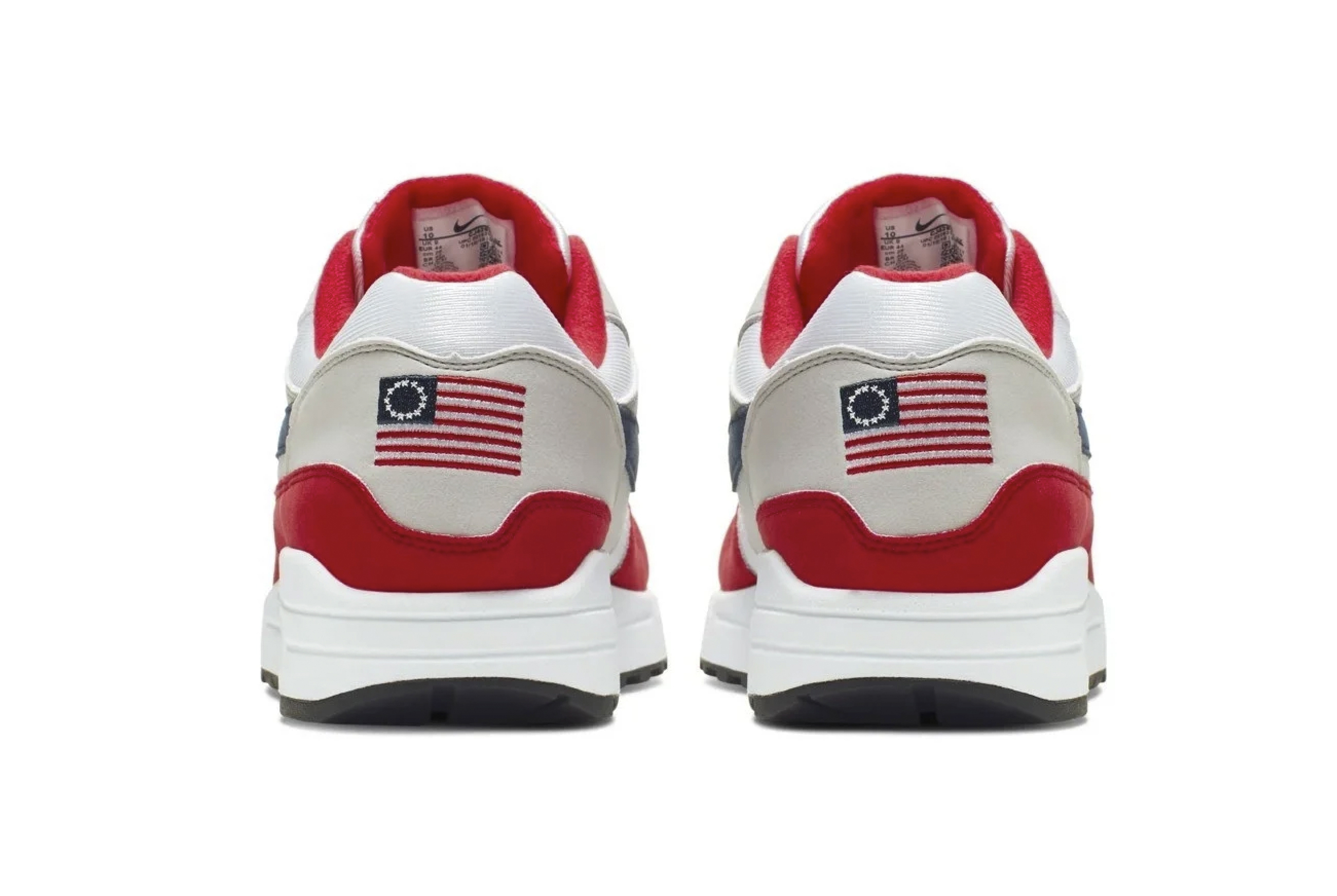 This product image shows Nike Air Max 1 Quick Strike Fourth of July shoes that have a U.S. flag with 13 white stars in a circle, known as the Betsy Ross flag, on them. Nike is pulling the flag-themed tennis shoe after former NFL quarterback Colin Kaepernick complained to the shoemaker, according to the Wall Street Journal. (AP Photo)Nike pulled the Air Max 1 USA shoe, which included a Revolutionary-era U.S. flag with 13 white stars in a circle on the heel, after Kaepernick told the company he and others found the flag offensive because of its connection to an era of slavery, according to the Wall Street Journal. The shoe had been sent to retailers to go on sale this week for the July Fourth holiday, according to the Journal.

The decision caused an instant backlash among conservatives who accused Nike of denigrating U.S. history, with Arizona Governor Doug Ducey tweeting that he is asking the state's Commerce Authority to withdraw financial incentives promised to Nike to build a plant in the state.

Others expressed surprise that the symbol known as the "Betsy Ross" flag, so named after the beloved Philadelphia woman credited with designing it, could be considered offensive. Although some extremist groups appear to have appropriated the flag, it is not widely viewed as a symbol of hate, and is used in museums that focus on 18th century U.S. history.

The Anti-Defamation League does not include it in its database of hate symbols. Mark Pitcavage, a senior research fellow for the ADL's Center on Extremism, said extremist groups have occasionally used it, but the flag is most commonly used by people for patriotic purposes.

We view it as essentially an innocuous historical flag,

"We view it as essentially an innocuous historical flag," Pitcavage said. "It's not a thing in the white supremacist movement."

Nike said in statement that "it pulled the shoe based on concerns that it could unintentionally offend and detract from the nation's patriotic holiday." The company pushed back against criticism that the decision was being "anti-American."

"Nike is a company proud of its American heritage and our continuing engagement supporting thousands of American athletes including the U.S. Olympic team and U.S. Soccer teams," Nike said.

Nike, Kaepernick "Just Do It" Campaign

Nike is showing consistency by listening to Kaepernick, the star of the brand's "Just Do It" campaign last year that ultimately proved a win for the company, said Chris Allieri, founder of New York public relations firm Mulberry & Astor.

"Listening to somebody that has helped brands in so many countless ways, it makes sense. It would be completely hypocritical for them not to listen to him," Allieri said.

Kaepernick was the first NFL athlete to take a knee during the national anthem to protest police brutality. Some people called for boycotts after Nike featured him in a campaign last year that included a print ad featuring a close-up of his face and the words, "Believe in something. Even if it means sacrificing everything."

Nike's annual sales have jumped 7% to more than $39 billion, according to the company's last quarterly report. Its stock is up 12% since the start of the year. And Nike CEO Mark Parker has said the Kaepernick campaign inspired "record engagement with the brand," an important goal for a company trying to strengthen its direct-to-consumer business.

Because the Betsy Ross flag is not widely considered a racist image, it's difficult to judge whether Nike should have designed the shoe in the first place.

Can a brand be expected to know everything possible that could be offensive?

"Can a brand be expected to know everything possible that could be offensive? That's probably tough, but that's why you have to have inclusive teams," Allieri said.

While some took to Twitter to thank Nike and Kaepernick for yanking the sneaker, several Republican politicians were quick to condemn the company.

"If we are in a political environment where the American flag has become controversial to Americans, I think we have a problem," said Sen. Mitch McConnell.

Ducey ordered Arizona to withdraw a grant of up to $1 million that was slated for Nike, said Susan Marie, executive vice president of the Arizona Commerce Authority, which administers the grant. But the governor has no authority over more than $2 million in tax breaks over five years that were approved Monday by the City Council in the Phoenix suburb of Goodyear, where Nike committed to opening a $185 million factory that would employ more than 500 people.

"I'm sure there are plenty of states out there that would love to have a Nike factory that would employ 500 people," Powell said. "Today's consumers really want brands to be vocal on social issues, especially the younger consumers. This very much aligns with the social position of their core consumers."

The abandoned shoe sparked a discussion on social media and beyond about the Betsy Ross flag itself.

In 2016, a Michigan chapter of the NAACP said the flag has been "appropriated by the so-called 'Patriot Movement' and other militia groups who are responding to America's increasing diversity with opposition and racial supremacy."

The statement came in response to a high school football event where the NAACP said some white students used the flag while attempting to intimidate players from a predominantly black school.

The Anti-Defamation League says "Patriot movement" describes groups that include militias and others who have adopted anti-government conspiracy theories. The ADL says there is some overlap between the "Patriot" movement and the white supremacist movement, but that overlap has shrunk over time.

Lisa Moulder, director of the Betsy Ross House in Philadephia, said she has never heard of the flag being used as a hate symbol.

"Personally, I've always seen it as a representation of early America," Moulder said. "The young nation was not perfect, and it is still not perfect."