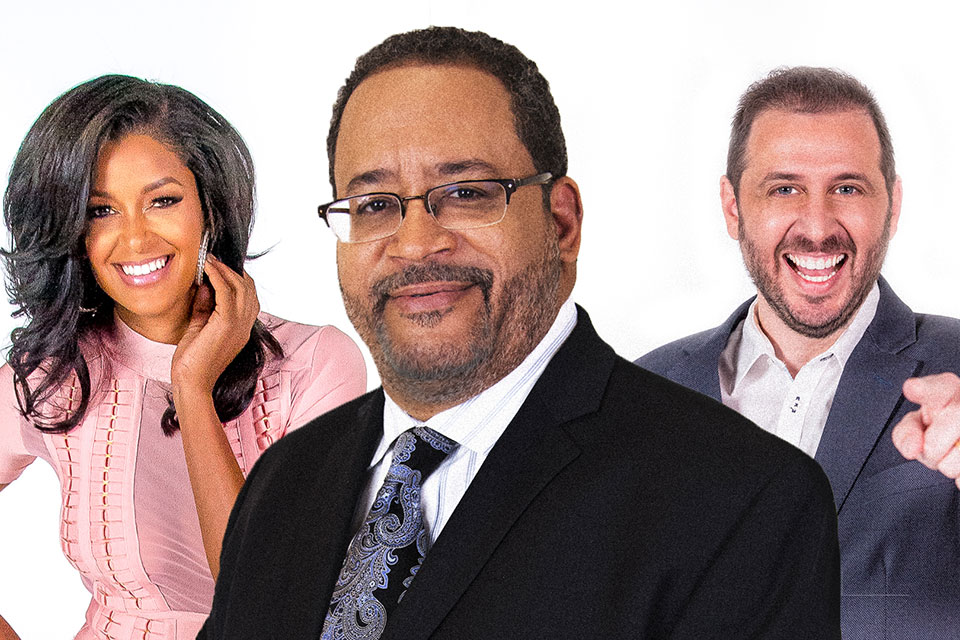 Born and raised in Detroit, Michael Eric Dyson is a writer, sociologist and ordained Baptist minister. Known for his passion and a moral urgency in and out of the pulpit, Dr. Dyson has had a profound influence on American culture.

Dyson teaches Sociology at Georgetown University, writes op-eds for The New York Times; appears on MSNBC as a political analyst; serves as a contributing editor at The New Republic; and hosts of the Michael Eric Dyson Podcast featuring Dr. Dan Ratner.

Among many honors, Dr. Dyson has won a couple of NAACP Image Awards for Outstanding Literary Work in Non-Fiction and the 2007 American Book Award for "Come Hell or High Water: Hurricane Katrina and the Color of Disaster." Named one of the 40 most inspiring African-Americans by Ebony magazine, he also landed on Ebony magazine's annual list of the 100 Most Influential Black Americans.

Besides lecturing at colleges, he's known for his thought-provoking, motivational speeches delivered at union halls, prisons, classrooms and churches across the country. Here, the loquacious luminary discusses his new TV talk show, "The Raw Word," as well as his latest book, "Tears We Cannot Stop."

Kam Williams: Hi Dr. Dyson. I'm honored to have this opportunity to speak with you.

KW: I know you got your master's and doctorate in Princeton, which is where I live. How did you enjoy the time you spent here?

MED: It was one of the most wonderful times I had in the academy. I went there straight from Carson-Newman college. Even though Princeton was considered the southernmost Ivy League school, I found it delightful and made the most of an opportunity to attain a world-class education.

KW: Yeah, Princeton has a shameful legacy in terms of slavery. Most of its students came from the South, and many brought servants with them to school. What interested you in The Raw Word?

MED: An opportunity to launch into daytime talk, and to bring both gravity and humor to bear upon subjects people across the country are interested in, from lighthearted topics like what's in your belly or in your car, to what motivates us as a nation to act and behave in the ways we do. I look forward to weighing-in on all that stuff.

KW: How did you come to be paired with Claudia Jordan and Dr. Dan Ratner as co-hosts?

MED: Through our executive producer, Andre Jetmir. He worked his magic behind the scenes, bringing us all together.

MED: Well, you've got Dyson... you've got Ratner... and you've got Jordan. Each of us brings a significant following and some impressive credentials from our spheres of influence to this endeavor, Dan as a therapist, Claudia as an actress, talk show host and reality-TV star, and I've been a writer, professor and public intellectual for awhile. So, we offer a unique mix of gifts that I hope will appeal to members of the audience.

KW: Editor/Legist Patricia Turnier says: I am impressed by your ability to write numerous excellent books. Most authors are not capable of following up a great opus with another best seller. What advice do you have for aspiring authors about consistently writing compelling, informative books?

MED: First, you definitely want to only take on projects you feel passionately about. Second, you want to conduct significant research on each subject. And third, you want your writing to be eloquent and reflect serious scholarship. The best writers are re-writers. So, stay at it, keep on top of your game, and continue to be curious about the world.

KW: Patricia would also like to hear your opinion of this quote from James Baldwin: “It is only in his music, which Americans are able to admire because a protective sentimentality limits their understanding of it, that the Negro in America has been able to tell his story.”

MED: He often talked about how music was where black people were able to be most honest and tell as much truth as the world could bear. At that level, they were eye-to-eye with truths that needed to be explored. He was giving love to jazz and the blues because he felt that they were simpatico with his ambition as a writer to tap the same wellspring of emotions, intelligence and reflection.

America has an obsession with the gun and an almost worshipful belief in the 2nd Amendment.

KW: I assume that mass killings will be a topic of discussion on the show. What do you see as the solution to the problem?

MED: We've already discussed this issue on the show, and we will discuss it again. The president meeting with the makers of video games isn't going to solve the problem. There are so many other societies that aren't filled with gun-owning citizens. America has an obsession with the gun and an almost worshipful belief in the 2nd Amendment. We should continue to push back against those who would defend the NRA, and we have to stand with those young people saying "Enough is enough!" Much have the change in this nation has been spearheaded by young people, like the Freedom Riders on the front lines of the Civil Rights Movement, and the Black Lives Matter Movement which doesn't get enough credit today. So, I stand on the side of the kids and the vulnerable people who say, "Let's have some common sense reform of gun laws."

KW: Do you think gun violence in cities like Chicago will be reduced by such measures?

MED: If there are fewer guns across the country, that's a helluva good thing for everybody, whether in the inner-city or elsewhere. If fewer people in Chicago have access to firearms, trust me, there would be a reduction in crime and in the number of drive-bys and other gun-related shootings. Sure, you could still hurt someone with a knife, but it's a big difference than having an AR-15, AK-47 or other repeating weapon equipped with a bump stock. If we could control that stuff, Kam, it would help this nation across the board.

KW: What inspired you to write Tears We Cannot Stop?

MED: I wanted to speak to my fellow citizens who happen to be white about the world's problems, like the predicament of unarmed black people who are being targeted. I had seen enough of the hurt and pain that black people endured, and I wanted to write a sermon to my white brothers and sisters suggesting we consider some alternatives. A little tough love in the name of reflecting upon our culture and our country in order to find the best route to racial redemption. And I wanted to be honest and open in my discussion with them about how we can make things better as a nation.

KW: You open the book by saying "America is in trouble" before blaming the long shadow of slavery. Don't you think a lot of white people feel like we're post-racial, given how we've had a black president and black billionaires?

MED: I think we were quickly disabused of that fallacy because race continues to play a big role in America, and because we now have a president who manifestly exploits racial animus and division, and who says racist things that are profoundly problematic.

KW: Why do you say that "whiteness" was an invention?

MED: Because people weren't born with it in their genes. There's no coding, no genetic structure for whiteness. Whiteness is a political identity. James Baldwin said it's "a fiction projected into the world." So, the society in which we live makes up the rules and determines the application of the idea of racial differences. It's made up. It's arbitrary and unnecessary. It's not biologically rooted. It's not physically passed on or inherited. It's merely something that the society has generated as a way of assigning value, worth and merit to some, and of devaluing others.

KW: Why did you devote a chapter to the five stages of white grief?

MED: I wanted to talk about the responses of white brothers and sisters to the society in which we live, and about the need to have some racial reconciliation, some racial reconstruction and some racial justice. There's grief in many whites from coming to grips that change is necessary and from recognizing that they have benefited from privileges which have been called out and need to be addressed.

KW: Why did you title a chapter "Nigger," if you consider the word an abomination?

MED: I can't pretend the word doesn't exist. It is an abomination when it's attached to heinous behavior that's legally supported by a government claiming to be for all the people. I wanted to make a distinction between black people who have appropriated the term and non-black people who use it in a hurtful and harmful manner.

KW: Patricia says "The Black Presidency" was one of the best books she read analyzing President Obama. She asks: If Dr. King were still with us today, what do you think he would have said about current race-relations in America?

MED: Despite the enormous progress we've enjoyed, King would point to the persistence of racial inequality, and say that we have to continue to fight against it in order to make this nation truly just.

MED: [LOL] I got some credit cards in there, a few dollars, some business cards from people I'm supposed to call, and some reminders of what I need to do today.

KW: Thanks again for the time, Dr. Dyson, best of luck with the show, and let's continue this conversation soon.

The Raw Word can be found on the following TV stations:

Check RawWord.com for more information and local listings. Viewers can join the conversation with Raw Word TV on Twitter or on Facebook.