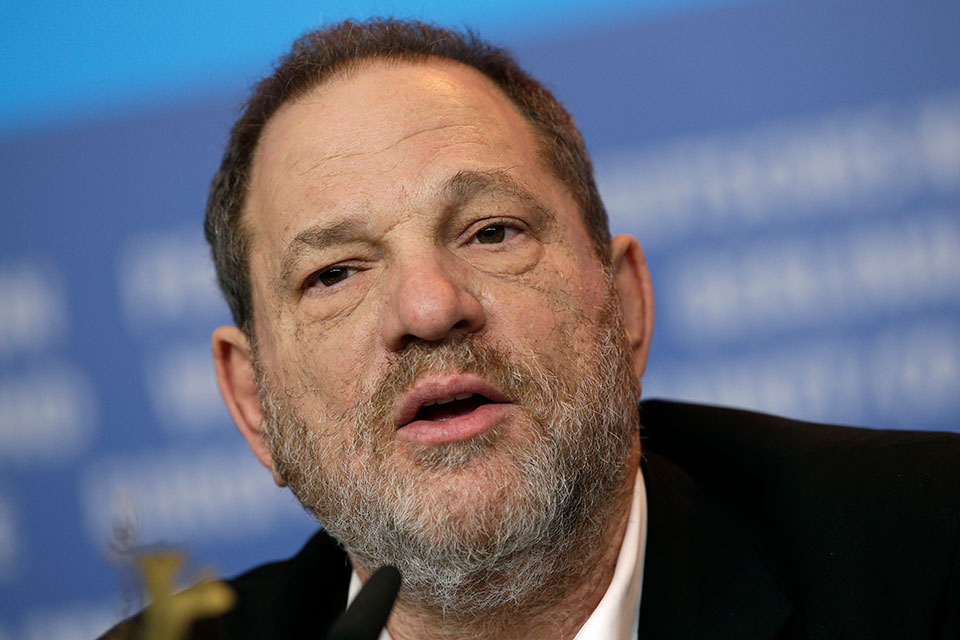 NEW YORK — In the three weeks since the string of allegations against Harvey Weinstein first began, an ongoing domino effect has tumbled through not just Hollywood but at least a dozen other industries. It's open season on open secrets.

Nearly every day has brought new allegations of sexual harassment, assault or misconduct, and subsequent firings, dismissals or the distancing of men in various stations of power, from highly regarded media pundits to celebrity chefs.

"There is no turning back," Asia Argento said Wednesday on Twitter. "All predators will go down."

Argento, the Italian filmmaker and actress who has said Weinstein raped her, declared that shortly after allegations of sexual harassment were leveled by six women against filmmaker Brett Ratner. (Weinstein has denied all allegations of non-consensual sex, while Ratner has denied each allegation against him.) Her social-media avatar is a simple photo of herself, with a fist raised high.

The posture and language of revolution has been adopted by others, too, like actress Rose McGowan, another alleged victim of sexual assault by Weinstein. At last week's Women's Convention in Detroit, McGowan declared: "Join me. Join all of us!"

What's unfolding, women's rights advocates say, is a rolling reckoning that's gaining steam with every new revelation of sexual harassment. What began with just a handful of women standing up against one of Hollywood's most pugnacious power players has turned into a movement of its own. Now that some of the silences and stigmas around sexual harassment have been shattered, the flood gates are open.

"This is the patriarchy starting to crumble," says Toni Van Pelt, president of the National Organization of Women. "I think that women are finally taking their power. They know they're strong."

In the three weeks since the first allegations were leveled against Weinstein, there have been at least 20 prominent men who have been forced to defend or apologize for past actions.

Amazon Studios chief Roy Price resigned after a television producer on one of Amazon's shows said he had sexually harassed her. Following allegations of sexual advances on an underage actor, Netflix halted production on Kevin Spacey's "House of Cards." A Roman Polanski retrospective prompted protests in Paris.

Sari Kamin was one of 38 women who came forward to the Los Angeles Times to say that the director James Toback sexually harassed her by luring her with the possibility of a film role. Toback has denied the claims but within days the number of alleged victims climbed past 300.

"Listening to women come out from the Harvey Weinstein fallout, that certainly empowered me," said Kamin. "It brought back a lot of painful memories and kind of unlocked something. It made me think: Well, if they can come forward maybe so can I."

"More than anything what made me want to come forward is: I felt like finally people were listening," said Kamin, a once aspiring actress who now works in publishing and food writing. "That was signaled very clearly with what happened with Weinstein. Another woman spoke and then another woman spoke and there was action. There were consequences. It told me not only that people were listening but that they wanted to do something — that they want to stand up and say: 'No more.' That was a powerful thing to tap into."

An air of "who's next" has settled over not just Hollywood, but elsewhere, too. NBC News terminated Mark Halperin's contract allegations that he sexually harassed a dozen women while at ABC News. John Besh, the New Orleans celebrity chef, stepped down from the company he founded after more than two dozen allegations of sexual harassment. Fashion photographer Terry Richardson, who has previously been accused of sexual harassment, was banned by Conde Nast. Accusations of harassment have been leveled against actors Dustin Hoffman and Jeremy Piven.

It has been a head-spinning few weeks that some believe is adding up to a landmark moment for a pervasive and under-reported problem.

Up to 85 percent of women say that they have been sexually harassed at work, according to the Equal Employment Opportunity Commission, but only a fraction of those cases are reported, partially due to the professional and legal risks for women who come forward.

In the wake of the Weinstein saga, millions of women have posted "me too" on social media, sharing their individual stories of sexual assault and harassment.

"I'm sensing a cultural shift," says Fatima Goss Graves, president of the National Women's Law Center. "In an issue that has usually been met with widespread disbelief and shaming, people have been able to really tell their stories of harassment and violence without shaming, without discounting and disbelief. And that's really empowering. I don't think you can just put that back into a box."

Some, however, are concerned that the Weinstein saga is unfairly tarring men with the same brush of scandal — that those who might be considered merely lecherous are being conflated with predators.

"As we grapple with these issues, we desperately need nuance," Cathy Young, a contributing editor at Reason, wrote in an op-ed for The Los Angeles Times. "Let's distinguish between abuse, minor bad behavior and innocent miscommunication. And let's not demonize men or patronize women."

Yet others see this domino effect as a long-overdue culmination in the decades-long fight for gender equality.

"Women speaking out about sexual harassment reminds me of one of the core reasons we came together for the March," said Teresa Shook, one of the organizers of January's Women's March the day after the inauguration of President Donald Trump. "'Hear our voice' was a unifying mantra for 'we will not be silent anymore.'"

Linda Sarsour, an organizer of the Women's Convention and of the march, drew even more direct lines from the Weinstein fallout to the political climate following the election of Trump, who famously boasted about groping women to "Access Hollywood."

"This is all connected," said Sarsour. "What you'll see over the course of next year is more women taking agency and getting into more powerful positions."

"This is a big moment in our history," Sarsour added. "Definitely one for the history books."