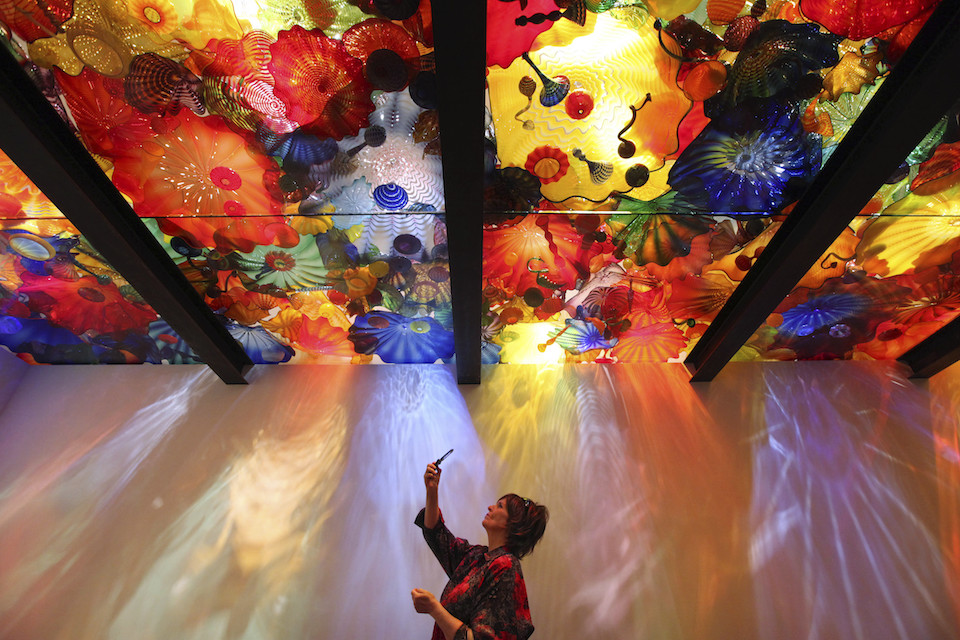 SEATTLE (AP) — The private studio of glass artist Dale Chihuly reflects his long obsession with collecting. Sheets of stamps cover one table; pocket knives are marshaled on another. Carnival-prize figurines from the first half of the 20th century line shelves that reach the ceiling.

Amid the ordered clutter, some items hint at more than Chihuly's eclectic tastes: a long row of Ernest Hemingway titles in one bookcase, and in another an entire wall devoted to Vincent van Gogh — homages to creative geniuses racked by depression.

Chihuly, too, has struggled with his mental health, by turns fragile and luminous like the art he makes. Now 75 and still in the thrall of a decades-long career, he discussed his bipolar disorder in detail for the first time publicly in an interview with The Associated Press.

He and his wife, Leslie Chihuly, said they don't want to omit from his legacy a large part of who he is, but they were also motivated to speak in part by a $21 million demand letter they had received from a former contractor who claimed to have contributed to Chihuly's art.

"It's a pretty remarkable moment to be able to have this conversation," Leslie Chihuly said. "We really want to open our lives a little bit and share something more personal. ... Dale's a great example of somebody who can have a successful marriage and a successful family life and successful career — and suffer from a really debilitating, chronic disease. That might be helpful for other people." 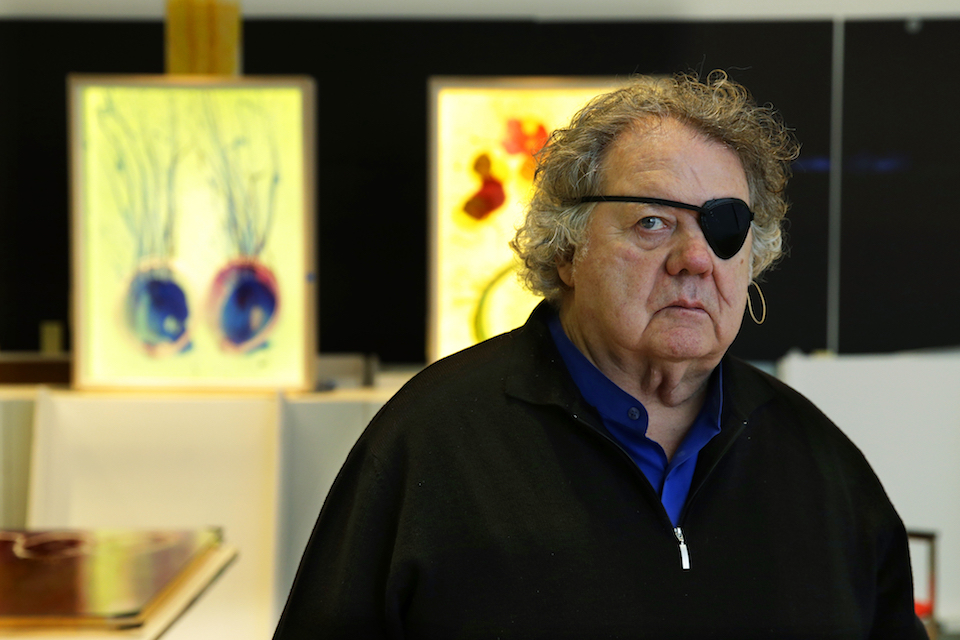 PHOTO: Glass artist Dale Chihuly poses for a photo in one of his studios in Seattle. Chihuly is a pioneer of the glass art movement and is internationally known for styles that include vibrant seashell-like shapes and ambitious installations in botanical gardens and museums. He lost sight in his left eye in a 1976 car crash. (AP Photo/Ted S. Warren)

The Tacoma-born and raised artist, who began working with glass in the 1960s and was heavily influenced by the Native American art he saw in his youth, is a pioneer of the glass art movement.

Known for styles that include vibrant seashell-like shapes, baskets, chandeliers and ambitious installations in botanical gardens and museums, he has said that pushing the material to new forms, creating objects never before seen, fascinates him.

Even in the past year he has found a new way of working with glass — painting with glass enamel on glass panes, stacking the panes together and back-lighting them to give them a visual depth.

He calls it "Glass on Glass," and it's featured for the first time in the new Chihuly Sanctuary at the Buffett Cancer Center in Omaha, Nebraska, and at an indoor-outdoor exhibit opening June 3 at the Crystal Bridges Museum of American Art in Bentonville, Arkansas.

But the flip side of that creativity has sometimes been dark. He began suffering from depression in his 20s, he said, and those spells began to alternate with manic periods beginning in his late 40s.

"I'm usually either up or down," Chihuly said. "I don't have neutral very much. When I'm up I'm usually working on several projects. A lot of times it's about a six-month period. When I'm down, I kind of go in hibernation."

He still works but doesn't feel as good about it. His wife noted that if he only went into the studio when he was up, he "wouldn't have had a career."

Asked what his down periods are like, Chihuly took a long pause. "Just pretty tough," he said. "I'm lucky that I like movies. If I don't feel good, I'll put on a movie."

Leslie Chihuly, who runs his studio, is more loquacious about the difficulties his condition has posed in their 25-year relationship.

They've tried to manage it as a family with various types of counseling, medication and a 1-to-10 scale system that allows him to communicate how he's feeling when he doesn't want to talk about it, she said.

Chihuly gave up drinking 15 years ago, and it's been more than a decade since he was "life-threateningly depressed," she said, though he's never been suicidal.

"Dale has an impeccable memory about certain things, but there have been certain periods of time when he's been hypomanic, as we call it, or depressed, and I'll be the keeper for our family and our business around those difficult times," she said.

She met him in 1992 after a mutual friend set them up. He was in a near-manic period, talking about an idea for bringing glassblowers from around the world to Venice, Italy, to display their art in the city's canals. He had no plan and no funding, but she was eager to help him realize his vision — one that would eventually be depicted in the public television documentary "Chihuly Over Venice."

Six months later, they traveled to an exhibit opening at the Brooklyn Museum in New York.

"It was like the lights went out," she said, choking back a sob. "All of a sudden the guy who was interested in everything ... that guy wasn't there." 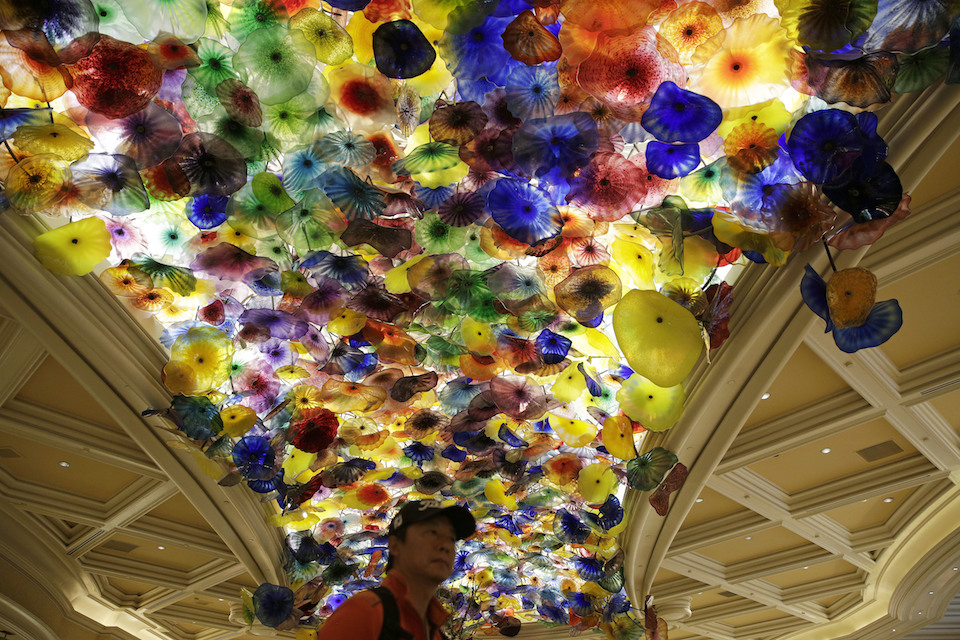 PHOTO: A man stands beneath an installation by artist Dale Chihuly titled, "Fiori di Como," (Flowers of Como), suspended from the ceiling of the lobby at the Bellagio hotel and casino in Las Vegas, May 31, 2017. Chihuly, who began working with glass in the 1960s, is a pioneer of the glass art movement. Known for styles that include vibrant seashell-like shapes, baskets, chandeliers and ambitious installations that can be seen in botanical gardens, hotels and the new Chihuly Sanctuary at the Buffett Cancer Center in Omaha, Neb. (AP Photo/John Locher)

Dale Chihuly remained quiet as his wife described that moment. A tear fell from beneath the recognizable eyepatch he has worn since he lost sight in his left eye in a 1976 car crash.

Though the mood swings were new to Leslie Chihuly at the time, they were familiar to the other artists Chihuly worked with. Joey Kirkpatrick met him in 1979, when she attended Pilchuck Glass School, which Chihuly founded in the woods north of Seattle in 1971.

It was a small summer workshop; the students constructed their own shelter. She and her partner, Flora Mace, spent many hours watching movies with him during his down periods.

"What amazed me about it is his persistence at picking the thing, his creative life, that would pull him along or keep him going through those times," she said.

"When he was up, he could call you up at Pilchuck on a Sunday night and say, 'Meet me at the airport at 10 tomorrow, we've got a flight to Pittsburgh to go to some demonstration.' It was always exciting. When he was down, there wasn't that. It was quieter."

Chihuly said the message he'd have for others struggling with the condition would be to "see a good shrink" and to "try to live with it, to know that when they're really depressed, it's going to change, before too long. And to take advantage when they do feel up to get as much done as they can."

Early this year, the Chihulys said, they received a demand letter from a man they had hired to do light construction work on several properties.

The man, Michael Moi, was threatening to file a lawsuit disclosing sensitive information about Dale Chihuly's mental condition unless they paid him $21 million, they said.

They denied that Moi had ever done any artistic work for Chihuly, and on Friday, though Moi never actually filed a lawsuit, the Chihulys filed a counter-claim against him, seeking to have a federal court declare that Moi had no part in the creation of any Chihuly art.