On Alberta, Roslyn Hill Saw Potential All Along 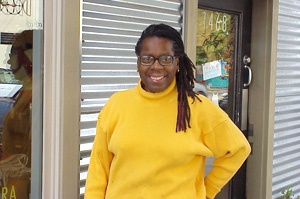 Northeast Alberta Street owes its unique style to Roslyn Hill. The Portland-born interior designer turned artist, architect and developer, owns several buildings on the street and has designed others.
One of the first to see the street's potential, Hill has been involved in its transformation from a down at the heel residential neighborhood into one of Portland's thriving arts and cultural districts.
Last year, the North Northeast Business Association honored her contribution to the community by presenting its Small Business Award to her company, NyanneCo.
A graduate of Cleveland High School, Hill attended Portland Community College for a year before moving to San Antonio to study interior design. But after she returned to Portland she began putting her design skills to work on the outside of buildings as well as the inside.
"I like designing things," she says. "I like taking existing areas and designing them to conform better to their use, so they can be used well."
When Hill opened "Shades of Color" a coffee shop and small art gallery on Alberta at Northeast 14th in 1995, she didn't know it would be the start of a street renaissance. But along with Magnus Johannesson, the developer who initiated Last Thursday in 1997, and developer Eric Wentland, who renovated several properties along the street, Hill went on to buy and redesign several blocks, which now are street landmarks.
"I bought the building where now Tin Shed (restaurant) is and I also bought the house on the corner of 16th and Alberta, the little red one," said Hill. "I built several buildings. I built the one where Imp is, the one where Fuel (cafe) is and the one where Mabel and Zora's (clothes store) is."
Working with architects and infusing her artistic vision into every building she touched, Hill tried to create an environment that would attract pedestrians and appeal to artists. In her vision Alberta Street would become a multicultural arts area.
It is hard to argue that Northeast residents were better off when Alberta Street was run down and the street's few shops had bars on their windows and doors. Yet the influx of affluent young and the trendy image of the street has driven up housing costs, pricing out some African American families and low-income residents.
Living "very close — three doors off of Alberta Street," Hill hopes the prosperity will extend to the whole community.
"I think probably my one concern is that Alberta would stay diverse and maintain that diversity that that neighborhood has" she said. That is the responsibility of everyone who lives and works on the street, she says. Employers have to hire outside of their own groups and landlords have to seek out diverse tenants.
"We all tend to mix with people who are more like us, so what happens is that when you do that you end up having an area that to all intents and purposes does rotate out certain people. I hope people in this neighborhood won't let that happen. Alberta is for all people."