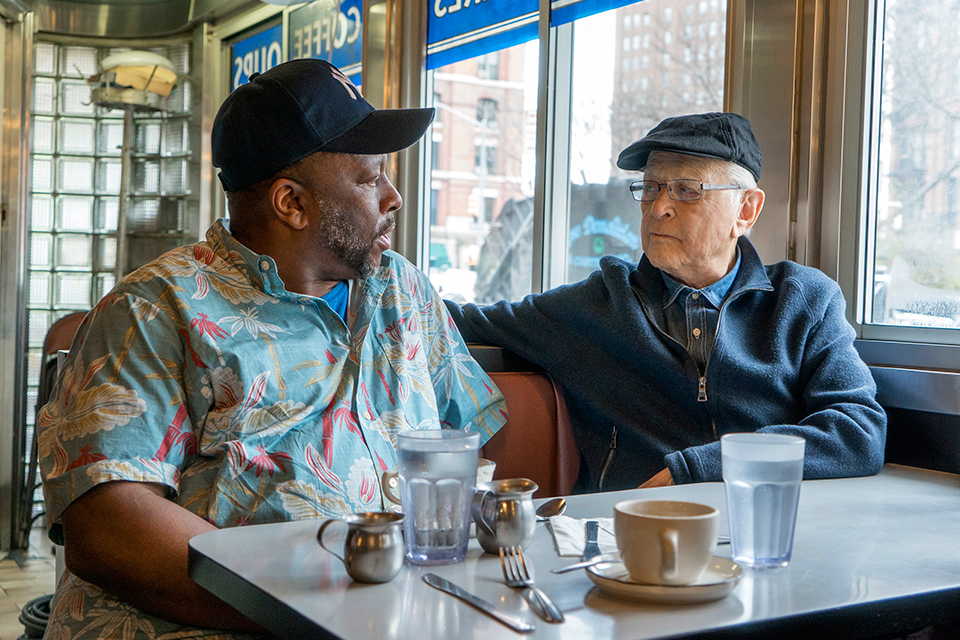 The landlord welcomed this incognito white man with a couple of offers.

Not so lucky was an African American man who had come to him the day before. The landlord, insisting nothing was available, brusquely turned that man away.

This undercover mission, as well as Lear's subsequent blowing the whistle on the landlord, was filmed for "America Divided," a star-driven, eye-opening probe into systemic inequality in the U.S. today not only in housing but also education, health care, labor, criminal justice and voting rights.

The five-week docuseries, which premiered Friday, September 30, 2016 at 9 p.m. EDT on Epix, employs the 94-year-old Lear (armed with a hidden camera) as one of its correspondents as well as an executive producer.

"I'm happy to have reached the 1 percent," said Lear, back in New York, where he spent part of his childhood, to shoot his report, "but I started as a kid in the Depression whose father was serving (prison) time. But what was wonderful about America was it offered me opportunity. And it promised that opportunity to everybody else, regardless of the color of their skin. After all these years, that promise has yet to be delivered on. I care about that."

Others who care include:

However unsettling, each story stands as more than a cry of distress. The narratives not only expose wrong-doers and bear witness to victims, but also highlight dedicated reformers.

In Lear's housing segment, viewers meet Fred Freiberg, executive director of New York's Fair Housing Justice Center, which flushes out discriminatory housing practices, then sues the offenders. It is Freiberg's agency that dispatches Lear and his African-American counterpart on their landlord-busting mission.

"With every story, we tried to show causes of inequality and the impacts of inequality, but we also tried to provide models of social action," says Solly Granatstein, a creator of the "America Divided" series. "We try to show that there are solutions and there is work being done, that it's not just simply a problem."

For the series, Granatstein, a nine-time Emmy-winning former producer at ABC News, NBC News and CBS' "60 Minutes," joined forces with Richard Rowley, whose credits include the 2013 Oscar-nominated documentary "Dirty Wars," and Lucian Read, with whom Granatstein teamed on their previous docuseries, "Years of Living Dangerously," which addressed the threat of climate change. (Their Divided Films produced the series in association with RadicalMedia.)

For this new venture, the trio set out to look at what Granatstein calls "the OTHER existential threat to our society and culture."

For this, they enlisted Lear, drawing on his show-business gravitas and his history of social activism. Common, too, signed on as a correspondent-executive producer, while TV hitmaker Shonda Rhimes ("Grey's Anatomy" and "Scandal") came aboard as a behind-the-scenes exec producer.

Then the task began to settle on stories and recruit star-correspondents to report them.

"There's no shortage of stories that we could have done," says Granatstein with a wan smile. "But we were looking for geographical and demographic diversity, and where there were heroic individuals and groups who were struggling to heal the divide, whatever that divide might be."

The project, in the works for more than two years, was timed to air during the home stretch of this election season, when issues from the series might help inform the campaign dialogue.

"If you get people attuned to these issues," said Granatstein, "then, eventually, there could be a whole societal shift."

It's a long slog, noted Lear, whose own crusade to stir the public reaches back to his socially conscious sitcoms like "All in the Family" nearly a half-century ago.

"But I don't want to wake up the morning I don't have hope," he declared. Boasting 34,000-plus mornings and counting, Lear persists among the hopeful on "America Divided."