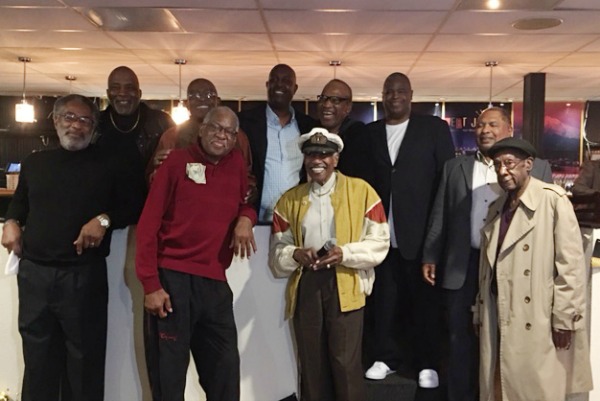 Portland Oregon native Jimmy Mayes returned home to a heartfelt celebration of life on his 70th birthday at Sweet Jam Restaurant on September 17, 2016.

Jimmy was overwhelmed by the family, relatives, friends, and Benson High School Alumni who paid tribute and honor to him for his love, protection, guidance, outstanding leadership, coaching, mentorship, entrepreneurship, and extraordinary community service.

Jimmy, the eldest of eight children born to James A. Mayes Jr. and Geneva R. Mayes, attended Eliot, Irvington and Boise Grade Schools. He is a 1964 Benson Polytechnic H.S. Letterman Graduate and participated in track, basketball and football.

In 1968 Jimmy received his Business Administration Degree from Linfield College in McMinnville, Oregon while energetically participating on their “Wildcats” football team.

Jimmy was well known in the Portland community as a Cub Scout leader and for playing sports for Geneva’s Mush ball, DeCola’s baseball and football teams.

After graduation in 1969 Jim entered as an Executive Trainee with First National Bank of Oregon. Soon he was promoted to Operations Officer at three different branches. In 1974 he entered Bank’s Loan Training Dept. and the next year he was named Commercial Loan Officer.

He was later promoted to Credit Analyst, then Analytical Coordinator in the Credit Dept and in 1978 he was named Manager of Burnside Branch.

March of 1979 Jimmy and third grade friend Nate Young went in business together and organized N. Young’s Steel fabrication Co. Inc. The likes of their work can be seen around the Portland area, on the Steel Bridge, Justice Center, and remodeling around downtown area.

In the late 80’s Jimmy relocated to Richmond, California and returned to banking until a client requested that he come to work for him in Asbestos Abatement. Jimmy was used to being a hard worker who kept long hours.

But this hard work wore his heart out and he suffered a massive heart-attack. Doctors were bewildered and amazed because his heart stopped for 24 minutes! Jimmy woke up snatching out wires stating he had to get home! If you believe in miracles, you’re a witness now because he received a 19-year old donor heart in 2006 and stands here to share his testimony!