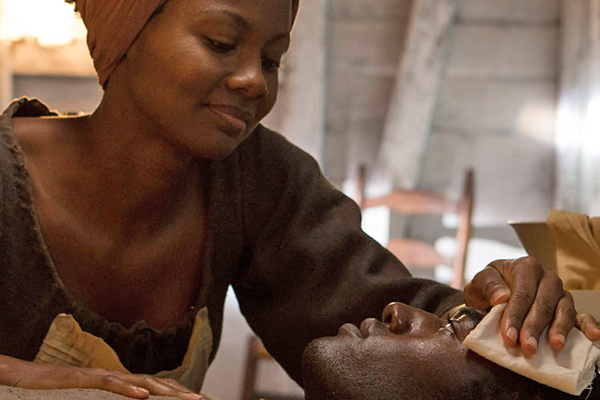 Born at Fort Knox, Kentucky on January 14, 1980, Emayatzy Corinealdi was an army brat whose family moved around a lot during her childhood as dictated by her dad's military career. After stints around the country and overseas, she put down roots in New Jersey, which enabled her to study at the Actor's Training Studio as well as William Esper Studio.

Here, Emayatzy talks about her latest out as Belle, Kunta Kinte's (Malachi Kirby) wife, in the remake of Roots.

Kam Williams: Hi Emayatzy, thanks for the time.

EC: The idea of bringing the story of the history of this country to a new generation was an important conversation that I believe is necessary, given the current climate of race relations in the United States.

KW: How did you prepare to play Belle Reynolds? Did you watch the original miniseries?

EC: What was happening everyday in this country: police brutality, injustice, people feeling angry and ignored, all of these issues were things that helped to prepare me. That coupled with the knowledge that I have since gained about enslavement and its history.

KW: Did you have any emotional moments on the set during the shooting?

EC: Every day was an emotional moment on set. The final scene, having her daughter Kizzy taken away, might've been one of the toughest by far.

KW: What message do you hope people will take away from the miniseries?

EC: Know your history. It can teach you who you are, where you have come from, and how to be a better person as a result. Also, I hope that young people especially will begin to have a better understanding of slavery and its effects, which are still evident today, To understand those parallels and, from there, begin ta be a part of the wave of hope to change things for the better.

KW: You recently portrayed Frances Taylor, Miles Davis' first wife, in the biopic Miles Ahead. Did you feel any extra pressure to get the role right, given that you were playing a real person?

EC: Definitely! I indeed wanted Ms Frances to be pleased while at the same time honoring my director's vision, along with rny own creativity. It is a balancing act which, I am glad to say, did pay off with her approval!

KW: Did you consult Frances in preparation for the role?

EC: For sure. We had quite a few lunches that were filled with great stories, laughter and truth.

KW: Are you a fan of Miles' music?

EC: I am now. I was not as familiar with him before the film. He was always this mysterious man on my father's album covers up until that point.

EC: Climbing trees when I was about 9 with my best friend. Climbing trees is still one of my favorite things to do. A tree and a good book and I'm happy.

EC: Absolutely! God has always been the head of my life, even before I knew it.

EC: Arroz con pollo, my father's recipe. He is a chef in Kansas City, and he is fantastic.

EC: I don't have one. I like what looks good on me and, as a result, I don't find myself drawn to one specific designer all the time.

EC: To hug my mother just one more time.

EC: A woman who stands up for what she believes.

EC: Called my friends up at almost midnight to play in a freshly excavated ditch near my house. It was dark, there were piles and piles of dirt, space and opportunity and each and every one of them came and we had a good time. Until the police came, that is. But hey, it adds to the excitement.

EC: Anton Chigurh from No Country For Old Men. He has taken the place of Jason who was my former favorite. I don't ever want to see that dude anywhere.

EC: Capital One was the first thing that carne to mind. [LOL]

KW: Thanks again for the time, Emayatzy, and best of luck with all your ventures.

To order a copy of Roots on Blu-ray, visit: www.amazon.com