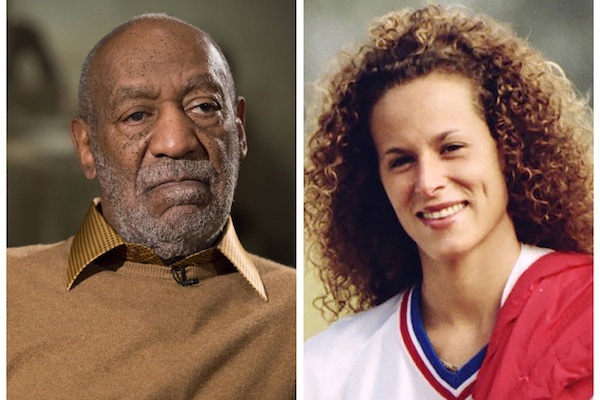 Bill Cosby faces a preliminary hearing Tuesday to determine if his criminal sex-assault case in suburban Philadelphia goes to trial.
Prosecutors had declined to charge the comedian-actor over the 2005 complaint, but arrested him in December after his explosive deposition in the woman's lawsuit became public.

In the testimony given in that deposition, Cosby is grilled about giving drugs and alcohol to women before sex; making secret payments to ex-lovers; and hosting Andrea Constand at his home. They knew each other through Temple University, where he was a trustee and she managed the women's basketball team.

Bill Cosby's wife refused to answer dozens of questions during a combative deposition in a defamation lawsuit filed by seven women who say the comedian branded them liars after they accused him of sexually assaulting them, according to a transcript released Friday.

Camille Cosby was subjected to intense questioning by the women's lawyer, who repeatedly pressed her to say whether she believes her husband "acted with a lack of integrity" during their 52-year marriage. The lawyer also asked if her husband used his position and power "to manipulate young women."

Camille Cosby didn't answer those questions and many others after her lawyer cited marital privilege, the legal protection given to communications between spouses. She repeatedly said she had "no opinion" when pressed on whether she viewed her husband's behavior as dishonest and a violation of their marriage vows.

About 50 women have publicly accused Bill Cosby of forcing unwanted sexual contact on them decades ago. Cosby has denied the allegations. He faces a criminal case in Pennsylvania, where prosecutors have charged him with sexually violating a former Temple University employee, Andrea Constand. He has pleaded not guilty.

Camille Cosby answered questions in the deposition Feb. 22 and again April 19 after her lawyers argued unsuccessfully to stop it. A judge ruled she would have to give a deposition but said she could refuse to answer questions about private communications between her and her husband.

Camille Cosby's lawyer, Monique Pressley, repeatedly cited that privilege and advised her not to answer many questions asked by the women's lawyer, Joseph Cammarata. The exchanges between Cammarata and Cosby became testy at times, and she admonished him: "Don't lecture me. Just keep going with the questions."

Using a transcript of a deposition Bill Cosby gave in a civil lawsuit filed by Constand in 2005 and a transcript of an interview she gave to Oprah Winfrey in 2000, Cammarata asked Camille Cosby about extramarital affairs her husband had.

"Were you aware of your husband setting up trusts for the benefit of women that he had a sexual relationship with?" Cammarata asked.

She didn't answer after her lawyer cited marital privilege.

Cammarata asked her about Shawn Thompson, a woman who said Bill Cosby fathered her daughter, Autumn Jackson, in the 1970s. Jackson was convicted in 1997 of attempting to extort money from Bill Cosby to prevent her from telling a tabloid she's his daughter. He acknowledged he had an affair with her mother and had given her money.

"It was a big deal then, yes," Camille Cosby replied.

She said she had "no opinion" on whether her husband's admission he obtained quaaludes to give to women with whom he wanted to have sex violated their marriage vows.

Her lawyer objected and instructed her not to answer when Cammarata asked her if she ever suspected she had been given any type of drug to alter her state of consciousness when she had sex with her husband.

A spokesman for the Cosbys declined to comment on her deposition.

The Cosbys have a home in Shelburne Falls, an hour's drive from Springfield, where the lawsuit, seeking unspecified damages, was filed.

In the sexual battery lawsuit filed in Los Angeles, Judy Huth says Cosby forced her to perform a sex act on him at the Playboy Mansion around 1974, when she was 15.

Bill Cosby's former lawyers have accused Huth of attempting to extort him before filing the case and have tried unsuccessfully to have it dismissed. Huth's attorney, Gloria Allred, said Hefner's testimony will remain under seal for now.

Hefner also was named as a defendant in a case filed Monday by former model Chloe Goins, who accuses Bill Cosby of drugging and sexually abusing her at the Playboy Mansion in 2008.

The Associated Press generally doesn't identify people who say they're victims of sexual abuse, but the women accusing Cosby have come forward to tell their stories.
___
AP Entertainment Writer Anthony McCartney contributed to this report from Los Angeles.