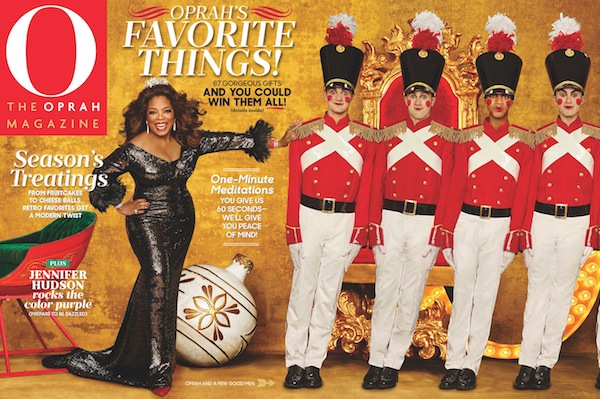 NEW YORK (AP) — A Kardashian-worthy phone case rimmed with tiny lights, a keepsake book of "Letters to My Love" and a banana, peanut butter and chocolate cake called the Elvis are among Oprah's Favorite Things of 2015.

This year's list, which guarantees companies a bump in sales, includes 87 items, from a doggie faux fur jacket from Park Avenue and little-kid animal boots made by Emu to an elegant box of cut flowers courtesy of High Camp and Oprah's favorite drawstring, tapered sweatpants (she owns three pairs of these, called the Vince from Melange).

While declaring the sugary Elvis namesake from Carousel Cakes "stupid good," she also put the traditional holiday yule log on notice by including a deep-dish cherry pie made by a California bakery, Sweet Lady Jane. And lest we forget about Hanukkah, there's a flat challah in the shape of a menorah, courtesy of Eli Zabar in New York.

The List, as loyal Oprah watchers call it, was revealed Thursday on ABC's "Good Morning America." It was previewed for an intimate group of media and business partners the day before high atop Manhattan's Hearst Tower, home of "O, The Oprah Magazine." Before she gave up her talk show, Oprah revealed her picks on TV and in print. Now, the December issue of the magazine carries on the holiday tradition she established more than 20 years ago.

What else made the cut this year? The multicultural line of Fashionista Barbies (of which Oprah declares: 'I love chocolate Barbie!') and roomy sweatshirts in soft pink, yellow and blue that pay homage to her favorite day of the week with the slogan, "I Love Sundays."

But for the queen and her right-hand elves, pal Gayle King and the magazine's creative director, Adam Glassman, the holidays begin the summer before, when Glassman scouts prospects at gift shows and markets around the country. He and King vet as they cull and chat with Oprah via Skype to narrow the picks.

"We try everything and gain weight doing that," laughed Glassman at Wednesday's preview. "We smell everything. We try everything on. And then we do a big summit in August, where we rent out a studio and we spend two days going through probably about 500 items."

This year, they're trying something new, sourcing stocking stuffers and bigger gifts at a variety of price points on Amazon.

"We really choose the products based on relevancy," Glassman explained. "Will people like it? Will it bring joy and passion to their life? And it's really about things that Oprah wants to give. That's number one. But then, companies are really made by being on Oprah's Favorite Things."

The latter, he said, has led to a little chat between Oprah's camp and the vendors picked about supply and demand.

"Once a company makes the list we have to explain to them about inventory. How much do they need? They need to make a lot. Some people get it and some people don't fully understand it until maybe it's a little too late," Glassman said. "And there are times when people call me and go, 'I wish I had 3,000 more, we sold out.'"

With the convenience of Amazon, he added, "I suspect before Christmas we will sell out of a lot of stuff."