Q&A With Lucien Darensburg of 'In Country' 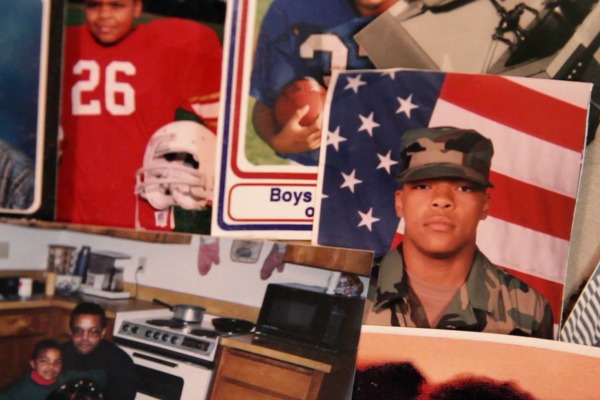 Arashi Young of The Skanner News
Published: 05 May 2015

For one weekend every year Oregon woods are transformed into a war zone as a mix of combat enthusiasts, veterans and a former South Vietnamese Army officer re-enact the Vietnam War.

The movements of the 2/5 1st Cavalry Division are featured in the documentary “In Country,” which premieres in Portland at Living Room Theatres on May 8.

The Skanner News interviewed Portlander and veteran Lucien Darensburg, one of the re-enactors featured in the documentary. We asked him about the movie, what it’s like to participate in re-enactments and the taboo surrounding the Vietnam War.

Here are excerpts of the interview, edited for space and clarity.

The Skanner News: How did you get involved in military re-enactments?

Lucien Darensburg: I met Joel Kinney at his niece’s grad party. I had never thought about re-enacting really, ever. I thought it would be watered down and I figured there wasn’t really anything in it for me. Joel’s passion for the group and collection of military memorabilia convinced me to come out and experience the group for myself.

I came out in the summer of 2012. I was tested mentally and physically and was able to use some of the skills I had learned through the military without leaving the country or truly seeing the death and dying involved with war. I left tired and sore with new friends and a sense of camaraderie that can only be felt after people go through a stressful experience and come out together.

TSN: Is there a particular battle or operation that is being re-enacted?

LD: We re-enact a time period, a specific year, generally between 1967 and 1970. Earlier than that, the gear gets harder and harder to find. Other than the year which is defined to ensure that everyone is wearing period correct uniforms and gear in the right configuration. We do not act as if we are characters from a movie or famous people. In essence we are portraying ourselves in said year.

There is no script or pre-determined outcomes. Everyone has a job whether it be rifleman, grenadier, medic, or RTO (radio operator). Other than that we are given wound cards in case you are “wounded or killed;” this allows the person to seamlessly transition from an uninjured soldier to a casualty and know what to do.

TSN: Is there a taboo surrounding the Vietnam War?

LD: Yes. I think that it’s common knowledge that the Vietnam War was seen as a bad war and many thought we should not have been there. I do not and we do not have an agenda when it comes to the re-enactment of the war. I re-enact to pay tribute to the soldiers that fought valiantly and courageously in Vietnam. Imitation is the purest form of flattery. I respect the men that fought in Vietnam and we as a group take our re-enactment very serious to ensure that we pay tribute in the right way.

TSN: Your re-enactments are more private than the staged reenactments of the revolutionary or civil wars. Is there a benefit to that privacy?

LD: We work harder than many of those groups. We are mobile. We cover multiple kilometers a day, cutting through thick brush in the heat of the day. Additionally the revolutionary and civil wars were fought in open fields in ranks in which they took turn firing muskets and cannons at each other. Vietnam was fought in many different types of terrain. We cover many types of terrain and if it rains we fight in the rain, if its 102 degrees we fight in the sun. Either way we fight together, we look out for each other.

TSN: What do you hope people get out of seeing this documentary?

LD: I hope people understand that we do this as a tribute to the men and women who served in Vietnam. Many of the soldiers, marines, airmen, and sailors were treated unfairly upon returning home. This is unacceptable! We strive to be the best portrayal we can be of the Vietnam experience. Furthermore, I would like people to know and understand that we do not glorify war, we do not re-enact war crimes, it’s more than playing war.

Another note is re-enacting isn’t for everyone and if you don’t like it, don’t do it. The fact is we have helped veterans through some of their experiences. We have inspired people to re-visit their experience and let some of the bad things go and enjoy the finer things and finer times in life. We have provided opportunities for veterans to relive a time when they were fighting for what they believed was good and even when they felt strongest while they fought for their country.

Visit the 1st Cavalry website and read their mission statement.

“In Country” is available for download through iTunes and Amazon.com.