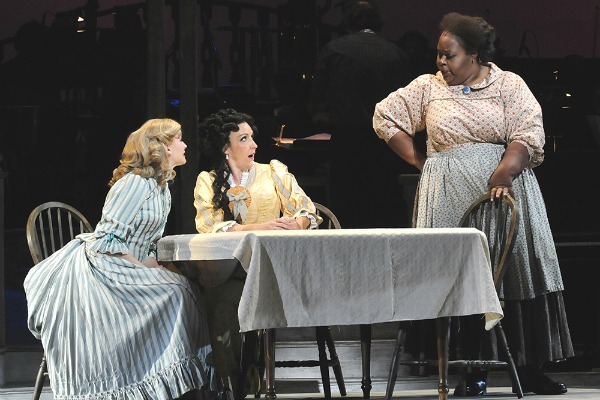 As “Show Boat” steers its way into The Portland Opera Season, The Skanner News interviewed Angela Renée Simpson, who plays “Queenie” in the production.

It is Simpson’s first return to the Portland performing arts scene since she was in a 1995 production of “Porgy and Bess.” Simpson talked with us about how she got to the stage, what her character means to her and how The Portland Opera is taking on the racially charged “Show Boat.”

Here are excerpts of that interview, edited for space and clarity.

The Skanner News: How did you get into musical theater?

Angela Renée Simpson: Well, I've been an opera singer for over 27 years now. I did my first “Show Boat” in 2006 in London. It was the first time I've done a musical since high school. My biggest thing was movie musicals. I thought that singing and being in a movie were the two best things, ever, in the world. That's what I wanted to do, movie musicals, but as I was growing up they stopped making them.

I was content to sing musical theater when I first got out of college, but the program I was in, I had to avail myself of classes in classical music and opera. I told myself if I didn't like it after two years, I would leave. Well, I did like it and I took to it, my voice definitely took to it and that's what I've done since college.

TSN: Tell me about your “Show Boat” character, Queenie.

ARS: She cooks the meals, she oversees the other people who are hired to clean the boat and to prepare the boat for shows. I want to say she's a jack of all trades. I like the fact that she doesn't take any guff from anybody, especially when she is called the n-word in the beginning of the show.

My back-story with her, my big question is, "was she a slave?" The time period is maybe only 12

years after the emancipation proclamation, so was she a slave? It’s something I haven't answered yet. She's very strong willed as you see with how she acts with her husband. I think she is respected, I think, to a point. She's treated like an equal, in some respects.

TSN: What is your favorite line?

TSN: “Show Boat” tackles some controversial racial topics. Did the production do a good job of exploring these issues?

ARS: I think it is very brave of them to keep the words as far as dialogue is concerned. I think the people of Portland are very conscious about and sensitive about the n-word being used. I'm very glad they are using the word. I think if you whitewash history, then you tend to repeat it. If you don't remember what was done, somewhere down the line, it will repeat itself.

(The Director) Chris Mattaliano was very, very adamant about preparing the audience for what was about to be said. I myself am a person of shock value -- just don't tell them, just do it and see what the repercussions are afterwards.

I don't have any problem with the word, it was during that period, that's what they were being called. As long as it stays on stage, it's perfect, but once we come out of that, then it’s a problem.

TSN: What will Portland audiences get out of seeing “Show Boat?”

Bob Kingston, (the Portland Opera's resident historian) said, "Theater changed when it came to ‘Show Boat,’ it was never going to be the same after it."

It was the only piece that had incorporated music into the storyline of what was happening on stage, as opposed to just having comedy reviews and little skits and things like that, that were separate and had nothing to do with each other. “Show Boat” was the musical theater piece that put those things together and moved the music along with the story.

Get ticket information at www.portlandopera.org.