Q&A With Julieanna Richardson Founder of The HistoryMakers 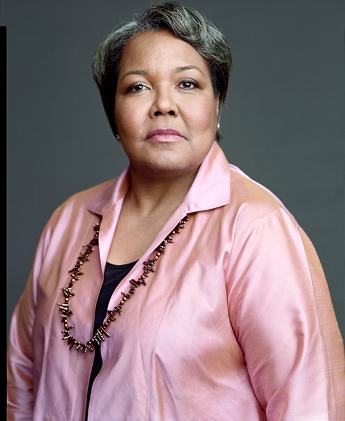 American Masters: The Boomer List will screen on PBS for the first time, Tuesday, Sept. 23. You can also watch the video here online for a time.  Created by acclaimed filmmaker Timothy Greenfield-Sanders (The Black List, The Latino List, The Out List) The Boomer List tells the story of the baby boom generation through the lives of 19 influential people—one born each year of the baby boom,  1946-1964. Among the interviewees on the list are: Samuel L. Jackson, Kim Cattrall, Tommy Hilfiger, Amy Tan and Deepak Chopra.

Julieanna Richardson represents the year 1954. A Harvard trained lawyer, she worked as a cable television executive and corporate lawyer before founding The HistoryMakers project. The HistoryMakers videotapes  interviews with African Americans from all walks of life as a way to illuminate the Black experience in America.

Some of the HistoryMakers are famous. President Barack Obama was interviewed when he was an Illinois state senator, and the collection includes interviews with: General Colin Powell, Harry Belafonte, Russell Simmons, Isaac Hayes, Eric Holder, B.B. King, Nikki Giovanni, Diahann Carroll, Ossie Davis and Ruby Dee. Many of the people interviewed are not famous, but like Seattle's Carver Gayton  have made significant contributions to their communities.  Richardson talked to The Skanner on the phone Sept. 8.

TS: How did you get involved with The Boomer List?

JR: I got a call and email from Timothy Greenfield-Sanders saying they wanted to feature me for the year 1954, which I think is the best year. (laughs)  I do I've always thought that. It's the year of Brown v Board of Education, but I thought it before.  I've always taken great pride in being part of the boomer generation. What I didn't know was that it spanned such a period of time. I didn't know that. In fact I would have told you I was at the tail end of the boomer generation, but I'm smack dab in the middle.

TS: What do you think are the signature qualities of the Boomer generation?

JR: We were very active in the civil rights movement and we are also beneficiaries of that movement. I would consider myself a direct beneficiary of affirmative action and things like that. I also think that there was a lot of hope and there was a lot of drive and ambition to be the first, to make a difference and to be examples for our race.  A lot of drive, ambition and hope:  I think that epitomizes the boomer generation.

We were going to change the world in all kinds of ways, and we have. Just think of the health food that is now so predominant, we have yoga, rock and roll, R&B, Motown. I've been to several weddings with a hip hop soundtrack. The music we listen to now is our music.

Where did you grow up?

JR: I was born in a small steel-mining town near Pittsburg and I grew up in a small town called Newark, Ohio, that's 35 miles southeast of Columbus. It's a very mid-Western environment.  My father always believed in education. He wanted me to be a lawyer and I wanted to be in theater. I ended up double majoring in theater arts and American studies and ended up going to Harvard Law School. I loved and adored my father a great deal. I'm named after him: His name was Julius Laconya Richardson and I'm Julieanna Lynn Richardson.

TS: How did you come to create The HistoryMakers?

JR: I wanted to leave a legacy. I was in my mid-40s at a place where I wanted my life to stand for something more than myself, and I didn't have children to carry on any kind of legacy. The HistoryMakers was tremendously influenced by the people I interviewed during my sophomore year at university when I was doing research on the Harlem Renaissance.

And I have to say this goes back to being nine years old when I was the only Black kid in my class in Newark, Ohio. The teacher asked us to all talk about our family backgrounds, and that was a time when we only talked about Black people when we researched George Washington Carver and slavery. I even think there was a picture of people in chains. So it was hard for my nine-year old brain to think of all he had done with peanuts, when all we had been were slaves. I just couldn't reconcile that.

Spring forward to my sophomore year at Brandeis University and we were studying about and doing research on the Harlem Renaissance. So I go out with my little tape recorder and I'm interviewing Butterfly McQueen, who starred in Gone with the Wind, and she had that little voice just like she talked in the film. She was living in impoverished conditions in Harlem and that had a profound impact on me.

I remember sitting in the New York Public Library and listening to “I'm just wild about Harry” and the like. I learned  that these songs had been written by the Black songwriting team of Noble Sissle and Eubie Blake.  So I had found myself. I'd found my place in American society. And those stories stayed with me, even though I went off marching to corporate law and lost myself on that conveyor belt.

My father reminded me when I created the HistoryMakers project that I was really back where I started, both with American Studies and with storytelling.

TS: How is the HistoryMakers project progressing?

JR: I've raised about $19 million over a 14-year period, but this is a $30 million project. We didn't do interviews for five years, but this year we are getting back on track. In fact, this year we had a big announcement. We have 9,000 hours of testimony on tape and that collection is on permanent depository in the Library of Congress. So we are pleased about that.

This project has had a profound impact on me. This has been a tremendous gift, the chance to sit down and talk to people for three or four hours in length. That's why the day I did my interview I was very reflective, because I am on a treadmill right now trying to run a nonprofit.

TS: One of my journalist heroes is the late Studs Terkel and your work is similar.

TS: The HistoryMakers is important here in the Northwest because you  have interviewed people from Seattle’s African American community.  Trailblazers like Carver Gayton may not be nationally known but they made a big impact here.

JR: Definitely. The Gaytons are very, very important and their history is amazing. A lot of people don't think of African American people being from the Northwest. So we interviewed people like Carver Gayton, director of the Northwest African American Museum; his brother, attorney Gary Gayton; and Dr. Ward Marshall, whose family history in the Pacific Northwest goes back to the 1880s.

TS: How important is it to record the stories of African Americans who are not celebrities?

JR: I think it's extremely important. Because while we have lost a lot of our history, we still have a lot to record. That’s true for American society in general, but especially is the case for the African American community. This is a community that does not know itself, and that resonates with the larger community.

A lot of people naturally assumed my project was about civil rights –civil rights and slavery – because that's all they can really think of in terms of the black experience. So we are trying to broaden that understanding, which is absolutely critical.

HS: What will people enjoy as they watch The Boomer List?

JR: I learned a lot. I did not know the boomers went on to 1964, and I'm proudly of that generation. I think a lot of the things that kids are doing and are hip now are a re-run of things that came from the boomer generation: Bell bottoms, afros, vinyl. Motown is still strong, and even the activism that came out of the 60s, you see young people trying to revive now.

TS: How do you find people to interview for The HistoryMakers?

JR: We talk to the library and the Black organizations like the NAACP and the Urban League, and you can make recommendations on our website. That’s how we found a woman called Jeni LeGon who was living in Vancouver BC. She was the most pre-eminent black tap dancer, and she toured with Count Basie.