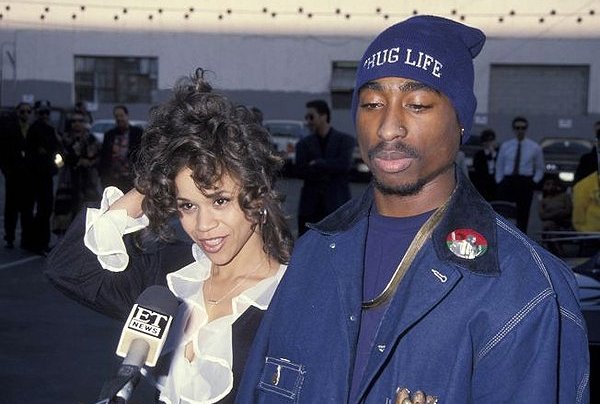 Rosie Maria Perez was born on September 6, 1964 in Bushwick, Brooklyn where she was raised in a Catholic orphanage after being abandoned by her mom and taken from her aunt. She made a most memorable screen debut as Spike Lee’s girlfriend, Tina, in Do the Right Thing, and later landed an Oscar-nomination for a nonpareil performance in Fearless. Her many other credits include White Men Can't Jump, Won’t Back Down and The Counselor.

Rosie serves as the Artistic Chair of Urban Arts Partnership and sits on the Presidential Advisory Council on HIV/AIDS. Here, she talks about her career and her autobiography, “Handbook for an Unpredictable Life.”

Kam Williams: Hi Rosie. I’m honored to have this chance to speak with you.

KW: I really enjoyed the book!

RP: Oh, you’re one of the few journalists who actually read it before speaking to me. That’s wonderful!

KW: What inspired you to write your autobiography?

RP: I didn’t really know at first. I kept asking myself, “Why am I doing this?” because I’m such a private person. Then, one day, the head of programming at my charity, the Urban Arts Partnership, said she was excited that I was writing it, and she hoped I’d be giving copies to the students. My first reaction was “No,” since the subject-matter was really heavy, and because of some of the language I was using. But she then reminded me that I’d already shared my stories with them, and I almost burst into tears. I realized, “Oh my God! That’s why I’m writing it.” Those students had been the first people, outside of my inner circle, to hear my story. It happened when I participated in one of our programs called Life Stories, where we encourage the kids to open up and share so they can understand their lives. One day, I was challenged to share my story with them. That‘s where finding the inspiration and strength to write this book began.

KW: I found it very moving, especially since I had no idea about any of it. I just thought of you as that bubbly, talented, attractive actress I’d seen in movies and on talk shows.

RP: And I am that person, but I’m also this one. And the reason I decided to share with the students was because I saw them come into the Academy so burdened by life every day. When you are a low-income, poverty-stricken, Title 1 kid, you have so much to endure just waking up. So, you may have a bad attitude or a chip on your shoulder before you even get to school. You may arrive so anxious, angry, hungry or apathetic that you may say to yourself, “Why should I pay attention in class?” You might be beaten-up on the way to school, because you live in a bad neighborhood. Still, I had to inform them, especially the seniors, that they didn’t have the luxury of bringing all that baggage into the world which they would be stepping into as adults. I’d say, “You need to come to terms with it, or let it go. One or the other. And if you can do both, then you’re golden.” If you are unable to get past that baggage, the opportunities that should be yours will not be yours.

KW: Well, I applaud you for overcoming so many obstacles. After all, the odds of making it in Hollywood are long enough for someone coming from a privileged background.

RP: I hear you, since the odds were supposedly great. But you know what? I knew I was going to be successful from day one. From day one. That’s why it throws me whenever someone says it was such a fluke that I was successful.

RP: I would say tenacity and perseverance. You have to be like a dog with a bone. You can’t just let it go. And number one is belief. You have to believe in yourself. You need to have the audacity to be great.

RP: Wow! No one’s ever asked me that question. I wouldn’t try it, but the only one that popped into my head is A Woman Under the Influence, the John Cassavetes film starring his wife Gena Rowlands. Her depiction of mental illness frightened me. Her performance shocked me, because it was so simple.

RP: No, I can’t think of anything, although that question is probably out there.

RP: Me! I see me, and the reality of me gets clearer as I get older, and I’m loving it.

RP: The crib, the peach bedspread, and the French doors at my aunt’s house when I was 2.

RP: To go to college.

RP: To be honest, “Drunk in Love” by Beyonce’. http://www.amazon.com/exec/obidos/ASIN/B00HFWYA3E/ref=nosim/thslfofire-20

RP: That my husband [Erik Haze] and I will be in premium health until we take our last breaths, so that we could enjoy every single second of our lives together.

RP: With my husband and my family. It wouldn’t matter what we were doing. We’d probably be telling each other how much we appreciate each other while watching boxing and eating a good meal. Of course, it would turn into a party.

RP: Yes, to go back to school and get a degree.

KW: What was it like to skyrocket to fame?

RP: It was both difficult and wonderful. It was quite difficult for me because, being raised in a home, I’d come to hate being pointed at whenever we went out in public in a group. It’s still uncomfortable for me to be stared at, although I’ve learned to deal with it better. It makes me self-conscious.

RP: I’m more guarded and shy on the carpet. At home, I’m the silliest cornball who talks way too much and wants to be quiet and left alone at the same time. And I love to entertain, but in a small, intimate way. But I feel like I can be myself on Craig Ferguson’s show. I have so much fun on his couch, because he’s an idiot. That man cracks me up. I think there’s a kinship in our silliness. I dance like he does in my living room all the time.

RP: You might think it was being abandoned by mother. But no, it was being taken away from my aunt at the age of 3, because I was self-aware by then and I knew what was going on. That was my biggest heartbreak, and it informed a lot. I didn’t want it to be my whole story as an adult. So, I’ve learned to heal that heartbreak and move on.

RP: About an hour ago during a meeting at my charity. I laugh a lot. It’s disgusting how much I laugh during the day.

RP: [LOL] I don’t know that I would encourage anyone to follow in my footsteps.

RP: As someone that gave back, because the people I remember the most in my life are the ones that gave.

KW: Thanks again for being so forthcoming and so generous with your time, Rosie, and best of luck with both the book and your career.

RP: Thank you, Kam. I really, really appreciate it.