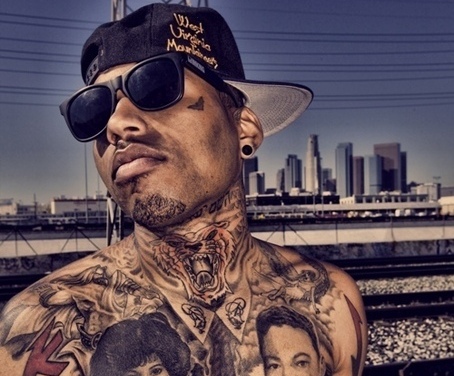 Kid Ink performs in Seattle, Wednesday April 2 at the Neptune Theater, and in Portland, Thursday April 3 at Refuge Pdx. Also on the bill in Portland:DJ OG One, Yung Mil, Champagne James, Scottie Deuce. He spoke to us on the phone about his ambitions and working with Chris Brown. His latest album is My Own Lane.

Where did you grow up?

When did you start producing?

I started producing around 16 years old as a hobby. And I did everything.  I was having fun, not judging myself or having anyone judge me too much. It was just about having fun with the music and doing it with my friends.

You’ve made music with everyone from Sean “Diddy” Coombs, Wale and French Montana to Nipsey Hu$$le, 2Chainz and Tyga?  What was the most fun you had?

I think I have the most fun when I’m in the studio by myself. I think I can be a little more free and creative. Just going in there and having fun and not focusing on any directions to go with. I think when you get in the studio with other people, sometimes it gets a little forced,  trying to make a certain kind of music.

You know I’m always trying to get into the studio with people who work like me – and probably Chris Brown was the closest to where you are just having fun in the studio.

Chris Brown has a bad boy rep. But you enjoyed working with him.

Yes. He’s a hard worker in the studio and he does his job 100 percent. I feel he’s definitely a great entertainer and performer. We got a platinum single out of it and it was definitely worth it.

The year 1996 is probably my first real memory. Hip Hop was something I grew up on, but I wasn’t born until 1986 so I didn’t start really processing it until I was about 10 years old. In that era it was definitely: Tupac; Biggie; Method Man; Redman; DMX: there was a lot of music going on both the West Coast and the East Coast that was making a real impact.

What’s the biggest change you’d like to see in America?

Where do you see yourself in five years?

There’s no telling. I try not to think too much about the past or the future too much. But as a musician, once it is your job and you’re not just doing it for fun, then I think you want to compete for all the top awards. You want to be at the top of your job. You want to get the awards, and the acknowledgement. Getting that acknowledgement is your biggest success.

Do you have a message for your fans here in The Northwest?

I want to let my fans know I appreciate everyone who went out and copped the, “My Own Lane” album and brought the single to where it is. It really represented hard-core and the streets – I really fought for that. And I hope everyone is just ready to see this new show with all the new songs and all the new stage production. I’m definitely excited for the show.