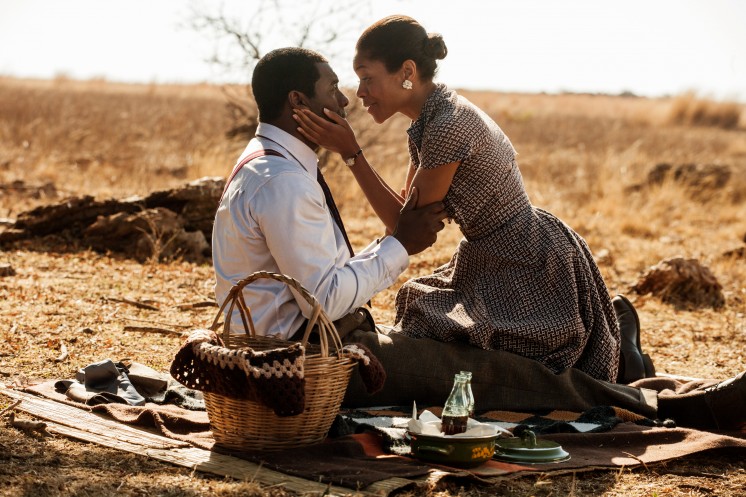 She also appeared in Danny Boyle's production of Frankenstein at The National Theater in London alongside Jonny Lee Miller and Benedict Cumberbatch. In the The First Grader, she played 'Jane,' a first-grade teacher in Kenya who fought for the right of an 84 year-old man to be educated, even if it meant learning in a classroom with six-year-olds.

The London-born actress enjoyed her first major breakthrough performance in 2002 in Danny Boyle's 28 Days Later, and she went on to receive further critical acclaim for her role as 'Tia Dalma' in Pirates of the Caribbean: Dead Man's Chest, and Pirates of the Caribbean: At World's End. Her other major film credits include Miami Vice, Tristram Shandy: A Cock and Bull Story; Street Kings; and Sex & Drugs & Rock and Roll.

After earning a degree in social and political science with honors from Cambridge University with, Naomie trained at the prestigious Bristol Old Vic Theatre School. Here, she talks about her latest outing as ‘Winnie Mandela’ opposite Idris Elba in Mandela: A Long Walk to Freedom.

Kam Williams: Hi Naomie, I’m honored to have another opportunity to speak with you.

KW: What interested you in Mandela: Long Walk to Freedom?

NH: I’d made a film produced by Anant Singh and David Thompson and directed by Justin Chadwick called The First Grader. And while promoting that movie in Toronto, they asked me whether I wanted to do Mandela. I said, “Yeah!” because I really wanted to work with the same team again and also because I wanted to be part of a film honoring Nelson Mandela’s life.

KW: What did you know about Winnie Mandela when you accepted the role?

NH: I actually had no idea who Winnie Mandela was. Obviously, I knew she was Nelson Mandela’s wife, but I thought the role was basically going to revolve around her supporting him. I had no idea that she was a political activist in her own right, and that she was integral to the anti-Apartheid movement.

KW: Editor/Legist Patricia Turnier asks: What did it mean to you to portray Winnie Mandela and what is your vision of her?

NH: Since, as I said, I was unfamiliar with Winnie Mandela, for me, this project was really more about a celebration of Nelson Mandela. And he, for me, represents this incredible iconic figure. But in terms of who I discovered Winnie to be once I did all my research, which was pretty intense and fairly in depth, I found her to be the most complex character I’ve ever played. She’s almost seven different characters in one. She’s done some controversial things that are very difficult to justify. She’s also a woman of immense compassion. And she’s a person of the people. In South Africa, she’s known as Mother Africa, and is loved and admired by many for having helped hundreds of thousands of people. So, she’s complex, and very hard to define in a brief space of time.

KW: Children’s book author Irene Smalls asks: What kind of research did you do in creating the role?

NH: I read Nelson Mandela’s autobiography, “Long Walk to Freedom,” I watched documentaries about the Apartheid era, I interviewed people who knew Winnie, I read biographies about her, and even got to sit down with her and ask her questions about her life.

KW: Larry Greenberg asks: Did you spend any time with Winnie’s daughters Zenani and Zindzi Mandela in preparation for the film?

NH: Yes, I had an opportunity to go out to dinner with both Zenani and Zindzi.

KW: Obama biographer Dinesh Sharma asks: Did you actually shoot on location in the prisons in Joburg, Robben Island and Pretoria?

NH: No, we had an extraordinary set designer. When you watch the movie, it looks like we shot on Robben Island and those other places. But it was all replicated in studio. However, we did shoot in South Africa, in Cape Town and Johannesburg, and in the actual courthouse where the trial took place. So, there are some historical moments which were filmed on location in the same places where they originally happened.

KW: Kate Newell asks: What was the most surprising thing you learned about Winnie that you didn't know going into the film?

NH: Learning how integral she was to the anti-Apartheid movement, and that Nelson Mandela might not have become the Nelson Mandela we know today without her. Also, learning about the contributions of so many women who sacrificed their lives was very educational for me.

KW: Patricia also asks: What do you want audiences to remember most about the movie?

NH: I hope that they remember this extraordinary period in history that should never, ever be repeated. And I hope that they take away from the film that freedom was hard won. I want people to remember to cherish their freedom. In terms of Winnie, it’s not my place to judge her and some of the actions that she’s taken. What I wanted to do was show with as much compassion as possible a comprehensive and detailed portrayal of how she started out in life, why she made the choices she made, and who she ultimately became. I hope to bring some understanding to the woman.

KW: Kevin Williams asks: Did you have any reservations about playing Winnie? Many actresses might have declined the role given her tarnished image.

NH: No, it’s not like I always want to play saints. The sinners are actually much more interesting to play, because they’re more complex. And as an actor, that’s what you’re always looking for, complexity and layers.

NH: Wow! If I could sing, I would do the remake of West Side Story or The Sound of Music, because I’m obsessed with musicals. But unfortunately, I can’t sing or dance, so I don’t see that happening anytime soon. [Chuckles]

KW: Harriet also asks: Was it a blessing or a bane to be cast as a Bond girl?

NH: Definitely a blessing. Definitely! I’m very proud of my role as Eve, and really enjoyed the experience. And it’s been a great boost for my career. So, 10 percent a blessing.

KW: Rel Dowdell asks: Do you find that opportunities are opening up in Hollywood for actors and actresses of color from outside of America?

NH: Yeah, I find that America has always embraced international talent. That’s why so many people from all around the world have come to Hollywood to make films. It’s a big melting pot, and I’m very grateful for that. If I’d stayed in England, I doubt if I’d enjoyed the kind of career that I’ve had.

Last time we spoke, you were reading, “How to Leave Twitter.”

NH: I recently began reading the Steve Jobs biography, but I haven’t finished it. It’s still sitting by my bedside.

NH: Now that’s interesting! I just got off a plane, and on the flight I watched 20 Feet from Stardom which featured a fantastic collection of songs from the Sixties and Seventies.

NH: That’s really interesting as well. A challenge. Playing a completely different role, something that makes me almost feel scared. That’s exciting for me.

NH: Saying “Yes” to doing 28 Days Later, although there’s no way I would have ever turned it down. That role, for me, was really the catalyst for everything.

NH: Nothing dramatic, eating with my family and my closest friends because that is my favorite thing to do.

NH: I never ever thought about becoming famous. I just wanted to become an actress and make great movies and to play roles that challenged me. So, I never made that sort of commitment to myself.

KW: The Melissa Harris-Perry question: How did your first big heartbreak impact who you are as a person?

NH: My first big heartbreak? Gosh, I only dated him for about three weeks and ended up being heartbroken for a year. It was awful! That taught me that the heart is quite fragile, and to look after and cherish it, and to not give it to just anybody.

NH: At home, I like comfy clothes, so I ‘m pretty casual in the way that I dress. But on the red carpet, I like to glam it up and really push the boundaries in terms of fashion.

NH: [Whispers] Wow! That’s really interesting. Any superpower? That would be amazing. [In normal voice] I would like to have the power to heal the sick.

NH: I’d definitely be a novelist. I like the idea of creating an imaginary world with imaginary characters, which is somewhat similar to what I do as an actress.

KW: The Pastor Alex Kendrick question: What do you wish other people would note about you?

NH: Nothing. I like the idea of being mysterious and people not knowing too much about me. I think it’s nicer if they focus on the characters I play as opposed to on me as a person.

KW: Pastor Alex also asks: What motivates you at this stage of your career?

NH: Playing inspirational characters who really have a voice and something meaningful to say.

NH: I’m always afraid! There’s a great book called, “Feel the Fear and Do It Anyway,” which is how I feel is the best way to live. We all feel afraid of so many things, but when you do them, you realize they’re a lot less scary than you thought.

NH: Happiness isn’t a constant state. One has moments of happiness throughout the day, but we’re meant to experience anger, joy, sadness, pain, excitement, a full range of emotions.

NH: I have a good laugh everyday. And just before this interview, I was laughing while dancing to imaginary music.

NH: Dark chocolate. I know sugar isn’t good for you, but every now and then I succumb and have a bit.

NH: As somebody who lived life to the fullest.

KW: Thanks again for the time, Naomie, and congratulations on your tremendous performance, one not to be forgotten during the upcoming awards season.

NH: I really appreciate that, Kam. Nice to speak to you again. Take care.