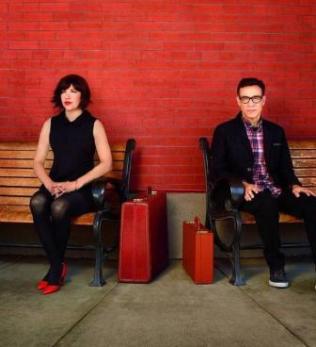 There's a reason Portland looks so inviting on the hit IFC show "Portlandia."

"We film only during the summer so it appears particularly sunny and bright, though I will tell you it is not that way always," co-creator and co-star of the show Carrie Brownstein told CNN. "It's a pretty special place and there is such fondness for me for the city."

The city seems to love Brownstein and her creative partner Fred Armisen right back, as evidenced by an award they received from one of the travel boards in Oregon. After all, they have helped draw plenty of fans with their quirky sketch comedy series, which returns for its third season Friday.

Brownstein recently spoke with CNN about the changes fans can expect this season, her dream guest stars and "the hipster method of acting."

CNN: How will season three of "Portlandia" be different?

Carrie Brownstein: First and foremost when we were going into season three we were thinking about other shows and what drew us to those shows and kept us coming back. We realized that it was character and developing some type of relationship with a character.

We realized that we had only introduced characters in the first two seasons, but hadn't really explored who they were or that much about their lives or their relationship to the city. We really started focusing on the characters in the third season so there will be a deeper exploration of the people on the show. I think that definitely makes for a richer and more intriguing season. It feels like a more fully actualized show to me now.

CNN: Since the series has been so character-driven, have there ever been any characters that you tried but had to abandon?

Brownstein: There have been plenty of one-off characters that haven't worked out, but I couldn't even name them now 'cause they are done. Any character that we have had a fondness for or feel like we can explore are the ones that come back.

CNN: Is it at all challenging having a show tied so closely to a specific locale? It's as if Portland is its own character in the show.

Brownstein: I agree. We've intentionally made Portland a character on the show.

I like the notion of place in any narrative. People's relationship to where they live, and the idea of an internal landscape that people possess has always been fascinating to me whether it's in fiction, song writing or in television. I love how "The Wire" and Baltimore are so intrinsically tied. I think that in terms of the narrative landscape, really having place be distinct helps define shows.

So it's not a challenge. I actually think it really grounds the show and provides a reality that we can spring off of.

CNN: The show has been very successful in luring a variety of stars to appear in cameo roles (several celebs including Jack White, Edward James Olmos, Selma Blair, Gus Van Sant and Sarah McLachlan have had bit parts). Who are your dream folks that you haven't had on the show yet who you would love to see appear?

Brownstein: A couple years in a row we've tried to get Cate Blanchett, which is crazy. Werner Herzog, the director, we have tried to get on the show. There is always this pie in the sky list, but each and every time I feel happier and luckier with the guest stars that we do get, so I would consider them dream casting as well.

At the beginning of the year you think you are going to end up with every Oscar-winning actor or actress and that's not usually the case.

Brownstein: She's just so enigmatic. When I think of the film "I'm Not There" where she plays Bob Dylan, she just has this kind of boldness about her and she's very interesting. We always kind of want her for a slightly malevolent type of role. She's just a great actress, and we would love to work with her.

Brownstein: You know, we asked him to be on the show. A lot of times people want to do it, but it's scheduling issues and such. People are very gracious in declining.

CNN: How long do you envision "Portlandia" going on, because fans would like for it to be on forever.

Brownstein: Ha! You say that now, but I don't think it's true.

I feel like shows have a time and place. I'd like to think of it as coming to existence, hopefully being something that people are drawn to and feel a connection to and then kind of leaving before we wear out our welcome. Ideally I think five seasons would be the perfect amount of time "Portlandia" should exist in the world. That's not to be self-defeating; it just feels like we can tell a story and get to the places we want to get to in terms of writing in that amount of time.

But you never know whether we are getting another [season] or not, so maybe it will be three.

CNN: You and Fred [Armisen] recently voiced the characters of Terrance and Emily, a couple from the Pacific Northwest who settle in Springfield on "The Simpsons." Do you feel like you guys are kind of locked into the hipster method of acting?

Brownstein: Hopefully not. I'm not even sure what that is, but I like your description of it that way.

I just think that "The Simpsons" had that episode percolating for awhile, but I don't think we are limited to just that. There was certainly some crossover between "The Simpsons" and "Portlandia" that seemed natural.