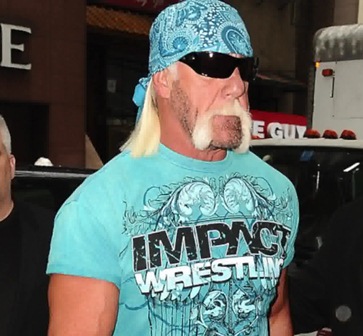 (CNN) -- Sex tapes are occasionally a boon for celebrities, but for Hulk Hogan, last week's leak of an illicit video starring him was an embarrassment.

Speaking Tuesday to Piers Morgan about the leaked footage on "Piers Morgan Tonight," Hogan called the tape "the big white elephant in the room we can't avoid."

"I've been through a lot of stuff, with the federal government back in the '80s, the whole steroid controversy, the divorce, the car wrecks," Hogan recounted. "I've been through so much stuff, but never have I ever been this embarrassed, and never has my world been turned upside down in such a fashion."

Last Thursday, Gawker posted a minute-long clip from the tape, which Hogan has said is of him and the estranged wife of a friend, radio personality Bubba the Love Sponge.

Hogan's rendezvous, which he said was filmed without his knowledge, is at least six years old and occurred while his earlier marriage to Linda Hogan was in a rough spot, the famed wrestler told Howard Stern on Tuesday.

"I considered both people close friends. There was ongoing dialogue for over two years about this (kind of thing), and I said, 'give me a break, stop, you're joking' -- it was almost to a point of being funny," Hogan said, via TMZ. "And then I bottomed out, and my personal life, I was in a bad situation. ... I knew my marriage (to Linda) was really screwed up bad."

Tuesday on "Today," Hogan told Kathie Lee Gifford and Hoda Kotb that he "had no idea there was a camera in the room."

"It was at a really low point in my life when I was in my previous marriage, when things bottomed out completely," he reiterated. "I was with some friends, I made a wrong choice, and now all of a sudden it surfaces over six years later."

"I'm trying to find out who did this to me," Hogan went on, adding that new wife Jennifer McDaniel, whom he married in 2010, "is rattled, to say the least."

As far as how he's dealing with it, Hogan told Piers Morgan Tuesday that he's focused on accountability, because "any excuse I make, whether it was a rough time in my life, or the people that were there were my friends, none of that matters."

"At the end of the day," he continued, "pray to God that those that love you and the people close to you, like your friends ... your children, and your wife, know who you are."