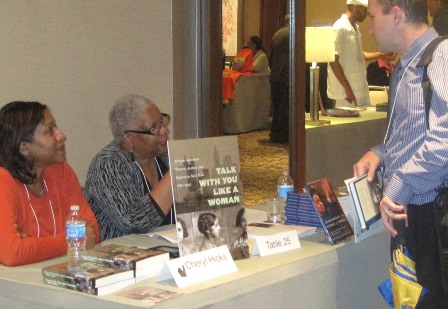 First there was Bill.  He drove us in his taxi from the Pittsburgh airport and welcomed us with a generous spirit to a new experience: The 97th meeting of the Association for the Study of African American Life and History.  It was my first visit to this conference, but ASALH has been with us for almost a century. Based in Washington, D.C., and founded by the eminent historian, Carter G. Woodson in the mid-1920s, ASALH brought us Black History Month and a consistent forum for community-based and scholarly research.   The celebration that will come with ASALH's centennial is something to be celebrated far and wide.   What better time than now to plan for an Oregon presence at this important marker in our history?

I attended this meeting to participate in an author's signing event for my book, published last year, "Remembering the Power of Words."  My book was especially welcomed  because the theme of the meeting was "Black Women in American Culture and History."   My co-author, Patricia Schechter, and I were just one pair among 62 authors of books whose titles and stories I found stirring, like that of Shirley Sherrod, "The Courage to Hope: How I Stood up to the Politics of Fear" and of Michelle Duster, great-grand daughter of the freedom fighter Ida B. Wells-Barnett, who has put together books for young people called "Ida in her Own Words." Michelle is leading an effort to build a monument to the memory of Ida B. Wells-Barnett. This monument is of special importance since the housing project in Chicago built in 1941 that bore her name is now closed.  Michelle has raised $50,000 of a projected $300,000 to build a fitting artistic monument to her great-grandmother, information about which is available at www.idabwellsmonument.org .


Everything about this meeting was both historic and personal; in that connection was its power. I was able to greet Sonia Sanchez and tell her personally how much I loved her.  I thanked her for being on the PSU campus in the early 70s, reading her poetry, and again in the early 1980s, when she addressed the National Black United Front Convention which met in Portland at Vancouver Avenue Baptist Church.   I also was able to personally thank another of my she-roes, Paula Giddings, at a lunch Patricia arranged for the three of us. Paula Giddings wrote the acclaimed book, "When and Where I Enter: The Impact of Black Women on Race and Sex in America," back in 1984, a book that I and so many others read avidly and have treasured for many years.  By way of thanks, I gave her a copy of my own book.  I attended a very special commemorative panel put together by the Association of Black Women Historians which honored the "Founders of the Field," who started the organization 33 years ago in 1979.  Rosalyn Terborg-Penn, emeritus Professor History of Morgan State University, warmly greeted Patricia and me. We had met earlier this year in Berkeley, Ca., at another history conference and we all delighted in the momentum of our learning and sharing now renewed at ASALH.  Terborg-Penn and her colleague Darlene Clark Hine of Northwestern University, are the co-editors of the Encyclopedia of Black Women in America, now in its second edition.   At this session, a special memory of my educational experience at Harvard back in the 90s with Judge A. Leon Higginbotham, Jr., was evoked by the remarks of his widow, the accomplished Harvard historian Evelyn Brooks Higginbotham.  She told her audience a story about discovering the archive that went into her book about Nannie Helen Burroughs and the women of the Black Baptist church. Higginbotham more or less bumped into all the boxes stored in Burroughs' school, still operating in Washington D.C., when she was a young graduate student at Howard University in the early 1980s.  Her story underscored the importance of talking to community elders, preserving our documentation, and sharing our stories.  Each expert, scholar, and artist at the sessions that I attended talked about black women who answered the call to activism with an enduring passion for justice. 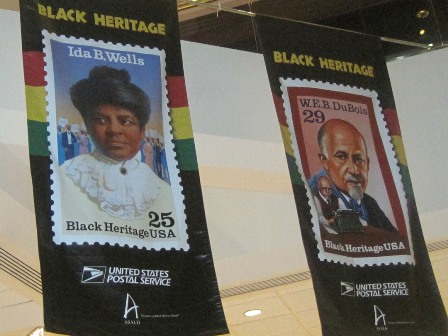 At a panel on "The Importance of Having African American Archivists Process the Collections of African Americans," a number of things stood out for me.  First, the presentations affirmed and confirmed that the work we are doing to preserve our history in Oregon is of vital importance.  We are accomplishing this work in the Oregon Black Pioneers organization, based in Salem, at the Portland State University Library, where the Rutherford (and Gordly) papers reside, and at Oregon Historical Society, which hosted Vancouver Avenue Baptist Church's exhibit in 2009 and will soon open a new display on Black Pullman Porters in the Pacific Northwest.   October is national "Archives Month," the theme of which this year is "The Power of Collaboration." How fitting that African American history is moving forward in exactly such ways in our community.  And how important it is that we continue to expand this work and bring as many people across generations and neighborhoods together to do it.  The exhibit "Say We Are Here: Culture, Community and Activism across Four Generations of Black Oregonians," drawn from the Verdell A. Burdine and Otto G. Rutherford Family Collection, opened on Sept. 24, and will run through December at PSU's Library.  A special celebration and panel discussion will be held on Nov. 8 at 5:30 pm.  You are warmly invited to these events.  Bring a friend. Bring a neighbor. Bring a family member, old or young, and get involved.  It is an amazing journey from the past into the future, through our shared present.

At the end of our weekend in Pittsburgh, there was Bill, again.  He had given us his card when he dropped us off at the hotel and invited us to call him when the conference was over.  During that first drive across the city that he knew so well, Bill spoke with special love of his eight children and eight grandchildren.  "I can catch all my kids!" he proudly told us, as he regaled us with little snapshots of himself, their "Pap-Pap," enjoying everything from swimming, to bicycling, to skateboarding with his kids.  "It doesn't matter if I fall down a lot or even just stand around and watch them," he noted, "they just want me there."  Bill's devotion and genuine presence with his family struck me.  I  was touched when he brought his wife and one daughter with him to see us off at the end of the weekend.  "Now you know my heart," he said as we hugged good bye.