Viola Davis: The 'Won't Back Down' Interview 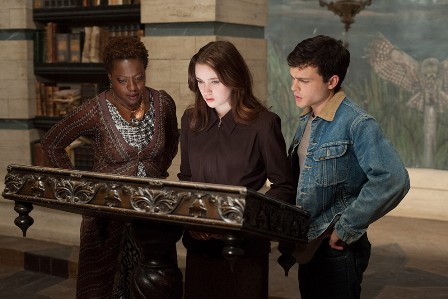 Viola Davis was born on Aug. 11, 1965, on her grandmother's farm in St. Matthews, S. C., but raised by her parents in Central Falls, R.I..  After earning a degree in theater from Rhode Island College in 1988, she went on to do post-graduate work at the prestigious Juilliard School prior to embarking on a critically-acclaimed professional career.

Ms. Davis made a memorable mark on Broadway, winning Tonys for stellar performances as Tonya in "King Hedley II" and as Rose in the revival of "Fences." She's also been nominated twice for an Academy Award, for her powerful portrayal of stoic Aibileen in "The Help" and for her equally-sterling interpretation of Mrs. Miller in "Doubt."

Here, she talks about her new film, "Won't Back Down," a female empowerment saga, where she plays Nona Alberts, a jaded teacher who joins forces with a frustrated single-mom (Maggie Gyllenhaal) to turn around an underperforming public school.

Kam Williams: Hi Viola, thanks for the interview.

KW: Music teacher Steve Kramer asks: What interested you in "Won't Back Down?"

VD: My interests in the film were two-fold: the backdrop of education and also the human story within it about a woman who, when she was in her twenties, had all these high ideals and hopes of taking the world by storm as a great teacher and also as a great mother. But all of that was just blown to bits, and we find her at a low point where she's totally disillusioned. For me, the movie is about her story of coming back to life again. And that journey is a very human one. It intrigued me, and I saw it as a very interesting challenge as an actor.

KW: What was it like working with such a top-flight cast: You had an Academy-Award-winner Holly Hunter, as well fellow Oscar-nominees Maggie Gyllenhaal and Rosie Perez?

VD: You forgot another Oscar-nominee, Marianne Jean-Baptiste. It was fabulous! To me, it's always a luxury to be able to work with the best of the best because they make it easier for you to do what you do. It's harder to work with people who are not as dedicated to their craft. It also leaves you a better actor when you finish the project, since you always feel like you've learned something. And it's refreshing to spend time with actors who are so vocal, so articulate. "You get more material to steal from." That's what I always say. [LOL]

KW: Editor/Legist Patricia Turnier would like to know whether you had any problems with any of your lines in the script, and how you handle such a controversy.

VD: Yes, I did have a problem with a few things, which is good for an actor. The average person might not see it that way. The sentiment that I had a little trouble with was the idea that, "You change the school, you change the community." I couldn't wrap my mind around that. I just feel that those two trains need to be leaving the station at the same time. I think that that's a heck of a responsibility to expect schools and teachers to change these challenged communities. Many of them are experiencing growth deficits or are going bankrupt, and are infected with gang violence with as many as 85 percent of the people living below the poverty line. I knew this was going to be a hotbed issue, but I didn't realize how volatile it was going to become once the movie was released. Nevertheless, I welcome this spirited discourse. That's always been a spearhead to change.

KW: Is the big brouhaha due to allegations that the picture is anti-union?

VD: Yes, that is what the controversy's about. I don't think the film's anti-union. I feel it's pro-education. The teacher, in the end, becomes the hero. The teacher! Oscar Isaac's character [Michael Perry] says in the film that the one of the things he remembers about the high school teacher who inspired him to become a teacher was how the union had stepped in and saved the man's job when the system was failing him. So, I don't feel it's anti-union. I consider it pro-activist.

KW: Larry Greenberg was wondering what would you say is the movie's message?

VD: The movie really emphasizes that we're all in the position to be the change that we want to see in this country. And I think there's no better time to bring that message home. What's interesting is that that theme is a common thread in the film, even in terms of the two main characters' taking control of their own personal lives. At the end of the day, nobody can tell you how to tackle failure or how to handle change. The world is very good at encouraging you to go along with the status quo and at basking in your successes. But when you hit a wall in your personal life, and you screw up, people don't give you a chance to navigate your way through it and tap into what's extraordinary about you. I think this movie tackles that subject in a beautiful way, and I think it's the best message you could give to a child. And, hey, you can even bring your kids to the film because it's rated PG. [Laughs]

KW: Harriet Pakula-Teweles says: "Won't Back Down" is not only the title of your new film, but that same sort of spirit was also part of your character's persona in "The Help." How much of that strength we see up on the screen is you and how much of it is great acting?

VD: [Chuckles] Well, I'd like to say that it's all great acting. That's what I'd prefer to say, but I suppose I do have that same quality in real life. I guess they say, "Necessity is the mother of invention" because you have two stark choices when you find yourself in a really desperate situation. You can either fold and cave-in to it or you can become really passionate about getting out of it. When you're really passionate, you're going to grab hold of every rope you see, and wrap them around your arms and legs to claw your way out. And that's the way I've felt in my life.

KW: Harriet has another question: Is there a classic film you'd like to star in the remake of?

VD: You know what? Playing Norma Rae would be great, too, although I don't whether that would work. I'd also like to play Harriet Tubman.

KW: Patricia is also wondering whether there's any truth to the rumor that you'll be playing Barbara Jordan in an upcoming biopic about the late congresswoman.

VD: Yes, my husband [Julius Tennon] and I started a production company out of necessity, the need for great narratives for actors of color, and we are currently developing that script with some great producers.

KW: Kate Newell says: I loved your performance. Did you have a teacher who especially inspired you?

VD: I had several teachers who inspired me, in both the public school system and the Upward Bound program. I needed several, because I lived in such abject poverty and dysfunction. And they're still in my life today, because I consider them to be friends, actually.

KW: Thanks again for the time, Viola, and best of luck with Won't Back Down.