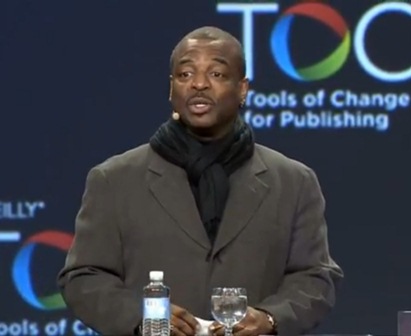 OK, yes, I just wanted to use those words in an article - but chances are, if you're a geek like me, you know that saying by heart.

And for a generation of "Star Trek" fans (pun intended), watching LeVar Burton fix a warp core every week on TV might have even inspired you to get into the field of engineering or physics and dream of one day working at NASA.

Widely known in the sci-fi community as Lt. Cmdr. Geordi La Forge on the Enterprise of "Star Trek: The Next Generation" in the 1980s and '90s, Burton has also cemented his place in television history by teaching countless children to read as the host of "Reading Rainbow," not to mention his breakout role as Kunta Kinte in 1977's "Roots."

With such a varied career, his fan base is certainly diverse.

"There's a whole new generation of 'Roots' fans who had never seen it before. ... 'Star Trek' fans are out there," Burton said. "But I gotta say, the 'Reading Rainbow' fans, it's like an army, they're a legion."

When an iReporter asked whether Burton ever thought of becoming a teacher, the actor noted that "education is the family business. My mother was a teacher. My older sister is a teacher. ... It's what we do in my family." Although he went down a different road, Burton said, he feels well-suited to what he does.

"It is an amazing and remarkable feeling for the son of an English teacher to ... really have been a part of an effort that ... cemented a level of literature using the medium of TV for a lot of years," he said.

With everything he's done, if there was one scene that stayed with him the most, it was the whipping scene in "Roots."

"When they cut (Kunta) down and Fiddler is bathing his wounds ... (and) reassures him that his name is indeed Kunta no matter what anybody says and that there will be another day, that line (Louis Gossett Jr.) ad-libbed, 'There's gonna be another day,' that stands out in my mind as one of the most powerful moments certainly in, you know, in my career, but I also think it's one of the most powerful moments in television history," he said.

Burton is certainly busy these days, with "Reading Rainbow" returning for a digital generation as an app, and he's learning the dynamics of becoming an entrepreneur and building a sustainable business.

"I'm really, really happy and excited about what I'm doing now and what the future holds because, by the grace of God, apparently we get to keep doing this for a whole other generation of human beings, and I'm grateful," he said.

And, as any Trekker would attest to, this last question had to be asked: Would he ever reprise Geordi if he got the call?

"I love Geordi La Forge, and I love playing Geordi La Forge, but I would want to have that experience with all of my friends," the actor said, "For a lot of fans, the work that we did for all of those years on the Enterprise was our gift to them. But our gift, what we got (from it), was we got our friendships (and) the love that we have. So I wouldn't want to do Geordi without my friends."