By The Skanner News
Published: 07 December 2011

Do you sometimes wonder what your role should be in service to the community? We are often blind to the part we already play. Nichelle Nichols wasn't aware about her impact on African American television viewers during the turbulent time of the civil rights movement. 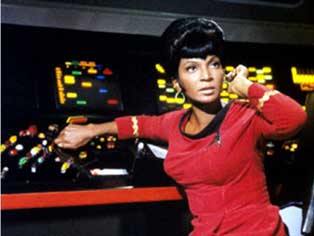 Nichols played Lt. Uhura on "Star Trek" but thought of it as merely a stepping stone to Broadway. Near the end of the first season she told Gene Roddenberry, creator of "Star Trek," that she was planning to quit. But at a NAACP event that weekend she was told that someone there really wanted to meet her. She turned to see the beatific face of Dr. Martin Luther King walking towards her with a sparkle in his eye. He took her hand and thanked her for meeting him. "Yes, Miss Nichols, I am your greatest fan," he said. All she remembers is her mouth opening and shutting worldlessly.

The story is part of a documentary,  "Trek Nation," that is being shown on the Science Channel throughout December 2011.

"He told me what my role meant, not just to 'Star Trek,' but for people all over the world. When I could finally catch my breath after hearing so many accolades from a man I considered as my 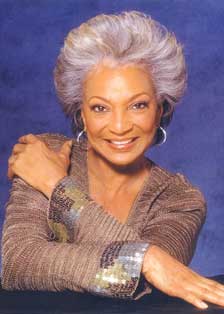 leader, I thanked him and then told him I was leaving the series and told him how I'd miss it all. He asked what I was talking about: 'No! You are our image of where we're going, you're 300 years from now, and that means that's where we are and it takes place now. Keep doing what you're doing, you are our inspiration. Besides, 'Star Trek' is the only show that my wife, Coretta, and I will allow our little children to stay up late and watch. You are their hero.'"

Nichols continues: "He said, 'You have the first non-stereotypical role in television. It's not a maid's role, it's not a menial role. Besides you're fourth in command.  This is something that is the reason we are walking, we are marching.'" He explained that she was a vital role model for young black women in America, and that her calling was to be of service to the community in this way. He talked a long time about what it all meant and what images on television tell us about ourselves.

When Nichols told Roddenberry what had happened, and that she was staying, he replied, "God bless Dr. Martin Luther King. Somebody knows what I'm trying to achieve here.' And a big tear came down his face. And Gene was not a man to cry.'" Needless to say, Nichols stayed with the show.

It may be the most important thing that happened in her life: it changed and defined her career. She knows there's some of Martin Luther King Jr.'s vision in "Star Trek." "Subsequently Gene and I would speak about it, and he invoked Martin Luther King after getting his star on the walk of fame," she said.

Following Star Trek's cancellation in 1969 Nichols appeared in the first six Star Trek movies and also provided her voice for the animated series 1974-75. She inspired others: Whoopi Goldberg has cited her influence.

Thanks for the help of  Wikipedia Uhura and the Startreck Database