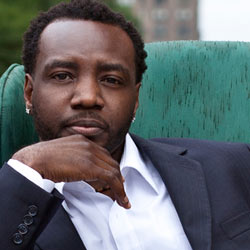 With an MFA from NYU's Tisch School of the Arts, Alrick Brown is a filmmaker and teacher who has found his calling writing, directing and producing narrative films and documentaries focusing on social issues affecting the world at large. For over two years, he served as a Peace Corps volunteer in Cote d'Ivoire.

Alrick's interactions with the indigenous people in the village where he lived, as well as his overall experiences in West Africa, have informed his creative expression, an expression first fostered by his birth in Kingston, Jamaica, and his upbringing in Plainfield, New Jersey. A fluent French speaker, he graduated from Rutgers University with a BA in English and a Masters degree in Education.

Since then, he has devoted his energy to changing the world by giving a voice to the voiceless by telling stories that otherwise would not be told. Alrick's collective work has been screened in countless film festivals, and received numerous awards, including HBO's Life through Your Lens Emerging Filmmaker Award for the critically-acclaimed documentary Death of Two Sons.

In 2004 he was one of four NYU students featured in the IFC Documentary series Film School, produced by Academy Award-nominee Nannette Burstein. And in 2007, he addressed the Motion Picture Association of America on C-SPAN. Here, he talks about his new film, Kinyarwanda, which won the Audience Award in the World Cinema category at the Sundance Film Festival earlier this year.

Kam Williams: Hey Alrick, thanks for the time. Do you remember ever meeting me?

Alrick Brown: I do recognize your name. Where'd we meet?

KW: It was in Princeton, New Jersey a few years ago when you were working on your film school classmate Sean Welski's student film.

AB: Oh my goodness! [Laughs] Cool, man! I kept asking myself: Why is this name so familiar?

KW: Well, it certainly looks like things have taken off for you since Kinyarwanda won the Audience Award at Sundance. How does that feel?

AB: It's all an illusion. I'm still broke, man. I'll answer that question, when I get out of debt.

KW: When did you get your degree from NYU?

AB: I officially graduated in 2008, when I turned in my thesis.

KW: Well, I really enjoyed Kinyarwanda. What inspired you to make a movie about the genocide in Rwanda?

AB: Thank you very much. The film came about because one of my Peace Corps buddies ended up in Rwanda after I left West Africa to go to NYU. He introduced me to Ishmael Ntihabose, a genocide survivor and aspiring filmmaker. Ishmael called me because he got a grant to make a movie about the Muslim influence on the peace process in Rwanda, which I hadn't heard about before. So, he's the picture's executive producer. Then, when I arrived in Rwanda, I heard so many amazing stories of survival that I suggested to Ishmael the idea of an ensemble drama with intertwining tales, ala Crash, but with all the characters eventually meeting at a mosque. He went for it, and we shot it in 16 days.

KW: Had many of your cast members been touched by the genocide?

AB: Absolutely! Most of our crew and cast members were affected by it in some way. That added to the picture's authenticity.

KW: What's Rwanda like now? Is there still evidence of tensions between the Hutus and Tutsis?

AB: The country has turned itself around 180 degrees. In fact, the terms "Hutus" and "Tutsis" aren't even used anymore. That's not to say everything is perfect. Outside of Rwanda, there are still some people in exile who don't believe in the reconciliation process who still hold animosities.

KW: I was surprised to learn from the movie that there are also Pygmies in Rwanda. What % of the population is comprised of the Twa people?

AB: Many people converted to Islam after seeing the good things the Muslims did during the conflict, because they felt that the church had let them down.

KW: Did Rwanda hold truth and reconciliation hearing like they did in South Africa after Apartheid?

AB: Yes, they had truth and reconciliation hearings, as well as re-education programs for the perpetrators. And the country implemented a new vision of itself via songs of unity and forgiveness.

KW: I was surprised to see guns in the movie. I thought all the killing had been done with machetes.

AB: No, soldiers and a lot of the more powerful guerilla leaders had guns, although most of the common people wielded machetes.

KW: How did you figure out a way to humanize so many characters, especially in a story unfolding in the midst of a massacre?

AB: I know a very personal Africa, that isn't National Geographic. So, as a filmmaker, I was determined to show the truth that I know that we rarely get to see. I knew that my foundation was going to be the intimacy of people's lives.

KW: What made you want to join the Peace Corps and venture to Africa in the first place?

AB: Believe it or not, I saw an episode of The X-Files in which they found a UFO that had landed in the Ivory Coast. I saw that as a sign. And I also wanted an opportunity to travel and see the world.

AB: Yeah, how much money do you need for your next film? [LOL]

KW: How much do you need?

AB: Probably about $3 million. Hopefully, Kinyarwanda will show people what I'm capable of doing on a small budget.

AB: I don't think I'm ever afraid, but I doubt myself often. Because of that doubt, I constantly strive to make myself better.

AB: That's a good question, Kam. I'm proud, but I'm not happy, because the debt is stifling, the work is intense, I miss my family tremendously, and I don't have anyone to share this journey with. Sometimes, I feel very alone.

AB: [Chuckles] About a half-hour ago. I'm trying to enjoy this journey as much as I can.

AB: [LOL] I have a lot of those, man. Sex… Haagen Dazs strawberry ice cream… people watching… and writing a good scene. I can stay high for weeks after writing something that I love.

KW: The music maven Heather Covington question: What was the last song you heard?

AB: A song called The Waitress by a folksinger named Jonathan Bird.

AB: My lobster bisque and my seafood bisque are both pretty badass.

AB: I do look in the mirror frequently. But I look past the physical and I feel proud of what I see, because I know where my heart is and the struggles I've been through to be able to stand where I'm standing.

AB: If I answered that question it would be a lie, because I couldn't tell you the truth.

AB: Waking up from a nightmare at about 2 or 3 years of age in Jamaica, and hearing a woman screaming outside of the house.

AB: Persistence and discipline. Without those two, you have nothing, no matter how talented you are.

KW: Dante Lee, author of "Black Business Secrets, asks: What was the best business decision you ever made, and what was the worst?

AB: Storytelling. Nothing gets me more juiced up than having an impact on people.

AB: I want people to know that I tried.

KW: Thanks again, Alrick, and best of luck with Kinyarwanda.

AB: Thank you so much, Kam, I really appreciate it.

See a trailer for Kinyarwanda