By Kam Williams Special to The Skanner News
Published: 02 November 2011 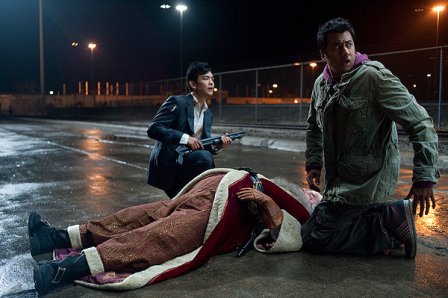 Born Kalpen Suresh Modi in Montclair, New Jersey on April 23, 1977, Kal Penn graduated from the Freehold Regional High School District's Performing Arts High School, attended the Governor's School for the Arts, and received a degree from the prestigious School of Theater, Film and Television at UCLA. He recently returned to acting after a two-year sabbatical during which he served as an Associate Director of the White House Office of Public Engagement.

During his tenure with the Obama Administration, Kal served in a variety of roles, including that of the President's Liaison to the Arts Communities, Young Americans, and Asian Americans & Pacific Islanders. He has been an Adjunct Professor of Cinema, Sociology and Asian American Studies at the University of Pennsylvania, too, and is currently pursuing a Graduate Certificate in International Security at Stanford University.

Kal is currently reprising the role of Kumar he made popular in "Harold & Kumar Go to White Castle" and its follow-up "Harold & Kumar Escape from Guantanamo Bay." His other notable feature film credits include Mira Nair's film "The Namesake," based on the best-selling novel by Pulitzer Prize-winner Jhumpa Lahiri; "Van Wilder" and its sequel, "The Rise of Taj"; "A Lot Like Love" and "Superman Returns."

In terms of TV, Penn is widely recognized for his role as Dr. Lawrence Kutner on the critically-acclaimed series "House," although he also appeared regularly on season six of "24" and guest-starred on the hit series "Law & Order: SVU." And earlier this year he joined the cast of "How I Met Your Mother" as a therapist-turned-boyfriend.

Here, he talks both about acting and about taking a break from his career to work for President Obama an associate director in the White House Office of Public Engagement.

Kam Williams: Hi Kal, thanks so much for the time.

KW:Fine, thanks. Since I'm from Princeton, I was wondering whether you still have any connections to New Jersey.

KP: Oh, are you really? Yes I do. My folks are in Jersey. And I have a lot of friends and other family there. So, I try to visit as much as possible.

KW: I'd like to get right to readers' questions, because I have a lot of ground to cover, between your acting career and your work in the Obama Administration. Kristopher Seals asks: What do you enjoy most about making a "Harold & Kumar" movie, and are you ever confused by fans with your iconic character, Kumar?

KP: [Laughs] Sometimes, I am confused with him. It sort of depends on who is approaching me. I would really say my favorite thing about making another "Harold & Kumar" is coming back and working with old friends again: John Cho… Neil Patrick Harris… and Jon [Hurwitz] and Hayden [Schlossberg], the guys who wrote all three films.

KW: Lisa Loving says: There is undeniably a subtle thread of politics running through "Harold and Kumar Escape from Guantanamo," one of my favorite movies of all time. How have your politics impacted your acting career?

KP: Hopefully, they haven't at all. I like to keep them very separate. In fact, I would disagree with Lisa in that I don't think Guantanamo Bay was political at all. At least that wasn't the intention. The aim was just to make people laugh, Democrats, Republicans, and everyone in between. We just hope everybody has a good time.

KW: Judyth Piazza would like to know: What is the most important lesson you learned from working in the White House?

KW: Yale grad Tommy Russell asks: How much freedom did you have to implement your own ideas while working in the Obama Administration?

KP: The point of serving your country is not to do your own thing or to go rogue, but to work as part of the process. Having a chance to work on President Obama's agenda was really remarkable, especially when it came to things like access to education, increasing Pell Grants and bringing folks home from Iraq. Those were the sort of things I was working on, and I was very happy to contribute in that way.

KW: Tommy has a follow-up: What would be your dream role?

KW: Mirah Riben asks: Have you seen The Ides of March, and if so, how close was the movie to your experience working on the 2008 presidential campaign?

KW: Mirah also asks: Has President Obama measured up to your expectations and hopes for the country?

KP: He has exceeded my expectations.

KP: The media are mostly interested in generating ad revenue, so they focus on the more divisive and more titillating stories. But the reality is that, behind the scenes, I've watched the President fight day-in and day-out for the things that matter to most folks, like jobs, education reform, the needs of returning war veterans, investment capital for entrepreneurs, support for Historically-Black Colleges and Universities, etcetera. That's been my experience. He's had some huge successes with much of that agenda, but it's rarely, if ever, mentioned in the mainstream news. So, I'm actually very proud of the work that he's done so far, and I believe that he's going to achieve a lot more, if we elect him to a second term.

KW: What do you think about Occupy Wall Street?

KP: I feel that the sentiment is something that many of us agree with, and I'm looking forward to seeing what the "asks" are from the good folks that are down there.

KW: Wesley Derbyshire was wondering whether you now see any parallels between acting and politics?

KP: They're totally different. You can't really compare the two. Each is challenging in its own way.

KW: Patricia also wants to know, whether you'd accept an offer to play the lead role of Jawaharlal Nehru in a movie?

KP: I guess it depends on the movie.

KW: Teresa Emerson says: Do you see yourself ever running for political office someday?

KP: I don't have any plans to run for office. What I love about L.A. and Washington, D.C. is that they're almost the opposite of each other. L.A. is a very creative space while D.C. is a very cerebral space. So, they're the ying and the yang in my world. I like them both for their own reasons.

KW: Harriet Pakula Teweles asks:How did acting prepare you for working in the Obama Administration and how did that prepare you to return to acting? In other words, how different is representing and presenting?

KP: The two are completely different. What prepared me for working in the White House were my graduate program in International Security and my time spent teaching at the University of Pennsylvania. They didn't have much to do with acting, per se.

KW: Kevin also asks: Why do you think the Harold & Kumar franchise has been so successful?

KP: Because of the fans. I think everyone loves to laugh. The characters are good-natured and have a positive outlook on life. So much comedy nowadays is cynical and based on cutting other people down. What I love about the "Harold & Kumar" movies is that they are more about raising people up. I think the audience appreciates that.

KP: [LOL] That sounds like a lot of fun, Larry.

KW: Aleesha Houston asks: When was the last time you treated yourself to a day off just to pamper yourself?

KP: I don't really do that. When I'm able to take a day off, I'll spend it with friends and family, or maybe hiking or something like that.

KP: "The Heart and the Fist" by Eric Greitens.

KW:The music maven Heather Covington question: What was the last song you listened to?

KW: Thanks again for the interview, Kal, and best of luck with both "Harold & Kumar" and with working with President Obama.

KP: Thank you very much, Kam, and good to talk to you.