12 Things You Don't Know About @yagirlriss 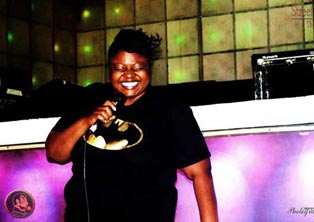 Born and raised in Portland, Oregon, Rissa Riss is a professional comedian based in Los Vegas. Her career has taken her all across the Northwest as well as to LA, Austin Houston and Dallas. Here are 12 things most people don't know about Rissa.

1. She doesn't know where her career will take her next. But she does know she's going to enjoy the trip.
"I love traveling and being constantly on the move," Rissa says. "And I love meeting people. The awesome thing about comedy is that you meet people all the time." You might be backstage with Chris Rock and of course you're waiting for him to say 'Hey I'm going on a tour and I want you to come and host.' But it takes a few years. I'm gritting and grinding."

2. Her first gig was an open mic at Roscoe's on Southeast Stark St. off 82nd Avenue in Portland. Shout-out to the Montavilla neighborhood!
Riss had a bad day, she says, so she started blowing off steam.
"I just kind of ripped on my day; it was a tragic, tragic day and that crowd just laughed. I could hardly believe they were laughing like that."

3. Rissa's comedy mentor is Andre Paradise. Introduced to Paradise by inventor Georgio Johnson of Nyxio, Riss credits Paradise for her professional foundation. Paradise brought Rissa into the comedy touring circuit and challenged her to become a true professional, she says.
"He is so influential to the life I have now. He taught me about choices and about sacrifice—how to sacrifice the life you live for the life you want to live.
"He has an awesome, awesome training in comedy…And he let me open for him."

4. Rissa was expelled from Humboldt Elementary in third grade, for dissing the school's principal. "I wrote on the bathroom wall that she was a big fat pig," Riss says. "OMG That's horrible for a third-grader."
Humboldt wasn't all bad for Rissa. "I was on the drill team in 1st and 2nd grade," she remembers. "We were the Humboldt Firefoxes."

5. In 4th and 5th grade, at Woodlawn Elementary, Rissa was in the same class as vocalist Nehemiah Booker. "That was the coolest class," Rissa says. Nehemiah would sing at all of our assemblies. He'd sing a Gospel song called 'Tomorrow.' We thought he was the greatest R&B singer alive."
Also in that class was Anthony Branch, who later took the street name Lil' Smurf and was shot dead in a parking lot in North Portland. "Some people get breaks, some don't," she says.

6. She lives in Las Vegas. It's a good place to be a comic, she says. "It has so many things all packed into this small space," she says. "It's close to LA and it's closer to Portland than Dallas, Austin or Houston. But comedy is the same no matter where you go."

8. She gives back. Rissa helped fellow comic, Carmen Trineece Anderson get started in comedy. Anderson is a single mom dealing with late-stage cancer, Riss says.
"This woman is on chemo yet she is still striving to live her dream.
"I can't complain about anything, I can't say I stubbed my toe. I have to pull a Carmen. It's the new Malcolm X: 'by any means necessary.' She inspires me.
"I don't care if my mom died, my man left me, I got my leg cut off. I have to do this show."

9. Rissa studied African dance. 'At Woodlawn everyone took African dance," she says. "That class taught us so much about our culture and about discipline. It gave us an opportunity to see our fellow students perform. It gives a person hope and the idea that you can do something. It really instills in you a confidence that may not be instilled in everyone.
"My teacher also taught us Algebra and French. She was awesome and she did not take any crap. If you misbehaved, she'd say 'I'm sending you to Africa', and you'd have to go out the door. People didn't act up because they didn't want to get sent to Africa."

10. She's shy. "I always hated any recognition or awards. Don't bring attention to me unless I'm on stage."

11. She's trying to clean up her act. "I just did a show where I did not use the F-Bomb, not even once," she says. That takes practice!"

12. A wide-screen TV once fell on her face. Rissa and her bff were moving the giant television up a flight of stairs and, "It literally fell on my face. It broke my eye. I said OMG is my eye falling out?"
With a bruise the size of Gresham over one eye, Rissa was going to cancel her show, in Cornelius, Ore., but Andre Paradise persuaded her to go on. So she put a bandana over her eye and did the show, making the story of her injury part of the act.
After the show, she says:
"This guy stopped me – he was soooo drunk. He puts his hand on my shoulder and looked at me, and was so serious and so dramatic. And he said, 'You don't have to be in a relationship like this.'"
That broke me up. It was so funny because in all his drunkenness he was trying to take care of me. It made my day."

You can book Rissa Riss through Joyce Olivo Boss of GoodTymez Entertainment: 971 313 1116