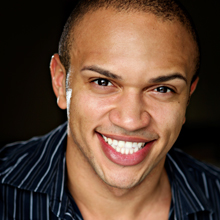 Continuing its string of family-friendly musical productions, Fred Meyer Best of Broadway brings "Shrek: The Musical" to the Keller Auditorium in downtown Portland starting Sept. 13. Built around a tight cast of ogres, royals, storybook figures – and one hilarious donkey – the show wowed New York audiences with its elaborate sets and costumes, its music and its engaging characters. We spoke with the multi-talented Andre Jordan, newly cast as Donkey, about his career, his life goals, and what makes this show so much fun. Find out how to get tickets here.

The Skanner News: Tell me about yourself. What have you done before this role?

Andre Jordan: Before this tour I was in school, I went to the American Musical Dramatic Academy and lived here in the city. Just last year I was in the national tour of "Legally Blonde," I played Carlos, the pool boy's boyfriend. I had a great time. I was in the original cast of "Toy Story: The Musical." "Rent," "Aida." I've been pretty busy for the past five years, since I started working.

TSN: What do you think about playing Donkey?

Jordan: I'm having a lot of fun doing it. It's Donkey; everyone loves Donkey -- no exception. Because Donkey is silly and naïve but he's funny and charming and everyone loves him. The best thing about Donkey is that he doesn't judge. I mean he takes everything at face value, right there for what it is. He doesn't come with any preconceived notions, he's not jaded, he's not bitter. And to be able to play that positivity throughout the show is a lot of fun, and I think that is what I would want people to take away from it. Don't be so serious all the time.

TSN: Where have you toured with this show so far?

Jordan: We've actually just been rehearsing, we're just finishing up about three weeks of work. We're flying to Yakima, Wash., where we'll tech the show, get it up on its feet with the scenery and everything and the costumes, and we open in Portland on Sept. 13.

TSN: What is it about this part that's so fun?

Jordan: The role is so – you can't help but think of Eddie Murphy. He is the original voice of it. That in itself is exciting because there is so much you can bring of your own to it. There's so much room for creativity and for fun and to challenge yourself. Because you have to do your own thing, and I think that's the part about it is making it my own, and I work with great people – Shrek (played by Lukas Poost) is a wonderful, phenomenal guy, he's a lot of fun to play with, and work off of.

TSN: What is your vision for your career? What would you like to do?

Jordan: Oh God, lots of stuff! I've been singing my whole life. I love dance, I love acting, I love doing it all together, so I do want to continue doing it for awhile. But I think it is important to do the best that you can and be a positive role model. I think that's one of the most important things, for kids to have strong role models, and that's what I want to do with myself. Take those necessary steps, do some community outreach like youths – I want to get to a place where I can give back, essentially.

Jordan: I am beyond happy to be doing this. The cast is a very talented, excited, exciting group of people, and I think that anyone that is going to come and see us is going to really enjoy themselves.