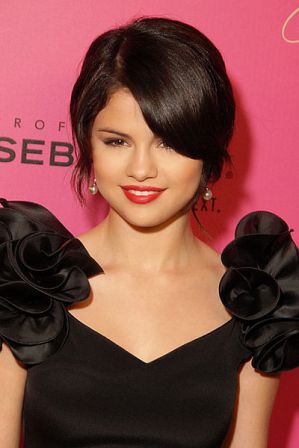 Selena Marie Gomez was born on July 22, 1992, in Grand Prairie, Texas, to Mandy Cornett and Ricardo Gomez, but raised mostly by her mom from the age of 5 on, following her parents' divorce. She made her debut on TV at 7 as Gianna on "Barney & Friends," and in film soon thereafter in "Spy Kids 3-D."

Since then, Selena appeared on such TV shows as "Walker, Texas Ranger," "The Suite Life of Zack and Cody," "Hannah Montana" and "The Suite Life on Deck," before skyrocketing to fame starring as Alex on the Disney Channel's  Emmy-winning sitcom, "Wizards of Waverly Place."

In 2008, the versatile teenager kickstarted her singing career when she recorded three songs for the soundtrack of her Disney film, "Another Cinderella Story." And she has gone on to make a dozen music videos and to record a variety of hit tunes, including duets with Miley Cyrus, The Jonas Brothers and Demi Lovato.

In 2009, she formed Selena Gomez and The Scene, a pop band which has released three albums, including "When the Sun Goes Down," just this past June. A single from the CD, "Who Says," has already gone platinum.

Although Selena has recently been romantically linked to fellow heartthrob Justin Bieber, the chaste chanteuse has taken a vow to remain a virgin until marriage. Here, she talks about the launch of her own clothing line, K-Mart's "Dream Out Loud" Fall Collection.

Kam Williams: Hi Selena, thanks for the interview.

KW: What interested you in launching your own fashion line?

SG: I really wanted something for my fans. Honestly that's where it all kinda started. A little girl had a picture of me, a paparazzi picture, and she went out and bought the same outfit I wore in the picture which was really sweet. So, I wanted to come up with a line that would be affordable, classic and also really a lot of fun for my fans.

KW: How would you describe the "Dream Out Loud" Fall Collection?

SG: Very almost preppy, with a back-to-school kinda feel. We have a lot of plaids. We have a really cute plaid skirt that I actually wore in one of the shoots with a little shirt you can wear over it with boots. It's pretty cool!

KW: What demographic was it designed for?

SG: It ranges for all ages. It's safe to say from 7 up to around my age.

KW: Which do you prefer, acting or singing?

SG: Ugh! I don't know. I love both for different reasons. I guess I would choose acting, if I had to pick one.

SG: Yes, it does. It is very hard to have. But it is very important to me.

SG: Yesterday. I saw Final Destination 5 and this lady in front of me was so mad that her boyfriend made her see that movie and she was complaining the entire time. I was laughing pretty hard. It was pretty awesome.

KW: Thanks again for the time, Selena, and best of luck with all your endeavors.

See a video of Selena and The Scene singing "Who Says"

Special thanks to my intrepid intern, Richie von der Schmidt, for running a gauntlet through thousands of Selena's rabid fans to conduct the interview, many of whom had waited on line overnight for a chance to meet her at K-Mart in Philapdelphia.