By Helen Silvis of The Skanner News
Published: 23 June 2011 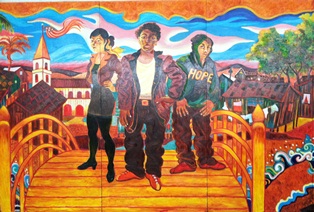 "Wow! I love this work." "These are amazing." "The colors are so vibrant, and look at those textures." Those were just a few of the comments from a group of people invited to the dedication ceremony for five stunning murals created by artist Arvie Smith and teens at Multnomah County Juvenile Detention Center. 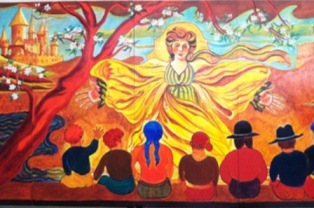 But Multnomah County chair Jeff Cogen may have said it best: "They are so moving. I'm far from an art critic, but it's hard not to feel it deep inside. You look at this work and it's so beautiful, emotional and inspirational." 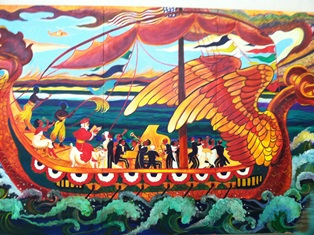 The murals are all part of Project Hope, created by Smith and more than 100 young people in detention, over the course of two years. Each one is rich with images and cultural references from America's multicultural heritage. And each tells a different story of hope. Smith, whose body of work has received international acclaim, mines the history of marginalized and disempowered people to create provocative, compelling images filled with beauty and meaning.
Mural; Project Hope
Carol R. Smith, RACC board chair (not the public schools superintendent), was one of the speakers at the dedication ceremony.  Creating art has a transformative impact, she said. And this project clearly had a powerful effect on the teens who worked with Smith.
"It really reaches their heart and soul and gives them a tool beyond the written word."

About 40 people were invited to the unveiling and dedication ceremony at the detention center, including representatives from Mayor Sam Adams office, representatives from the Regional Arts and Culture Council, Multnomah County staffers, detention staff and artists. They were lucky to be able to view all five murals together in one room. That won't happen again soon. At 8 feet by 15 feet, the murals are larger than life. But they were made in panels so they could easily be deconstructed and moved. 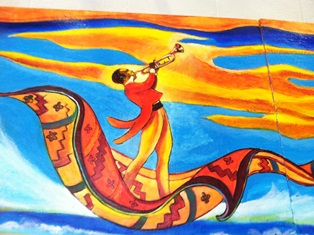 Two of the murals will stay in the detention center: one in the public lobby,  and the other behind locked doors where youth await trial or serve time. You will have a chance to view the other three murals in all their real-life splendor simply by visiting the downtown police precinct and the Multnomah County Courthouse. Eventually they will return home to the detention center to be a beacon of hope for the teens there. 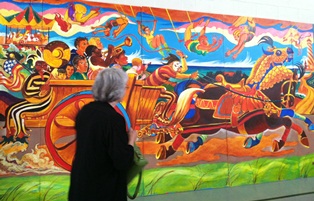 Funding for the project came from Multnomah County's 2 percent for art program, set aside in the mid-90s when the Juvenile Justice Center  was built.  The Regional Arts and Culture Council commissioned the project as part of its artist-in-residence program, 'Intersections'. 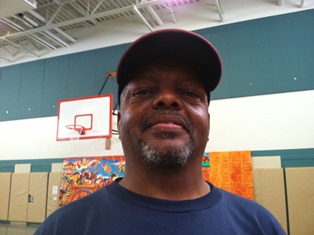 In his speech, Cogen talked about the value of art, especially in places of confinement and despair.
"It is going to change lives," he said. "We believe in the power of transformation and that there is potential in these young people: potential to contribute to our community. 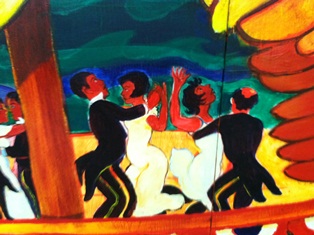 "They are learning they have something to offer and that they can be part of something bigger than themselves, something beautiful, something transformational."

Richard Hall, who has spent 19 years working with youth in the detention center, told the Skanner News that detention staff get close to the teens and want to see them succeed. 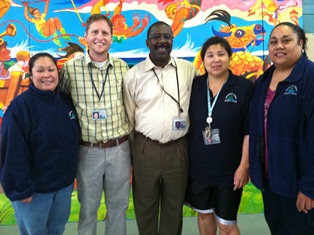 "We get all kinds of kids," he said. "Some should be here; others, it is their situation that got them here. We form relationships, and it's hard to see them come back." 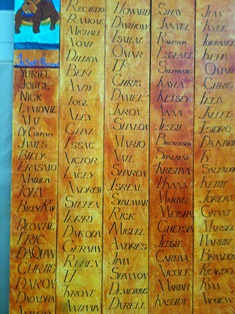 Hall said sometimes he will be out and about when he will hear his name called. A young man will come up and say 'Hi Richard, remember me?' Maybe he is now married, working, or a father living a normal, happy life.
"That happens sometimes," he said. "Just not often enough."
Artist Arvie Smith also spoke, quoting Cornel West and W.E.B. Dubois. But perhaps his most moving words were about the fate of those youth he came to know well during his time as their art teacher. 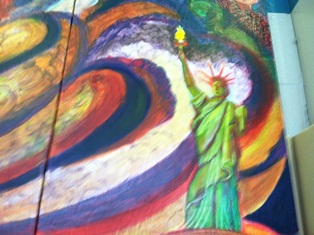 "We must show them the spirit of love and forgiveness that gives hope to those who have been cast aside," he said. 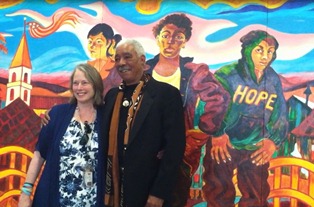 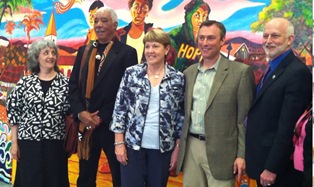 We must give them that."
The first names of the young artists who worked with Smith are etched into an extra panel. That panel is all the more poignant because at least one of those students is now dead: a victim of gun violence.