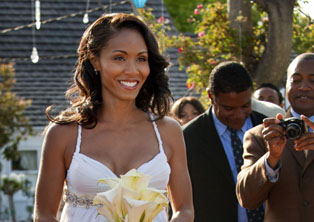 Jada Pinkett Smith stars as Christina Hawthorne in TNT's medical drama "Hawthorne." In the role of Chief Nursing Officer at James River Hospital, Christina is forced to juggle the roles and subsequent relationships that are demanded of her as a professional, mother, friend and love interest. Jada notably serves as Executive Producer on the show through Overbrook Entertainment following her initial foray into the role of Executive Producer of the "The Secret Life of Bees" starring Alicia Keys, Queen Latifah and Dakota Fanning.

The film captured hearts and went on to win two NAACP Image Awards along with two People's Choice Awards. More recently, Jada produced the global blockbuster "The Karate Kid" starring her son Jaden. Beyond the medium of film and TV, Jada together with her husband Will Smith and record industry mogul Jay-Z, produced the three-time Tony Award-winning musical "Fela'" which went on to enjoy a run in London at the National Theatre.

As an actress, Jada is perhaps best known for taking-charge in the hugely successful sequels "Matrix Reloaded" and "Matrix Revolutions." In addition, Jada has played pivotal roles opposite Tom Cruise and Jamie Foxx in Michael Mann's "Collateral," as well as alongside Meg Ryan and Annette Bening in the remake of "The Women."

Jada also teamed up with Adam Sandler and Don Cheadle in "Reign Over Me," and her voiceover work includes the role of Gloria in "Madagascar: Escape 2 Africa." Later this year, she will return in the sequel which will also feature her daughter Willow.

Jada is an avid writer and her children's book "Girls Hold Up This World" became a New York Times bestseller and continues to inspire girls all across the globe. A native of Maryland, Jada studied dance and acting at the Baltimore School for the Arts and at the North Carolina School of the Arts. Her big break came when she landed a role on the long-running NBC series "A Different World."

Here, she talks about the premiere of the third season of her hit TNT series, HawthoRNe, and about the challenge of handling the title role of Christina. The show airs on Tuesdays at 10 PM ET & PT / 9 PM CT.

Kam Williams: Hi, Jada, thanks for another opportunity to speak with you.

Jada Pinkett Smith: Hey, Kam. How are you?

KW:I'm fine. Congratulations on your third season of HawthoRNe! How does it feel?

JPS: Oh, it feels good. It really feels good. We're glad to be back, and I feel like we have an exciting season in store for all the HawthoRNe fans.

KW: What should fans be anticipating seeing on the show this season?

JPS: They should anticipate a highly-charged, dramatic, intense season with a lot of romance and adult issues. It's going to be a helluva ride!

KW:I told my readers I'd be interviewing you and asked them to send in questions. One of them, Lowery Gibson, says: Your character is marrying a white doctor this season. Are you concerned about the fans reaction?

JPS: No, not at all. I've been in a relationship with this particular doctor (Tom Wakefield played by Michael Vartan) for the last two seasons, so I'm not really concerned about that.

JPS: Well, this year, the most challenging aspect of the role is the fact that Christina goes through an extreme trauma starting with the first episode. This whole season has actually been very emotional and highly dramatic, so I would say that, overall, it's been a pretty difficult season to shoot.

KW:Judyth Piazza asks: What key quality do you believe all successful people share?

JPS: Our commitment. I think that's the key quality. You just have to keep at it. People who enjoy sustained success understand the fact that you have to remain very committed to whatever it is you're doing, especially in this instant-gratification culture.

KW: Judyth has a follow-up: What has been the most important moment of your life?

JPS: I'd have to say the birth of my children.

JPS: [Chuckles] I do work with them, just in a different capacity. It's kind of hard for mommy to be on screen at this point. Now that Jaden's getting a little older, his needs of me are different. There's definitely a project that he and I have talked about doing together. But first, I just have to make sure that he doesn't need so much of mommy off screen as well. He's getting to that point, so I definitely anticipate doing stuff like that with both of them when they're older.

KW: Harriet was also wondering whether you worry about the effect of celebrity on your kids, given the trouble so many child stars have handling fame.

JPS: No, this is part of their lives. They've been members of a very high-profile family since they were born. That's just what it is.

KW: Harriet's follow-up is: How do you prioritize doing a TV series? How does it fit into your family's extremely full schedule?

JPS: Everybody has to work around mommy's schedule when I'm working. Everybody has to stand down, basically. Willow and Jaden can't really do anything outside of L.A. That's just how we worked it out.

KW: Do you ever wish you could have your anonymity back?

JPS: Oh, I still have my anonymity whenever I want it. I have a great way of disappearing, and I'm able to do things people would never imagine. I'm often not recognized because I'm easy to hide if I change my hairstyle or put on a hat. I disappear very easily. That's not hard for me to do.

JPS: Probably walking to school by myself in the first grade. [Laughs]

KW: I just baked a homemade pizza today, myself. It had an herbed, whole wheat dough, and was topped with mushrooms, onions and fresh garlic.

KW: The Taboo: What's the best thing about being a parent?

JPS: The love of a child is different from any other type of love on the planet. And being loved by your children is a love that is immense. I'm always so overwhelmed by how much my children love me. I think the best part of being a parent is feeling the love of a child.

KW:Janice Malone asks: What are one or two pieces of advice that you've given your kids about being an actor?"

JPS:I try to stay out of their way and kind of just let them discover things for themselves. Our job as parents is more to keep other people out of their way, so they're free to discover what works for them on their own.

KW: Thanks for another great interview, Jada. And I appreciate you're taking a break from your busy shooting schedule on the set to talk with me.

JPS: No problem, Kam, you have a great evening.