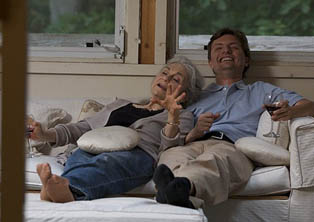 In 'Hello Lonesome,' Eleanor (Lynn Cohen) is an attractive and active senior citizen who lives alone in a sprawling suburbia where an automobile is critical to maintaining a connection to the rest of civilization. For this reason, she's beside herself the day the Department of Motor Vehicles refuses to renew her driver's license on account of her failing eyesight.

Unfortunately, Eleanor compounds the sudden transportation problem by impulsively selling her classic Thunderbird, forgetting how much it still serves as a nostalgic reminder of a lifetime of pleasant adventures alongside her dearly-departed husband. Nevertheless, she manages to continue running her daily errands by relying on the charity of the handsome next-door neighbor (James Urbaniak) she's barely interacted with before.

Soon, however, the well-preserved widow finds herself leaning on the very-accommodating young man's shoulder not merely for rides but emotionally, too, subtly hinting at a desire for a degree of intimacy by admitting how much she misses hugging and spooning in bed. And Gary reciprocates by expressing his regret that his icy ex-wife was never inclined to cuddle.

Despite a playful exchange of "I could be your mother!" and "You could be my grandmother!" the acknowledged difference in their ages does nothing to discourage this pair. Thus, it isn't long before the two lonely hearts are sharing nightly sleepovers, even if perhaps initially more out of convenience than passion.

The same can't be said about Gordon (Nate Smith) and Deb (Sabrina Lloyd), a couple of strangers who meet on the internet and rendezvous to use each other for what was just supposed to be a wanton, one-night stand of acrobatic carnality. They unexpectedly fall head-over-heels for each other and continue to date, although a fly later lands in their lubricating ointment when a lump in her breast is diagnosed as a cancerous tumor. Will Gordon bail on the budding relationship or stick around to help his terrified partner battle the disease?

While awaiting the resolution of that intriguing scenario, this absorbing triskelion sets up one other storyline. Bill (Harry Chase) has just been dumped by his wife, and his emotionally-estranged daughter is no longer taking his calls. As a voiceover actor working out of his home studio, he's already been something of a recluse. Now in need of more human interaction, the normally taciturn hermit reaches out to his express package deliveryman (Kamel Boutros) in friendship, but the overture is first mistaken for a romantic pass.

This trio of discrete tales revolving around unlikely bedfellows fuels the fires of Hello Lonesome, a palpably-realistic, melancholy mood flickmarking the auspicious script and directorial debut of Adam Reid. Congrats to rookie Reid for crafting such an endlessly-amusing, slice-of-life screenplay, for finding the right cast to execute that vision, and for adding the rest of just the right ingredients to the recipe for a satisfying, cinematic stew best served steamy, sentimental and sobering!

To see a trailer for Hello Lonesome, visit: