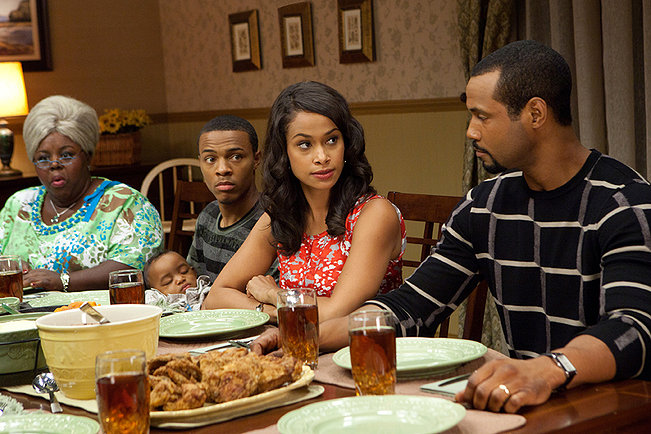 NFL player-turned-actor Isaiah Mustafa became famous almost overnight in 2010 as the result of starring in a series of Emmy-winning Old Spice TV commercials. Serving as pitchman for the phenomenally-successful "The Man Your Man Could Smell Like" campaign also transformed Isaiah into an internet sensation when the ads and several spinoffs subsequently went viral, enjoying hundreds of millions of hits on Youtube.

Soon thereafter, he was named one of People Magazine's "Most Beautiful People of 2010," and Tyler Perry announced on Oprah that Isaiah would be playing a lead role in "Madea's Big Happy Family." Additionally, he will be seen in July in "Horrible Bosses" opposite Jennifer Aniston, Jason Bateman and Kevin Spacey.

He currently resides in Los Angeles and when not acting enjoys sports, fitness, gaming, comic books and his two Rhodesian Ridgebacks. Here, Isaiah reflects upon his meteoric rise and his performance as Calvin in the latest Tyler Perry morality play.

Kam Williams: Hi Isaiah, thanks for the interview.

Isaiah Mustafa: Hi, how are ya?

KW: Very well, thanks. What interested you in Madea's Big Happy Family?

IM: Other than the fact that I'm in it? [LOL] Everything! What wouldn't interest me about it? People really love Madea movies and get a kick out of them.   They're phenomenally successful. People get excited when a new one's coming out. So, for me to be in that also, can you imagine?

KW: Tell me a little about your character, Calvin?

IM: He's just a genuinely good guy. If it needs to be done, ask Calvin.

KW: How was it like being directed by Tyler Perry?

IM: For me, it was probably the best possible intro into playing a lead in a movie. The process was very educational for me, and he made it flow naturally. He was both easy to work with and to get along with. So, it was awesome for him to be so patient with me. All in all, it was a really great experience.

KW: And how did you like working with such a big-name cast?

IM: It was an honor. I was like, "Wow!" and just grateful to have the opportunity to play with so many people whose work I've admired for so long.

KW: Harriet Pakula Teweles says: The Old Spice commercials are pretty fast paced and upbeat. How many takes to get it perfectly done and how is it possible for you and the crew to not crack up laughing during the shoots?

IM: In terms of the takes, we normally rehearse several times over the course of 4 or 5 days so that by the last day it's like a well-oiled machine. And as far as cracking up, if I laugh halfway through, it would ruin the take and everybody would have to reset. And that reset is about 15 to 25 minutes. So, there's a lot of pressure to nail it. You don't want to mess up.

KW: Harriet also asks: Where did you take harder "hits" – on the football field as a wide receiver or on the set shooting those Old Spice ads as an actor?

IM: In acting, the hits you take are in doing the same thing over and over and over again. Football is different, but at some point you're going to need a hot bath and a massage after any sort of grueling activity.

KW: What's it like to become famous overnight from a TV commercial?

IM: At some point you just have to give thanks to whatever's out there controlling the pace, and enjoy the process while it's happening.

KW: Marcia Evans asks: I became an admirer of yours after viewing an Old Spice commercial for the first time! It's apparent that you are health conscious.

Do you have any aspirations to bring health and fitness to our community, particularly to our youth?

IM: I'm not on a council and I haven't started a non-profit, but being that I have a child in elementary school, I'm always encouraging kids to stay active. My daughter's doing gymnastics.

KW: Larry Greenberg says: My son and I use Old Spice mainly because you are so funny. I have kind of a personal question. What deodorant do you use?

KW: Judyth Piazza asks: How has smelling like a man changed your life?

IM: [LOL] That's an interesting question because that implies that I haven't always been a man. Well, considering that I've always been a male, it hasn't changed all that much. Maybe it's a little more dynamic. How about that?

KW: How has life in general changed for you since Old Spice? Do you get stopped in public a lot?

IM: It's not that different. Sometimes people come up and talk to me and say they like my work. And I smile back and say, "Thank you." People are very polite.

KW: Did you have any sense when you were shooting the first add how big they were going to be?

IM: No, not at all. I don't think anybody could predict a phenomenon like that.

KW: Editor/Legist Patricia Turnier asks: When did you discover that you had an interest and talent for acting?

KW: Patricia has a follow-up: Which actors inspired you when you were a kid?

IM: I really liked Eddie Murphy and Bill Murray. They could entertain me for hours on end. Also Chevy Chase.

KW: Finally, Patricia says: There are many kids who want to become celebrities without getting an education first. Can you share with the youth how it was useful for your career to get a solid college education?

KW: Since you have an Arabic name, Tony Noel was wondering whether you're a Muslim, how that has affected your career choices, and if you've been impacted personally by the negative sentiment in the U.S. about Islam?

IM: I don't answer questions that have religion involved in them, so we can move on to the next one.

IM: [Chuckles] It was an honor that someone would categorize me as a beautiful person.

IM: No, because I'm really happy about any question that's not being asked.

IM: Not about stuff I can't control.

IM: At this particular moment, yes.

IM: About 10 questions ago when you asked me that crazy question about smelling like a man.

IM: The TV show iCarly. I watch it with my daughter all the time.

IM: [Laughs heartily] Sorry, I'm not much of a cook. I make a lot of shakes, and eat some fruit, but I generally keep it moving. I don't sit down and have meal too often, unless I go out for dinner. Right now, I'm on a vegan diet.

KW: What type of exercise regimen are you on to stay in such great shape?

IM: It's really basic. Lots of push-ups, pull-ups and sit-ups. But I'm doing something athletic all day long. [Laughs]

IM: My reflection through glass that has been pelted with toothpaste, along with a few affirmations that I've written on it.

IM: Come on! That's such a potentially polarizing question. I'd wish for a bag of extra wishes.

KW: The Rudy Lewis question: Who's at the top of your hero list?

IM: I just want to be remembered.

KW: Thanks again for the time, Isaiah, and best of luck with the film and the ads.