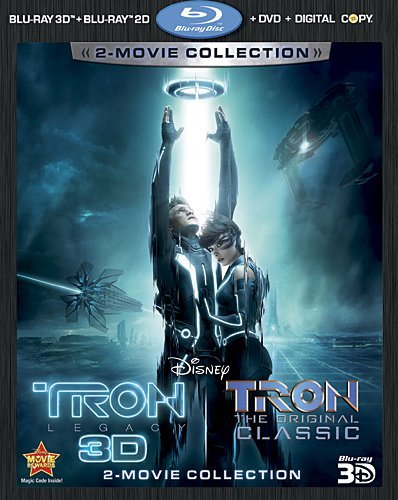 Released in 1982, the original TRON was a futuristic thriller starring Jeff Bridges as Kevin Flynn, a programming genius/video arcade owner who somehow ends up physically deconstructed and teleported to a digital world after hacking into a software company's mainframe computer. Then, while lost in cyberspace, he's forced to survive by participating in a series of life and death gladiatorial games.

Set 20 years later, TRON: Legacy revolves around Kevin's orphaned son, Sam (Garrett Hedlund) search for his dad after being accidentally sucked into the same parallel universe. Soon captured, he proves to be no match when pitted in an arena battle against CLU (Codified Likeness Utility), a diabolical digital copy of his long-lost father programmed for evil.

Sam is saved in the nick of time by Quorra (Olivia Wilde), a warrior who arranges a father-son reunion at a hideout off the grid in a place called the Outlands. From this point forward the trio's quest is essentially to find the portal back to reality.

Worth its while for the next generation special f/x alone, especially when witnessed in 3D, TRON: Legacy marks the directorial debut of Joseph Kosinski. For the engaging plot takes a back seat at every turn to the magical roller coaster ride provided by the visually-captivating cinematography featuring an ethereal landscape highlighted in neon.

Note: Should you opt to invest in the 5-Disc Combo Pack, your reward will include not only the original TRON and its extras, but the Blu-ray 3D, Blu-ray 2D DVD and Digital Copy versions of TRON: Legacy, as well as a smorgasbord of featurettes.