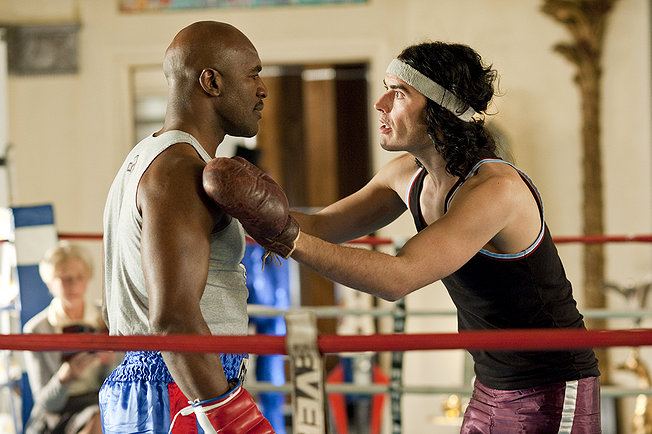 Bon vivant Arthur Bach (Russell Brand) stands to inherit a billion dollars as the sole heir of a fortune controlled by his widowed mother, Vivienne (Geraldine James). But because the eligible bachelor's been nothing but a constant source of embarrassment, the imperious, family matriarch is considering cutting him out of her will entirely.

For this flamboyant flexisexual's tawdry exploits always seem to end up splashed across the tabloids, whether he's being caught exposing himself in a limo by the paparazzi or waking up in bed with a couple of teenage transvestites. Worst of all, Arthur's also a staggering, speech-slurring drunk who carries a flask and seizes on any flimsy excuse to imbibe. Consequently, his only close friend is Hobson (Helen Mirren), the loyal nanny/confidant who's been tucking him into bed and reading him to sleep at night since he was a toddler.

Fed up with watching her reckless offspring fritter away both his trust fund and his future, Mrs. Bach decides that settling down with a socialite is the only way that her petulant playboy will ever be forced to mature. So, she secretly arranges for him to wed Susan Johnson (Jennifer Garner), the daughter of a Manhattan real estate tycoon (Nick Nolte).

Against his better judgment, Arthur agrees to proceed only after his mom levels an ultimatum: either marry her or lose your inheritance. The engagement is announced and soon New York City is abuzz about the impending nuptials with Town & Country Magazine devoting a cover story to the high-profile couple.

Meanwhile, Arthur becomes consumed with overwhelming regret when he wakes up to the fact that his heart already belongs to Naomi Quinn (Greta Gerwig), a free-spirited tour guide he recently met inside Grand Central Terminal. He suddenly knows that she's the one for him, even though she's just a commoner who still lives with her dad (Peter Van Wagner) in a modest tract house in Queens.

It's not long before Arthur shares his misgiving with Susan about the "macabre conspiracy to railroad us into a loveless marriage." However, his bride-to-be will have none of it, nor will his mother who is mortified to learn of his association with a lowly lass from the wrong side of the tracks. Thus, Arthur finds himself on the horns of a dilemma: whether to forsake a limitless fortune to be with the woman of his dreams or to enter a marriage of convenience to continue living in the lap of luxury.

So unfolds Arthur, an ill-advised remake of the 1981 classic co-starring Dudley Moore and Liza Minelli, and for which Sir John Gielgud won an Academy Award playing Hobson. First of all, I'd like to think that our sensitivity about alcoholism has evolved over the intervening years to the point where we consider it a serious affliction, and wouldn't want to be so callous as to laugh at a lead character hopelessly in the grip of the disease, anymore than we'd find a film revolving around a hapless heroin addict hilarious.

The second major flaw is that where Moore imbued Arthur with an impish, endearing vulnerability, Russell Brand interprets him as a brazen and unapologetically-audacious lout. Maybe that's more in line with the mindset of a spoiled-rotten, 21st Century schizoid heir, but it also makes for an awfully-unlikable protagonist.

Even this version's anti-climactic finale is an almost insulting, tension-free afterthought which pales in comparison to the original's exuberant Hollywood ending with a cherry on top. Arthur 2.0, not exactly an upgrade.

To see a trailer for The Arthur, visit  The Skanner News Video